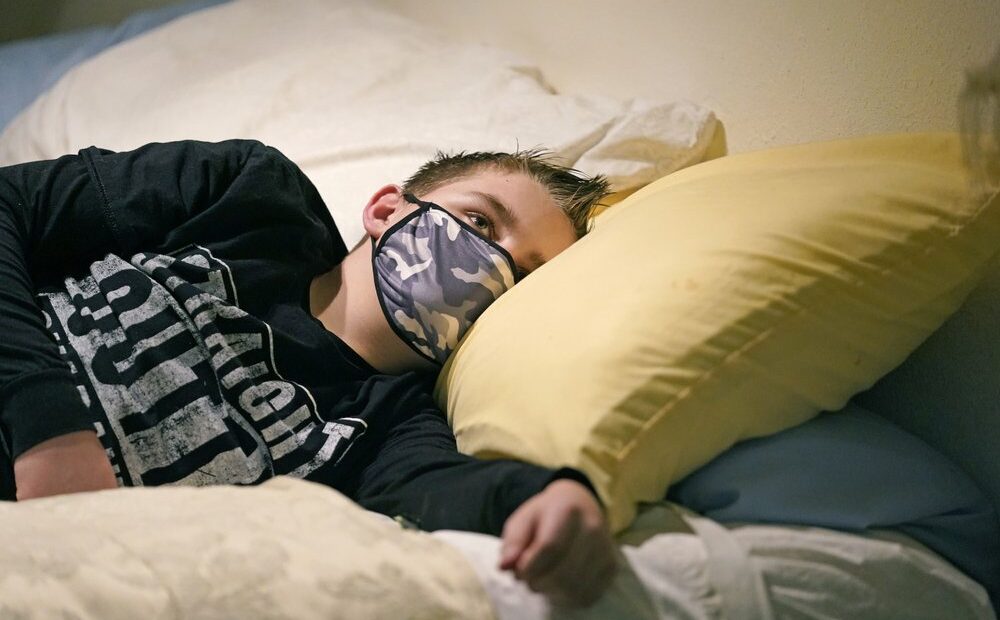 Kale Wuthrich watched doctors surround his son in the emergency room, giving him fluids though IV tubes, running a battery of tests and trying to stabilize him. He was enveloped by the confusion and fear that had been building since his 12-year-old suddenly fell ill weeks after a mild bout with the coronavirus.

“He was very close at that point to not making it, and basically they told me to sit in the corner and pray,” Wuthrich said. “And that’s what I did.”

Shortly after Thanksgiving, the boy from a secluded valley in Idaho became one of hundreds of children in the U.S. who have been diagnosed with a rare, extreme immune response to COVID-19 called multisystem inflammatory syndrome in children. Cooper Wuthrich’s fever spiked as his joints and organs became inflamed, including his heart, putting his life at risk, his father said.

“Cooper had it in every organ, in his joints; his feet were swelled up the size of mine, his poor eyes were red, bugged out of his head and very lethargic, very scared,” Kale Wuthrich said. “Cooper would never, has never complained about pain, but that’s all he could do was tell me how bad he hurt.” 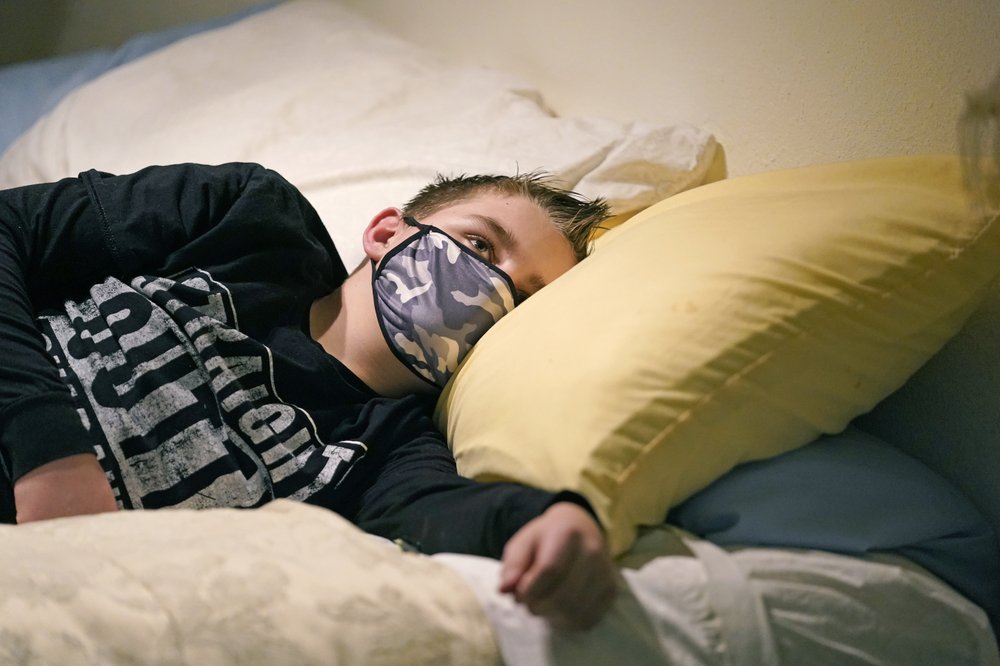 Cooper Wuthrich rests as he lays on a bed at the truck stop his family partly owns Tuesday, Dec. 15, 2020, in Montpelier, Idaho. Shortly after Thanksgiving, Wuthrich, 12, became one of hundreds of children in the U.S. diagnosed with a rare COVID-19 complication that landed him in an emergency room three hours away from his tiny hometown in a secluded Idaho valley. The boy’s parents say he nearly died and their terrifying experience shows why people should wear masks in a conservative state where pushback can be fierce. CREDIT: Rick Bowmer/AP

After days in the hospital, Cooper is back home. But the kid who loves sledding and skiing spent much of the following days on the couch in the lounge of the Montpelier, Idaho, truck stop that his parents partly own. A short walk left him with a bloody nose, and he’s still on medications that require twice-daily injections.

For Cooper’s parents, his illness deepened their commitment to wearing masks and urging others to do so, though pushback can be intense in conservative Idaho. Hundreds of people have protested mask requirements for months, even forcing one Boise health official to rush home this month in fear for her child as protesters blasted a sound clip of gunfire outside her front door.

Opposition to restrictions is strong even as coronavirus patients fill Idaho hospitals. Gov. Brad Little warned that car crash victims could need to be treated in hospital conference rooms if beds run out. He’s encouraged people to wear masks but is among about a dozen governors who haven’t issued a statewide mandate.

Cooper caught the virus in late October, likely at school, which is open for in-person classes without a mask requirement, said his mother, Dani Wuthrich.

“He had got himself grounded, and so he hadn’t been allowed to go anywhere except for to school,” she said. “We kind of don’t know anywhere else he could have gotten it besides school.”

He recovered in a few days and was back to playing basketball after a two-week quarantine.

But as Thanksgiving approached, Cooper called to come home from practice, unusual for a kid with bottomless energy. His fever spiked above 103 degrees, and the medicine his parents gave him didn’t help. He was throwing up; he tossed and turned at night.

As the days wore on and Cooper’s fever refused to break, his parents rushed him to a local hospital, where doctors ran tests to try to figure out what was wrong. Not seeing improvement and suspecting appendicitis, they loaded him into an ambulance for a three-hour white-knuckle drive through the mountains to Primary Children’s Hospital in Salt Lake City.

Cooper is one of about 40 kids treated for the inflammatory syndrome at Primary Children’s, said Dr. Dongngan Truong, a pediatric cardiologist who is helping with a study on the illness.

“Luckily, it is a rare complication, but it’s a complication that can get kids pretty sick pretty quickly,” Truong said. “We need to take it seriously, because we don’t know the long-term effects on the child’s body, the heart, the other organ systems.” 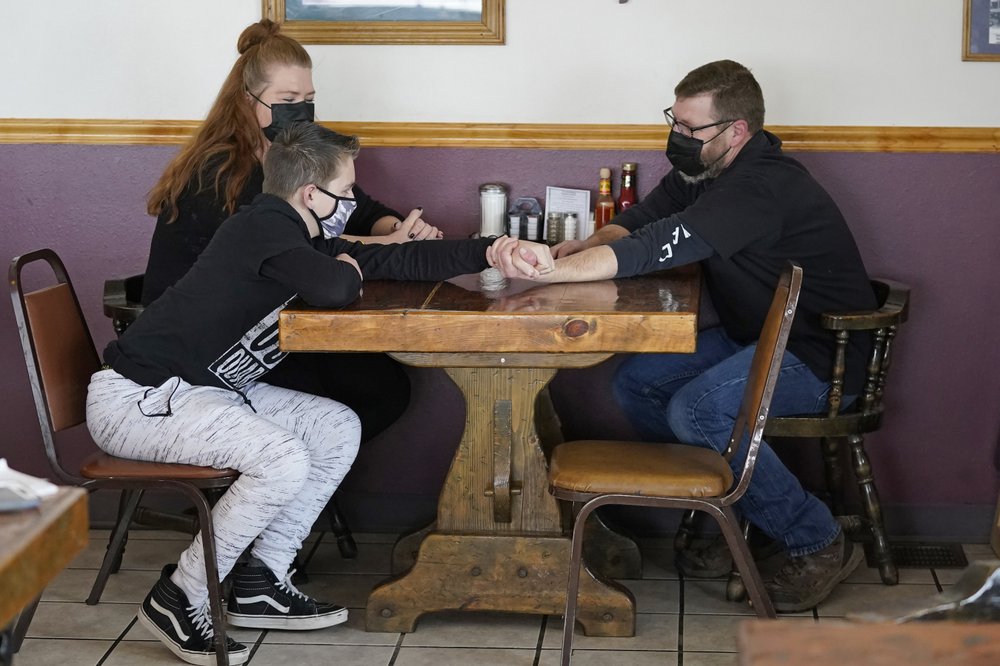 Cooper Wuthrich reaches for his father Kales hand as his mother Dani looks on at the Ranch Hand Restaurant at the truck stop his family partly owns, Tuesday, Dec. 15, 2020, in Montpelier, Idaho. CREDIT: Rick Bowmer/AP

An August report from the Centers for Disease Control and Prevention found that many children with the condition had severe complications, including inflammation of the heart and kidney damage. In nearly two-thirds of cases, children went to intensive care units, and the average ICU stay was five days. It found Hispanic and Black children made up three-quarters of those with the syndrome.

A total of 1,288 kids nationwide had been diagnosed with the syndrome as of Dec. 4, and 23 had died, according to the CDC.

The root seems to be a dysfunction of the immune system, which kicks into overdrive when exposed to the virus, releasing chemicals that can damage organs. Symptoms include fever, abdominal or neck pain, vomiting, diarrhea, rash, bloodshot eyes and fatigue.

It can be tricky to identify at first because some kids have such mild COVID-19 symptoms that parents didn’t know they had the virus until the inflammatory syndrome appears, Truong said. It’s unclear why some children get the syndrome and others don’t, so the only way to prevent it is to stop kids from getting the virus, with steps like masks and social distancing, she said.

Back home in Idaho, the Wuthriches are trying to persuade friends and family to take precautions. To a hunting buddy, Kale Wuthrich made his case for mask-wearing by comparing it to the camouflage he puts on his face while staking out deer.

They require masks for employees at their truck stop and restaurant, Ranch Hand Trail Stop, where they worked their way up from dishwashing and serving to part owners.

But they can’t always get customers to wear masks at the outpost along a windswept highway edged by mountains, its peaked roof and white-clapboard walls standing out as a refuge for long-haul truckers. Recently, plenty of people without face coverings passed by a cowboy mannequin with an American flag-patterned mask set up at the entrance to the restaurant.

“We really wish that they would instate a mask mandate here in our county,” Dani Wuthrich said. But “I don’t think that will ever happen.”