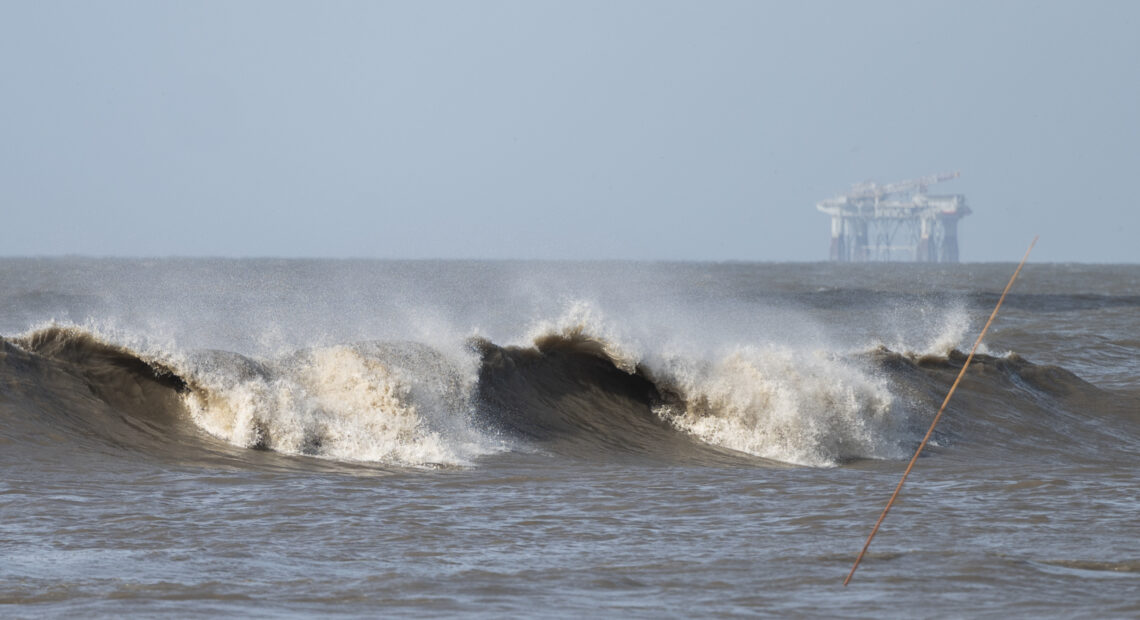 It’s no surprise that the oil industry had a terrible, horrible, no good, very bad year. Oil powers the vast majority of the global transportation system, and the pandemic froze most of the world’s population in place.

But set aside the pandemic. Ignore the collapse in demand. Forget about the time oil prices went negative. Look at everything else that happened this year, and —

Between hurricanes, geopolitical rivalries, irate investors and climate pressures, oil producers faced a host of challenges that weren’t created by the coronavirus — and can’t be cured with a vaccine.

In the Gulf of Mexico, the amount of oil production lost because of storms was about six times higher than the recent average, according to Sami Yahya, an analyst with S&P Global Platts. 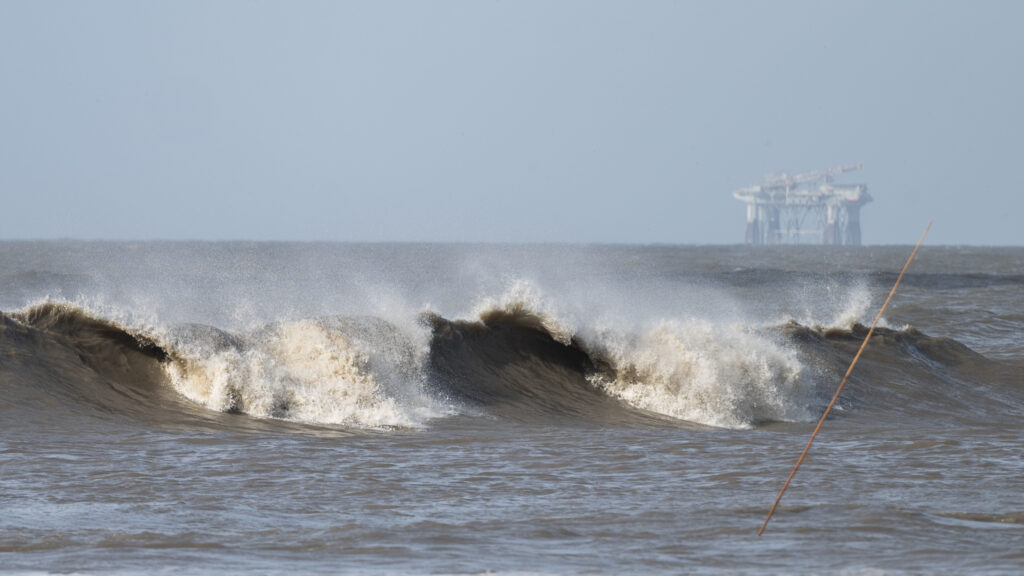 Hurricane Laura sends large waves crashing on a beach in Cameron, La., on Aug. 26 as an offshore oil rig appears in the distance. The most active hurricane season on record was just one of many challenges facing the oil industry this year — aside from the attention-grabbing crisis of the pandemic.
CREDIT: Andrew Caballero-Reynolds/AFP via Getty Images

“The worst offender was Hurricane Delta, which cut Gulf of Mexico production by just about 92%,” Yahya says. Then, just as the industry was about to recover from Delta, Hurricane Zeta swept in. (The names themselves are a sign of just how brutal this year was: So many powerful storms formed this year that, for just the second time, forecasters ran out of names and had to resort to Greek letters.)

Markets didn’t react much because there was so much surplus oil that refineries didn’t see any interruption. But producers felt a hit. And while any given storm season may be an outlier, in general, global warming is expected to make hurricanes more powerful and destructive.

Meanwhile, U.S. shale producers were bracing for a brutal 2020 even before most Americans had heard of social distancing.

“Prior to COVID — actually, days prior to the lockdowns — we had entered into a market share war,” says Sarp Ozkan, a director of energy analysis at Enverus Market Intelligence. Russia and Saudi Arabia were slashing prices, each trying to seize a larger slice of the global oil market. Not so coincidentally, those low prices were devastating for U.S. shale producers, whose explosive growth made the U.S. the top oil producer in the world.

A few years ago, the U.S. oil industry survived such a price war just fine. But back then, they had the support of investors eager to pour money into the U.S. oil patch. By last year — well before the pandemic — investors were getting increasingly frustrated.

“Wall Street finally decided, ‘Hey, we’ve given you a lot of capital and you have sunk it into the ground. But we haven’t seen any of those returns that we’ve been expecting for a long time,’ ” Ozkan says. Investors weren’t willing to put up more money until shale producers proved they could be profitable.

U.S. producers were starting to sweat. Then the coronavirus lockdowns rewrote the script for 2020, with the market share war replaced by a frantic struggle to stabilize crude prices.

Today, U.S. producers can point to the pandemic to explain their current woes. But in an alternate reality where the pandemic never happened, Ozkan argues the final outcome — companies merging and slashing investments, the entire U.S. industry shrinking — would be oddly unchanged.

“Either way, I think we would have ended up with sort of the same sort of scenario,” he says.

Then there’s the even bigger, more fundamental challenge for the industry: its future viability in a world fighting climate change.

The pace of the “energy transition” — the shift away from carbon-emitting coal, oil and natural gas and toward zero-emission power sources, electric cars and electrified houses and even clean trucks, planes and ships — appears to be accelerating.

To be clear, the world is not currently on track to meet its climate goals. It would take a massive transformation for the global economy to end its reliance on petroleum, which is woven throughout virtually every aspect of modern life. But a growing number of powerful figures, including political leaders and business titans, are describing that shift not as idealistic but as urgent — even inevitable.

You hear it from investors: At the beginning of this year, Larry Fink, the powerful CEO of BlackRock, the world’s largest asset manager, said climate change would be at the heart of his firm’s investment strategy. By the end of it, JPMorgan Chase and the New York State pension fund announced plans to shift their investments away from carbon-emitting industries. A new activist investor group is pushing Exxon to pivot so it could still be profitable in a world weaning off oil. And as investment dollars pull back from oil and gas exploration, electric vehicle start-ups and renewable energy firms are soaring on Wall Street.

You hear it from executives: This summer, European oil giants BP, Shell and Total warned that oil demand would peak soon, if it hadn’t already, and announced they were ramping up investments in renewables. Even producers who do not embrace renewables, such as many American oil companies, are voluntarily nodding to climate concerns in their earnings announcements.

And, perhaps most significantly, you hear it from regulators. This year China surprised the world with new, ambitious carbon targets. California, which exerts powerful influence over the U.S. auto industry, set a landmark law calling for zero-emissions semitrucks and announced a future ban on new gas- and diesel-powered cars. Colorado set new, strict limits on methane emissions from oil and gas producers. Denmark ended new oil and gas exploration.

And, showing just how quickly sentiments are shifting, the U.K. accelerated its plans to prohibit the sale of gas- 0r diesel-powered cars not once but twice. In February, it moved the target from 2040 to 2035. Then, in November, it pushed it up to 2030.

Amy Myers Jaffe, managing director at the Climate Policy Lab at the Fletcher School at Tufts University, says these decisions were not triggered by the pandemic.

“All these things I believe would still have happened,” she says. “They just intensified because of the collapse in oil demand, but all of those trends were coming.”

For oil companies, this creates a monumental challenge. They make multibillion dollar investments that won’t pay off for years. A drop in oil demand would make many of those investments unprofitable. That means companies today are at a crossroads, having to decide which future to plan for: a world still built on oil, or one transformed to be greener.

As the Biden administration takes office and works to restrict drilling on federal lands and promote climate-friendly technology, the pressure will only mount.