Reactions from Northwest elected officials are coming after a day of chaos at the U.S. Capitol.

Rep. Cathy McMorris Rodgers (R-Washington) released a statement: “What we have seen today is unlawful and unacceptable. I have decided I will vote to uphold the Electoral College results and I encourage Donald Trump to condemn and put an end to this madness.”

McMorris Rodgers previously said she would object to election results during the process in Congress Wednesday. She also previously supported a lawsuit by Texas’ Attorney General that sought to challenge the presidential election results. The Supreme Court denied to hear the case.

Earlier McMorris Rodgers had tweeted: “Stop these attacks on Capitol Police who serve to protect the People’s House. Protesting peacefully is your right. Violence, aggression, and breaching security perimeters are not. Stop this now.”

Stop these attacks on Capitol Police who serve to protect the People’s House. Protesting peacefully is your right. Violence, aggression, and breaching security perimeters are not. Stop this now.

Rep. Jaime Herrera Beutler (R-Washington) on her Facebook page: “I was on the House floor as the protesters overran police and pounded on the doors. The Capitol Police barricaded us in. We were told to get down and to get our gas masks. Eventually, we were ushered out. Capitol police who were escorting me told me they had found and detonated four bombs just off the Capitol campus. I am currently safe and sheltered in place. We are locked down because the Capitol is not secure. The reports you are hearing about the chaos, panic and dangerous actions by protesters are not exaggerations. I witnessed them. Is this the America we want to give to our children? A country of lawlessness and mob rule? Previous generations of Americans have laid down their lives to answer ‘no’ to that question. Do we want to be the first generation selfish enough to say ‘yes’? If we do, then what makes us a better nation than Iran or Russia?” 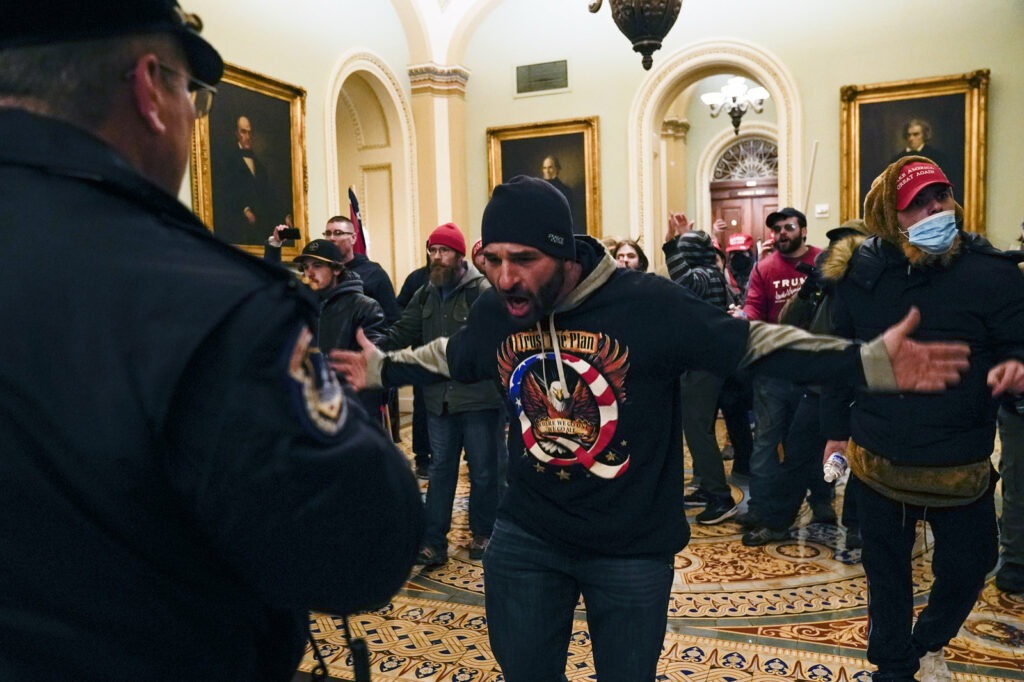 Protesters gesture to U.S. Capitol Police in the hallway outside of the Senate chamber inside the Capitol on Wednesday.
CREDIT: Manuel Balce Ceneta/AP

Sen. Mike Crapo (R-Idaho) tweeted (1:10 pm): “The violence we are seeing at the Capitol is wholly unacceptable. It must be stopped immediately and all perpetrators prosecuted to the fullest extent of the law. God bless the Capitol Police, National Guard and other law enforcement on the scene here and at other sites.”

Rep. Dan Newhouse (R-Washington) tweeted (12:20 pm): “I wholeheartedly condemn this violence. This is not who we are, and this needs to stop immediately.”

I wholeheartedly condemn this violence. This is not who we are, and this needs to stop immediately.

Sen. Patty Murray (D-Washington) tweeted: “In response to questions about my safety: I’m safe and so is my staff, but I condemn in the strongest terms the hate-fueled violence we are seeing in our nation’s Capitol today, as should every leader committed to the peaceful transfer of power in our country.”

Rep. Adam Smith (D-Washington): “My staff and I are safe. This attempted coup and domestic terrorist attack needs to end immediately.”

Rep. Marilyn Strickland (D-Washington): “In the end, I am optimistic that the election will get certified, but I don’t think anyone who came to work today on the hill expected this to happen. You know, we knew there would be protests, and people have a right to protest, but to breach security, to storm a building, to go inside the Capitol without permission, and I tell people you have to go through security just to come in even to go on a tour. So for this to happen, it’s unfortunate and it’s a shock to everyone.”

Rep. Rick Larsen (D-Washington): “Thank you to the Capitol Police for helping to safeguard democracy today. I am sorry that people are treating the you with such disrespect. To all: I am currently safely sheltering in place waiting for debate to start again and preparing to vote NO on the AZ objection.”

Rep. Kim Schrier (D-Washington) tweeted (12:17 p.m.): “Thank you to everyone asking about my safety. I am safe. I am VERY worried about the state of our country, and flabbergasted that our president has not put a stop to this. I am also worried about the health and safety of the Capitol Police, and thank them for their service.”

Idaho Democratic Party chairwoman Van Beechler: “Because our Republican leaders in Washington have encouraged and refused to stand up to President Trump’s deliberate attack on the Constitution and the legitimacy of our elections, they are responsible for the unrest that is occurring. Congressman Russ Fulcher, Congressman Mike Simpson, Senator Jim Risch and Senator Mike Crapo all share responsibility for today’s events, along with every Republican official who chose to prioritize political power over preserving our democracy. We hope Idahoans will stay safe and remain peaceful during this time, and that state officials are prepared to keep our legislators safe as we approach the legislative session.”