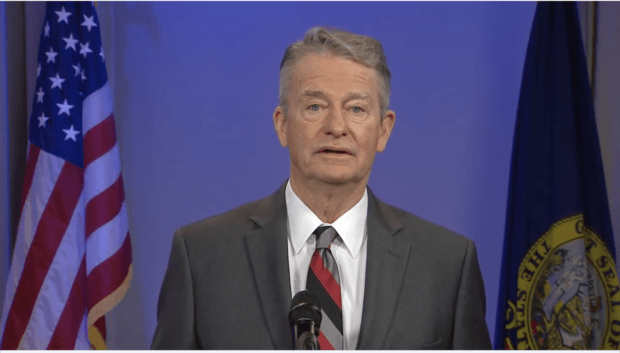 Originally posted on IdahoEdNews.org on January 22, 2021

Friday’s announcement represents a major escalation of the showdown between Little and legislators who are seeking to repeal the statewide emergency declaration and pick apart aspects of a separate public health order.

ALSO SEE: A Showdown Between Idaho’s Governor And Legislature Could Define The 2021 Session

The significance of Little’s remarks cannot be overstated. He accused members of his own Republican Party of knowingly pushing myths and misinformation for political gain and jeopardizing the state’s coronavirus response just as the vaccine is circulating.

“We are in the final lap of the pandemic fight and the finish line is close,” Little said. “We are so close to returning to normal. But all that success is threatened by the action taking place in the Legislature right now.”

Little did not single out legislators by name.

“Some members of the Idaho Legislature are seeking political gain by perpetuating this misinformation about emergency declarations,” Little said. “They are playing politics, and unfortunately the loser in this shameful game will be you — the citizens of Idaho.”

It didn’t take legislators long to respond with strong words of their own.

“Members of the House Republican Caucus will continue to work to address the concerns of the Idaho families whom they represent,” House Republicans said in a written statement. “The inflammatory comments from the governor’s office do nothing but complicate the process.”

House Republicans went on to call for Little to work with them through the process.

Not pulling any punches, Little called on the Legislature to quit pretending there is no emergency. COVID-19 is undeniably an emergency, he said, and the emergency order provides access to federal funding to manage the crisis. The emergency order does not shut the state down or take away citizens’ rights, he said.

“Amazingly, some in the Idaho Legislature are perpetuating that myth and actively seeking to end Idaho’s COVID-19 emergency declaration,” Little said.

Major General Michael Garshak, the adjutant general of the Idaho National Guard, said it would be “negligent” to repeal the emergency declaration.

Little has called up Idaho National Guard troops to assist food banks and help distributing and administering COVID tests and vaccines across the state.

“Currently every state in the nation is using their National Guard to respond to this emergency,” Garshak said. “At a moment like this, just as the guard begins distributing and administering the vaccine, it is not the time to stand down. Cancelling Idaho’s emergency declaration would do just that.”

Little said the state’s pandemic response has not been perfect, but he said he strived for balance. Little said there is evidence of success: Idaho prevented a crisis with hospital capacity, built up a record budget surplus and kept the economy and schools open longer than most other states.

Little ended his 14-minute address by asking the public to call their legislators and demand they keep the emergency order in place.

Little had some backup heading into his announcement. Moments before Little took the podium, the powerful Idaho Association of Commerce and Industry issued a statement expressing concern with the consequences of repealing the emergency declaration.

IACI voiced strong support for Little and said the emergency order gives access to funding and resources and supports the National Guard helping communities in a time of need.

“It unlocks resources to help thousands of businesses to get back on their feet,” IACI said.

More reading: Little also spelled out his concerns in a guest opinion Friday.