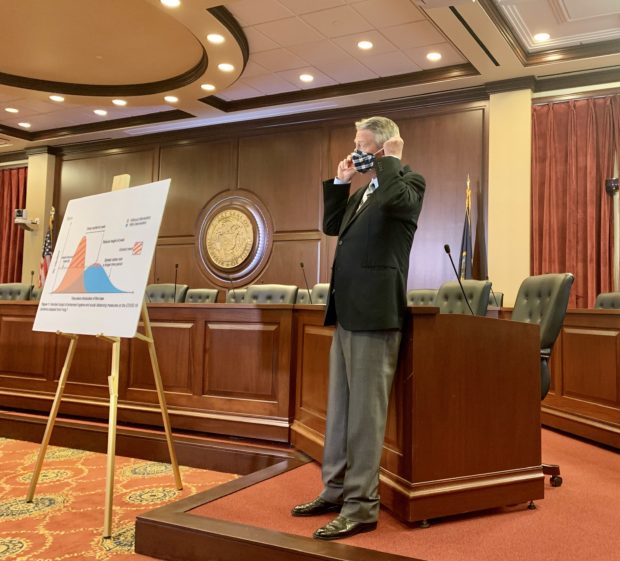 Lawmakers in the Idaho state House on Thursday initiated a third attempt to pass legislation to trim the governor’s powers during an emergency such as a pandemic.

Republican Rep. Jason Monks said the state’s current system giving extensive powers to the executive branch is a relic of the Cold War that could be improved in light of information gleaned during the coronavirus pandemic that hit Idaho hard in March.

Lawmakers are angry with Republican Gov. Brad Little’s response to the pandemic. He issued a temporary stay-at-home order in late March as patients overwhelmed some hospitals and health care workers became sick. Health care facilities feared running out of protective equipment as the illness spread. The lockdown allowed the situation to stabilize and the state to bring in masks and other equipment.

The bill introduced Thursday in the House is mirrored in the Senate by another bill that advanced Wednesday to a possible public hearing as leadership in the two chambers coordinate efforts to strip an Idaho governor of some powers while increasing their own.

The House bill targets a governor’s authority during natural disasters. The Senate bill targets emergency powers during manmade events, such as a terrorist attack. Both bills have similar language.

About a dozen of pieces of legislation have been introduced to trim a governor’s authority during an emergency since the legislative session started Jan. 11, but most have stalled or been killed as flaws emerged. The bill introduced Thursday follows several failed House bills.

“They say three times is a charm. Let’s hope that’s the case and not three strikes and you’re out,” Monks, the House Assistant Majority Leader, told fellow lawmakers in introducing the bill.

The latest House and Senate bills each allow a governor to declare an emergency and extend it past 60 days, but only to ensure federal funding continues. Both bills would require any restrictions accompanying a governor’s order to expire after 60 days unless renewed by the Legislature. Currently, emergency declarations last 30 days and a governor can simply renew them.

Previous legislation seeking to immediately end Little’s coronavirus emergency came under fire for potentially costing the state $20 million in federal aid. All that legislation appears to have died.

Another notable change in the latest versions of the House and Senate bills defines a governor’s executive orders and proclamations as “rules,” which would then be subject to approval or disapproval of the Legislature through the state’s arcane but important administrative rules process.

That’s a key distinction because lawmakers currently appear to have limited options to end an executive order or health order they don’t think is right. State law says legislators can use a concurrent resolution to end a governor’s emergency order. But an Idaho attorney general’s office opinion, in response to a lawmaker request, said that ability is not found in the Idaho Constitution and therefore doesn’t exist.

That leaves open whether Idaho lawmakers are powerless to do anything when a governor is acting with emergency power authority.

Legislative leaders contest that, and received a different opinion from a private law firm they hired saying concurrent resolutions are valid in ending a governor’s emergency. Still, lawmakers are moving ahead with legislation.

Monks said that some of the earlier legislation suffered from lawmakers looking at them through “COVID glasses.” He said the legislation being worked on now is being done with the idea of handling future emergencies with a different governor and a different set of lawmakers in the Legislature.

“I think we’re going through a very deliberative process to make sure what we’re doing is going to work for all emergencies, not just COVID-related emergencies,” Monks said. “We’ve been trying really hard to make sure that we do that and do it right.”