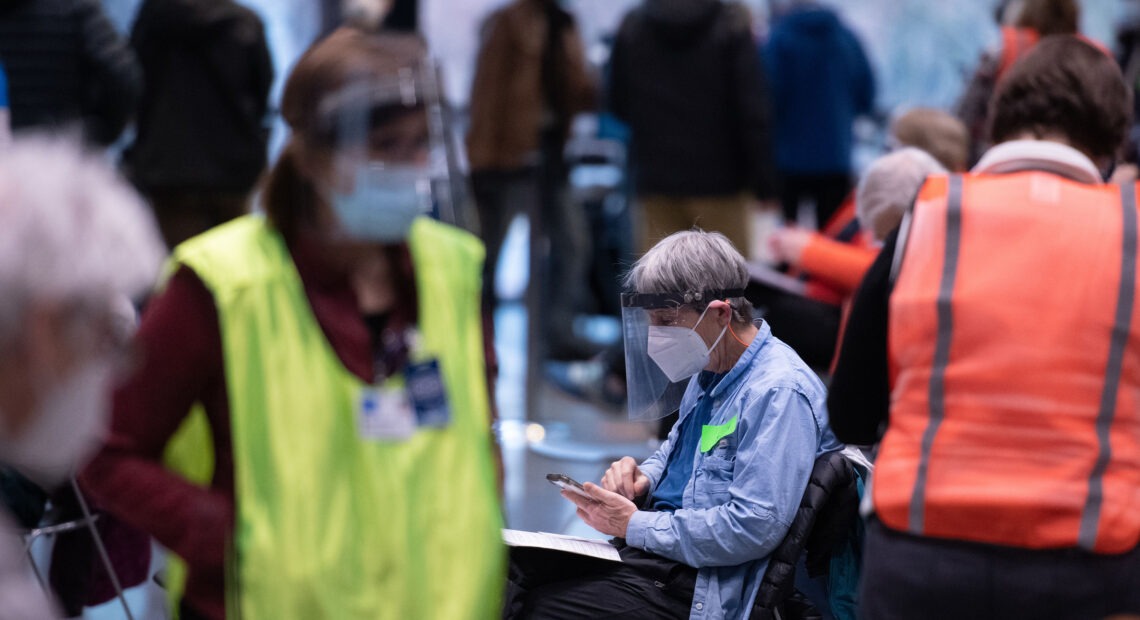 At a recent mass vaccination clinic run by Virginia Mason Health System in Seattle, Steve Baruso, 57, sat in a chair, recovering after getting his shot.

When asked what made him eligible to get the vaccine, he replied that he actually wasn’t.

“I hit the ‘other’ on the form,” he said. That was the option for people who were not currently eligible but wanted to join the waitlist anyway.

“Then I got an email confirmation,” he said. “I don’t know how that happened.”

Baruso wasn’t the only person who somehow managed to jump the line that day; many others told us they didn’t fit into one of the state’s current eligibility categories.

The Washington state department of health told us they aren’t keeping track of who’s eligible and who’s not among those vaccinated, but anecdotal evidence suggests ineligible people are getting vaccines at many clinics across the state. This happens because each provider must come up with its own process for checking eligibility, and most rely on the honor system.

Right now in the state, workers in health care settings, nursing home residents and staff, first responders, people 65 or older, and people 50 or older who live in multi-generational homes are eligible for the vaccine. But, in some cases, younger people, and people who work in professions not yet eligible, have received vaccine appointments.

To be sure, not everyone is cutting the line intentionally. Like Baruso, they may have been confused about why they were offered appointments after checking “other.”

Gale Robinette, a spokesperson for Virginia Mason, said a technical glitch resulted in Baruso and others getting appointments, even though they had told the hospital system they weren’t eligible yet.

Robinette wouldn’t say how many of the thousands of people Virginia Mason has given shots to were affected. He said the problem has been fixed.

Technical issues aren’t the only reason people are getting the vaccine before it’s their turn.

When you sign up for a COVID-19 vaccine in Washington, it’s up to you to tell the truth about your situation. It’s an honor system. 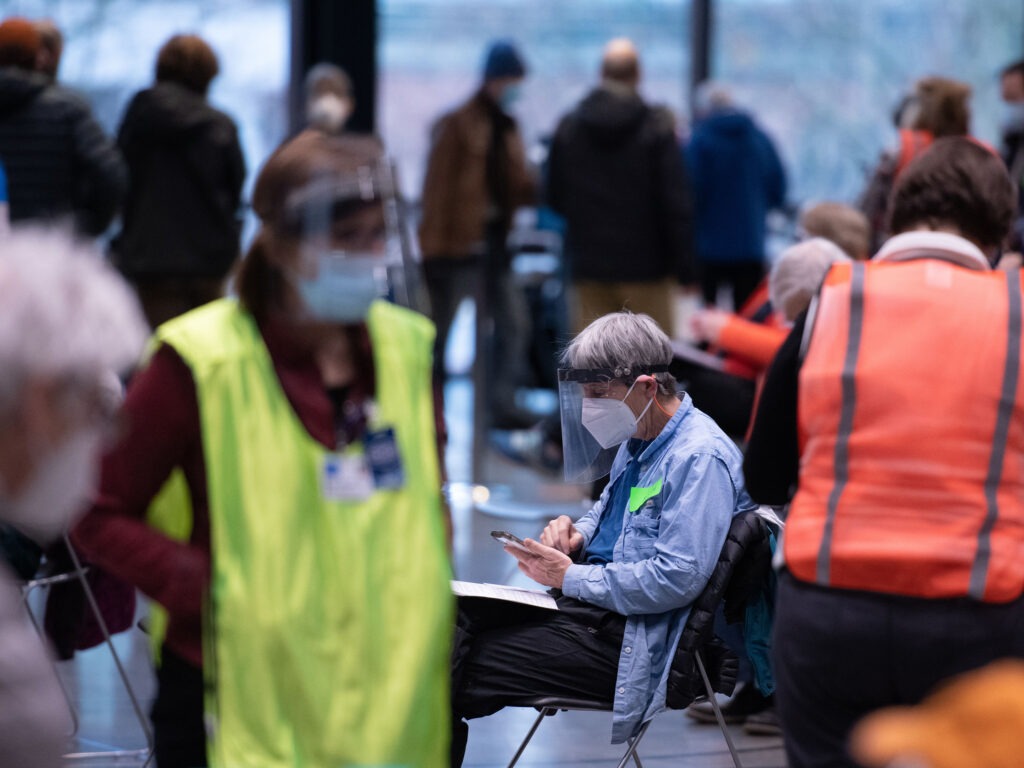 Workers and patients at a pop-up COVID-19 vaccination site near downtown Seattle in January. “The vast majority who are coming in do appear to be meeting the eligibility criteria,” says Dr. Jeff Duchin, King County’s public health officer.
CREDIT: Grant Hindsley/AFP via Getty Images

“I have heard and seen stories from many people who do not meet eligibility criteria, who’ve been vaccinated,” said Dr. Jeff Duchin, King County’s public health officer.

Duchin said Washington state is giving out vaccines on an honor system because it’s too hard to make sure that every single person who gets a vaccine is eligible for one.

“We shouldn’t let the perfect be the enemy of the good here,” he said. “We do want to get as many vaccines out as possible. We know that some people will not be honest; they will be line jumpers, so to speak. But the vast majority who are coming in do appear to be meeting the eligibility criteria.”

“We do everything we can do to communicate to people: Please, schedule only if you’re eligible,” DeBord said. “It would really be difficult for every hospital to take it to the nth level to see if somebody really answered every question honestly. It’s almost impossible.”

The Columbia Basin Hospital in central Washington has a different procedure. They give out about 100 vaccines a week.

Administrator Rosalinda Kibby said that when people come in for their vaccine appointments, they get a few more questions than at Overlake.

“We can look them up usually in several systems to see if they’re eligible or not — but, if they’re not, it’s a very bad conversation,” Kibby said. “They are irate, and difficult for staff to deal with.”

Some states have a more centralized approach. Massachusetts, for example, requires all vaccine providers to collect a form that people have to sign to certify that they’re eligible “under the penalties of perjury.” That form is available in 11 languages on the Massachusetts government’s website.

In some cases, the ambiguity of the categories has led to questions about who may or may not be eligible.

Archbishop of Seattle, Paul Etienne, 61, for example, got his first dose at the Swedish clinic on Seattle University’s campus. At the time, only workers in health care settings and nursing home residents and staff were eligible for the vaccine.

“I’m actually kind of a PR ploy on this one, as the Archbishop, to get my own vaccination and encourage other people to do the same,” he said, “not only for our own health, but for the common good of the broader community.”

Later, the Archdiocese of Seattle said that Etienne received the dose because he anoints the sick in hospitals, and therefore is considered a worker in a health care setting.

Dr. William Moss, at Johns Hopkins University’s School of Public Health, researches how to design vaccination campaigns. He said confusing, unclear eligibility categories are causing problems with the vaccine rollout in Washington state and around the country.

“That was definitely well intentioned when it was thought out,” Moss said. “But people didn’t take the next step, ‘How would we actually pull this off and operationalize this?'”

Without a plan to roll out the vaccines in the intended order, Moss said, “You create confusion, and then you create opportunities for people to cut the line.”

Moss said simple, age-based categories would have been easier to communicate to the public and easier for providers to enforce, and would have accomplished the goal of reducing hospitalizations and deaths.

But because the categories are confusing, it’s easier if you have a computer, so you can walk through the Department of Health website to check your eligibility. That means people with access to technology — and technical know-how — get vaccines first.

“The attempt to have equity created more inequity,” Moss said.

It is still early in the rollout, though, and providers are making adjustments.

In mid-January, all you needed to get into the Virginia Mason clinic was an appointment. Now, says Robinette, the Virginia Mason spokesperson, a photo ID and screenshot or printout of eligibility confirmation from the department of health are required.

Eilis O’Neill has been reporting on the SARS-CoV-2 pandemic for NPR affiliate KUOW, where this story originally appeared. 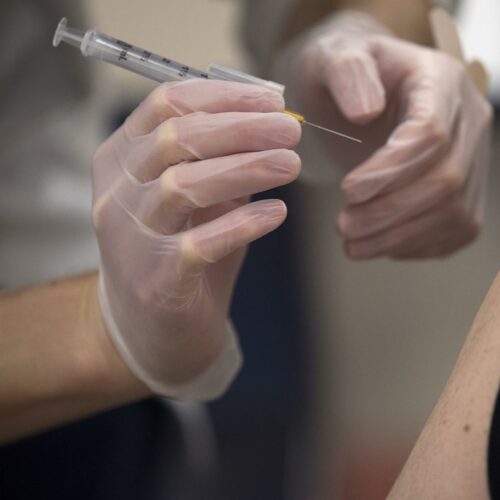