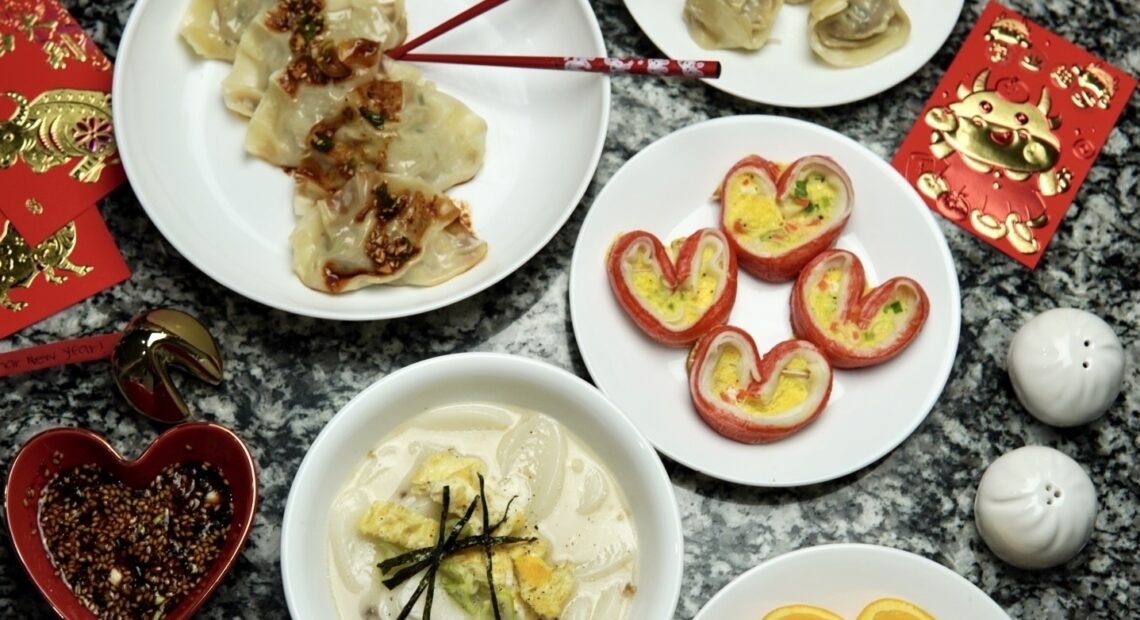 Lunar New Year hits differently this year. It’s an annual holiday celebrated on a bedrock of bringing families, across the country and overseas, together for home-cooked meals and lots of catching up.

Some people may be spending the weekend in the comfort of their family homes, for the first time in years, while other Korean American folks, like me, are scrambling to find comfort food, as a way of feeling connected to their loved ones.

For those celebrating Feb. 12 on their own, I asked some of the greatest creative minds in the kitchen — TikTok chefs — for Lunar New Year recipes. Here are quarantine kitchen hacks from Chris Cho (@chefchrischo), Joanne Molinaro (@thekoreanvegan) and Jessica Woo (@sulheejessica).

A Korean New Year’s Day staple, tteokguk is a hearty soup made of disc-shaped rice cakes in clear broth. The heart of this dish is its white color palate which symbolizes a fresh start to a new year. 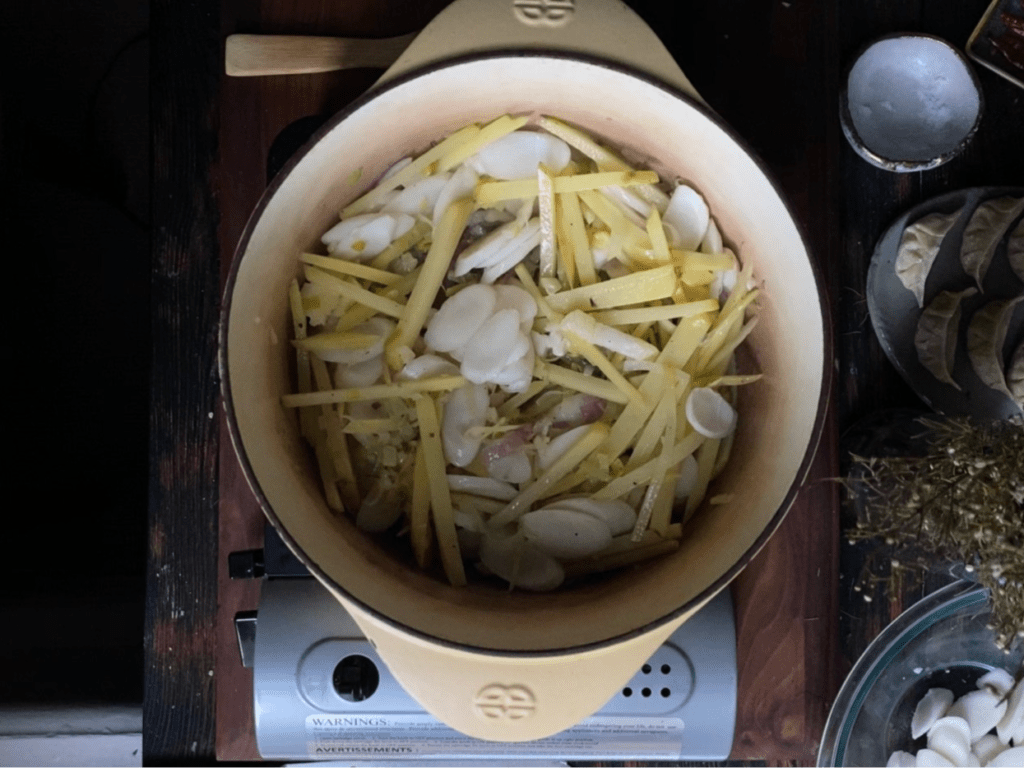 For non-meat eaters, vegan food blogger Molinaro recommends using white cabbage as a base for the soup broth. (Note: Red cabbage shouldn’t be substituted for white cabbage for clear broth.) “The key I learned from my aunt is to throw in white cabbage with the part of vegetables you would normally toss like onion peels and the hard end of a radish,” she says. “Let them sit for hours — and you get that white, wholesome broth.”

Craving a classic bone broth? There’s no shame in taking advantage of prepackaged oxtail soups from your local Korean grocer’s, a quick fix recommended by both Cho and Woo. When the broth is ready and rice cakes cooked, the soup can be served with garnishes of your choice, including eggs, scallions, seaweed and sesame seeds.

Add in dumplings for tteokmandugook

One way to upgrade a simple tteokguk is by adding Korean dumplings known as mandus. Filled with meats, vegetables and/or kimchi, these hearty bites change the soup’s name to tteokmandugook, meaning rice cake and dumpling soup.

Woo, who grew up cooking with her mom and aunts on Lunar New Year, recommends parents get their children involved in the kitchen. Her suggestion is to make mandus from scratch. In addition to following her recipe — from mincing meat, tofu, bean sprouts and eggs to folding the wrap’s edges carefully — she points out that “the inside can’t be watery. You want to make sure you have cheesecloth, or even a paper towel, to squeeze out all that liquid.” 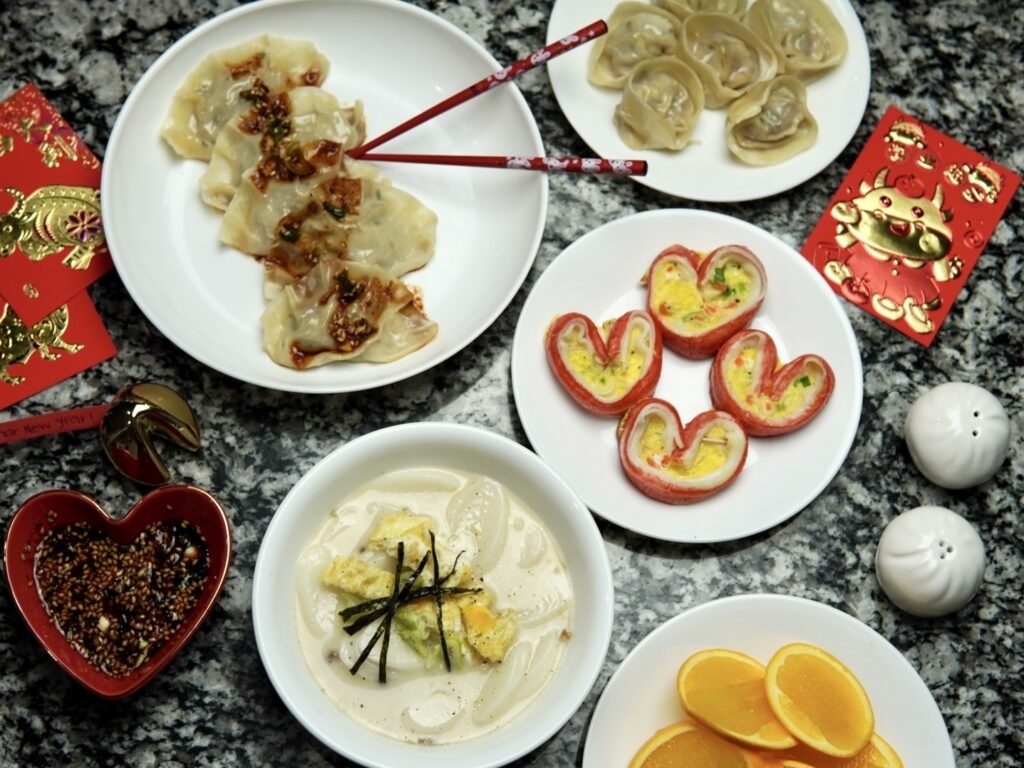 But if any of this sounds too complicated, there’s nothing wrong with store-bought mandus. In fact, premade dumplings are occasionally featured on Woo’s signature bento box lunches.

Finding the right jeon for you

Korean barbeque enthusiasts may be familiar with pajeon, savory pancakes made primarily of wheat and rice flour, eggs and scallions. But besides that and haemul pajeon, made also of seafood, there are lesser known jeons for people with different taste palettes.

On any other Lunar New Year, Molinaro would make rainbow jeon for her parents. Her unique recipe draws inspiration from a Chinese savory fritter made of “colorful, vibrant and textured vegetables” that made her “go grab cabbage, carrots and potatoes from the kitchen. And it just turned out as this beautiful dish,” she recalls. Using batter that’s infused with garlic and onion powders and soy sauce, she adds, makes rainbow jeon the perfect standalone snack. 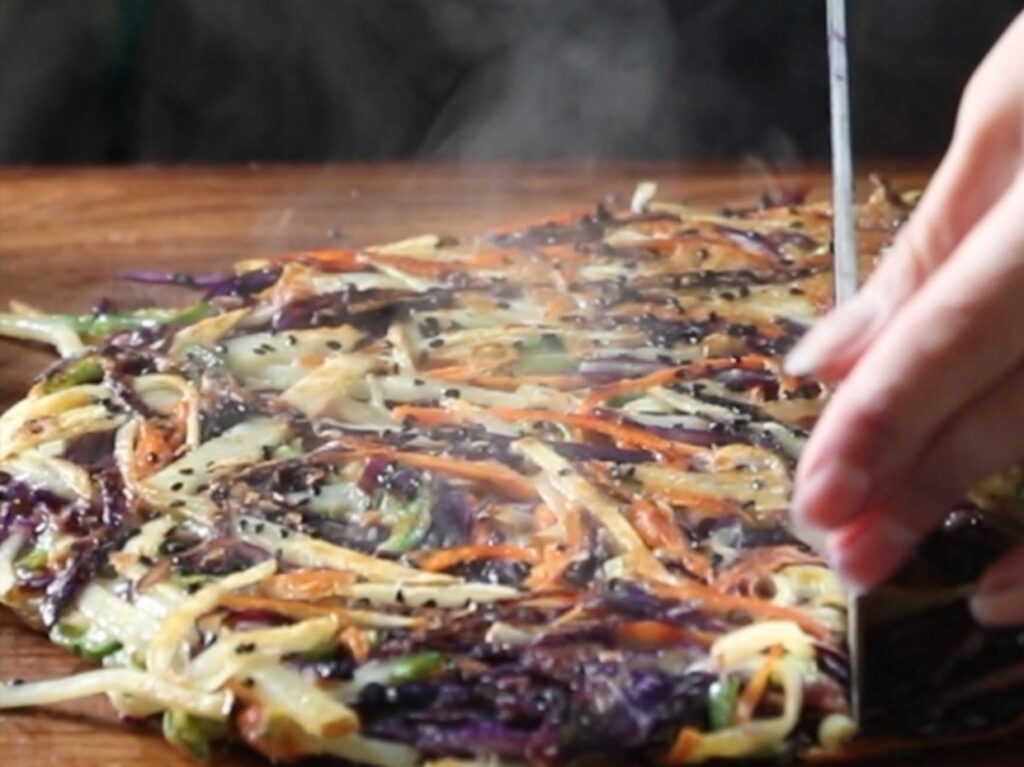 Another trendy jeon among Korean home cooks is made of imitation crab. Woo suggests creating heart shapes with the main ingredient, to make room for eggs. Though this isn’t a traditional recipe, Woo recommends it as an additional side dish for children or as a simpler alternative that doesn’t require mincing ingredients.

There’s no shame in feeling lazy about cooking a well thought-out meal on a holiday. Want to stay away from the stove? Molinaro suggests a pack of microwavable rice (preferably sticky rice from Korean brands), a cup of water in a bowl and some cubed radish kimchi known as kkakdugi. “And if you’re feeling fancy, then add a pack of seaweed — now that’s a quick fix,” she says.

For a snack that’s just as simple but with a twist, try Cho’s Korean-style tortilla. This four-fold gimbap features four ingredients (rice, kimchi, Spam and egg) that are spread on seaweed and layered into a bite-sized wrap. Even though what the Philadelphia-based chef shares on social media “isn’t what I’d make at the restaurant, they are focused on how people at home, stuck in quarantine with no shopping lists can make exciting Korean food,” he says. “It’s like running a virtual restaurant, where I’m serving Korean communities beyond Philly.” 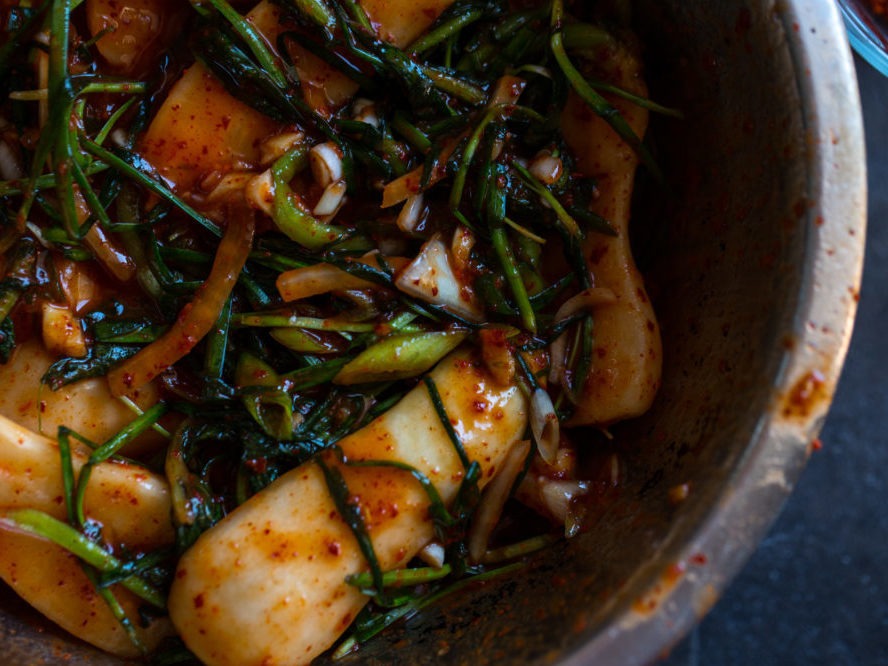