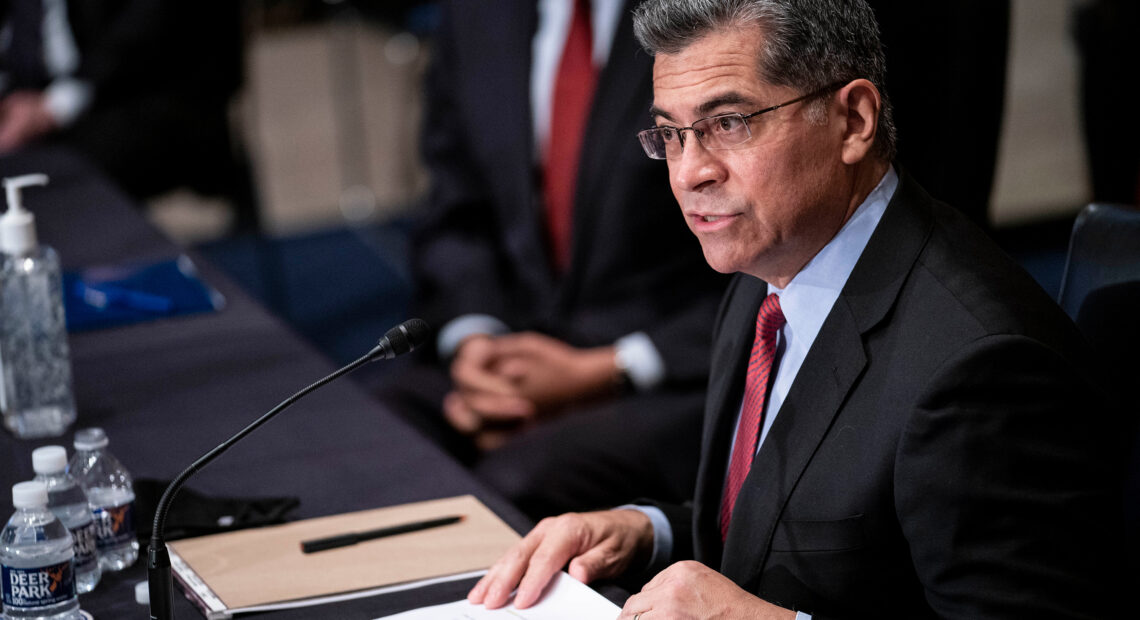 As President Joe Biden works to overhaul U.S. health care policy, few challenges will loom larger for his health secretary than restoring access to family planning while parrying legal challenges to abortion proliferating across the country.

Physicians, clinics and women’s health advocates are looking to Xavier Becerra, Biden’s nominee to run the Department of Health and Human Services, to help swiftly unwind Trump-era funding cuts and rules that have decimated the nation’s network of reproductive health providers over the past four years.

But Becerra’s in the middle of confirmation hearings this week. And though he fought the Trump administration’s family planning restrictions as California’s attorney general, he will, if confirmed by the Senate, face a U.S. Supreme Court dominated by Republican appointees, plus other increasingly conservative federal courts that have backed efforts to restrict reproductive health services.

The leader of Biden’s Health and Human Services team will also have to contend with an energized anti-abortion movement — a movement eager to leverage political power in red state legislatures to finally achieve its decades-long quest to ban abortion outright. 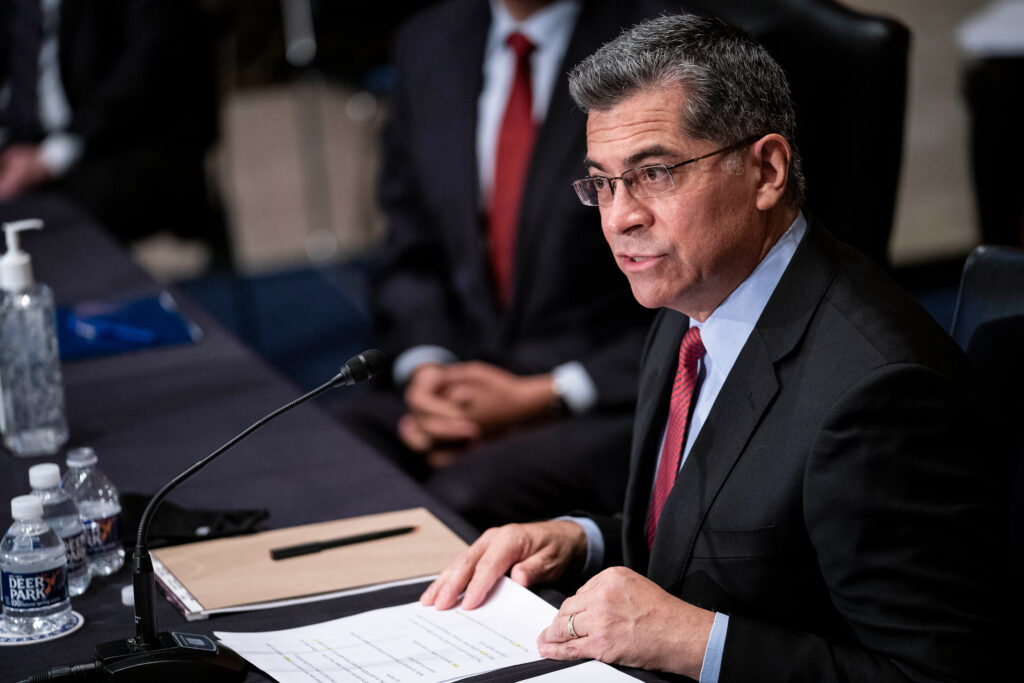 Xavier Becerra, President Biden’s nominee for secretary of the Department of Health and Human Services, contended with critics of abortion rights on the first day of his confirmation hearings Tuesday.
CREDIT: Sarah Silbiger/POOL/AFP via Getty Images

Any Biden administration efforts to preserve the right to an abortion and other family planning services could set up new legal battles between the federal government and states.

“It’s a minefield,” says Mary Ziegler, a law professor at Florida State University who has written extensively about the history of the nation’s abortion debate.

“Expectations on both sides are extremely high,” she says. “And the Supreme Court may force the issue to the top of the agenda if it does something aggressive to restrict abortion.”

The outlines of the brewing showdown came further into focus Tuesday as Becerra faced opposition from a number of Republicans on the Senate health committee on the first of two days of confirmation hearings.

“For many of us, your record has been … very extreme,” Sen. Mike Braun, R-Ind., told Becerra at the hearing, accusing him of being “against pro-life.” More than three dozen groups opposed to abortion rights have urged the Senate to reject Becerra, who has been a longtime advocate for abortion rights and federal support for contraceptives.

By contrast, Becerra has drawn strong support from abortion rights groups, which have applauded his efforts challenging Trump restrictions on family planning services. “He will be a great partner,” says Alexis McGill Johnson, president of the Planned Parenthood Federation of America.

Becerra, whose wife, Dr. Carolina Reyes, is an obstetrician, is scheduled to appear before the Senate Finance Committee on Wednesday, after which his nomination is expected to move to the floor of the Senate next week for consideration by the whole body.

Successive presidential administrations since the 1980s have restricted or expanded federal support for family planning, depending on which party controlled the White House.

But tensions between the two sides intensified under President Donald Trump, making the task before Biden and Becerra that much more delicate.

Trump, who relied heavily on political backing from religious conservatives, moved more aggressively than his GOP predecessors to curtail access to abortion and clamp down on federal funding for clinics that provide reproductive care.

Organizations such as Planned Parenthood that long received federal money through the half-century-old Title X program were forced out of it when the Trump administration effectively barred recipients of federal aid from providing abortions or counseling women about the procedure.

That move, in turn, led to widespread staffing cutbacks at clinics across the country and huge drops in the number of people able to get family planning services, according to health care providers.

“We’re seeing so many fewer clients,” says Brenda Thomas, chief executive of Arizona Family Health Partnership, which coordinates the state’s Title X program. Thomas said the number of patients in Arizona’s program dropped 24% in 2019 after the Trump administration issued the new rules; it then declined an additional 40% in 2020, as the COVID-19 pandemic further hampered services.

In Missouri, a provider operating three family planning clinics left the program, leading to a 14% decrease in patients getting services through Title X, according to the Missouri Family Health Council.

And in California, the Title X restrictions led to a 40% reduction in patients in 2019, says Lisa Matsubara, general counsel at Planned Parenthood Affiliates of California.

Like many other family planning advocates, Matsubara says Biden needs to do more than just reverse the cuts. “We don’t want to just, like, go back to what it was before the Trump administration,” she says. “We’re really looking and hoping that the administration really takes the necessary steps to expand access.”

Biden has pledged to rewrite the family planning regulations so clinics providing reproductive health services can return to the program.

Within days of taking office, Biden issued an executive order to reverse other family planning restrictions imposed by the last administration, including rescinding what’s come to be called the global gag rule that prevented international aid groups that receive U.S. funding from counseling pregnant patients about abortion.

Rolling back some federal policies, like the restrictions on international aid, are relatively simple. Biden and Becerra likely also could quickly reverse Trump-era restrictions on mifepristone, a pill used to induce abortion early in a pregnancy.

But rewriting rules on funding for family planning or reissuing other complex regulations could be considerably more fraught, experts say.

“Both sides have really learned how to maximize use of courts,” says Alina Salganicoff, who directs women’s health policy at the Kaiser Family Foundation, a health policy nonprofit. (Kaiser Health News is an editorially independent program of KFF.)

“If anyone understands the legal challenges, it’s Becerra,” Salganicoff says. “But these are thorny issues. There are questions about how the Biden administration can move forward and how fast. And there’s no question they are going to be sued.”

After taking office, Biden said his administration would review the Title X restrictions, which are also under review by the Supreme Court.

As California attorney general, Becerra sued to stop the Trump administration rules. The case was rejected by lower federal courts, though a separate lawsuit in Maryland challenging the rules was successful, setting up the case for the Supreme Court.

Just last week, South Carolina Gov. Henry McMaster, a Republican, signed a bill barring abortions as soon as a fetal heartbeat can be detected with ultrasound, or about five or six weeks after a pregnancy begins.

The South Carolina law was temporarily blocked by a federal judge after Planned Parenthood filed a lawsuit.

The Supreme Court has never upheld a law as restrictive as South Carolina’s. But the high court is the most conservative it has been in decades, raising the prospect that justices may reconsider the landmark 1973 Roe v. Wade decision, which recognized the right to an abortion.

That could force Biden — and potentially Becerra — to step much more directly into efforts in Congress to safeguard abortion rights, says Ziegler, the Florida law professor.

“There will be huge pressure on the Biden administration to do big, bold things,” Ziegler says.

KHN (Kaiser Health News) is a nonprofit news service covering health issues. It is an editorially independent program of KFF (Kaiser Family Foundation) that is not affiliated with Kaiser Permanente.