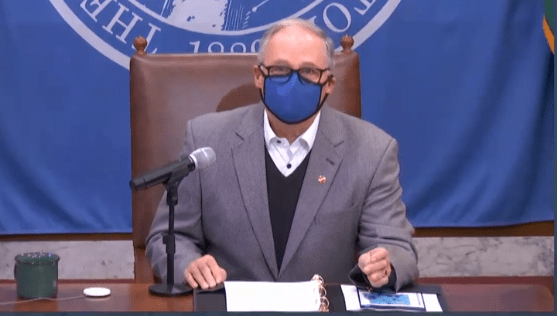 Washington Gov. Jay Inslee said none of the state’s regions will revert back to more restrictive COVID-19 requirements under the state’s economic reopening plan under a pause in potential rollbacks the Democratic governor announced Thursday amid dropping case counts.

“We’ve made incredible progress in knocking down the infection rate in covid over the last several weeks,” Inslee said at a news conference announcing the pause.

A spokesman said that none of the eight regions were at risk of moving backward this week if the pause wasn’t implemented.

While all 39 counties are currently in the second phase of the plan — which includes limited indoor dining at restaurants — the governor has yet to provide information about what subsequent phases might look like.

Gov. Jay Inslee has recently found himself on the defensive in the face of criticism, even from some Democrats, over his approach to reopening regions of the state. CREDIT: TVW

Inslee said that in order to craft what future phases will look like, he would spend the next several weeks talking with businesses, health officials and others, as well as looking at the status of the virus, including variants that have been detected in the state and progress in the state’s vaccination efforts.

“We need information to be able to do that in an effective way,” he said. “We want to give people the truth, we want to give people as much predictability as we can provide them, we know how important that is to businesses and everyone else. But it would not serve their purpose to give them a plan that later didn’t come to pass.”

Last month, Inslee announced that regions had to meet three of four metrics in order to advance and to stay in Phase 2: a 10% decreasing trend in case rates over a two-week period; a 10% decrease in coronavirus hospital admission rates in that same timeframe; an ICU occupancy rate that’s less than 90%; and a test positivity rate of less than 10%.

The most updated information from the Department of Health shows that half of the regions were meeting all four metrics, with the other half meeting three out of four.

In the second phase, restaurants can offer indoor dining at 25% capacity, and indoor fitness center can open with the same limit. Sports competitions can resume with limited spectators, and wedding and funeral ceremonies can increase their number of guests.

Kris Johnson, president of the Association of Washington Business, said he was disappointed that the governor did not announce additional guidance on later phases.

“Unfortunately, it appears we have reached a stop sign on the road to recovery,” he said in a statement. “Washington employers need to see the roadmap for how we reopen the state’s economy and begin to rebuild.”

For most, the coronavirus causes mild or moderate symptoms, such as fever and cough that clear up in two to three weeks, although long-term effects are unknown. But for some, it can cause more severe illness, including pneumonia and death.