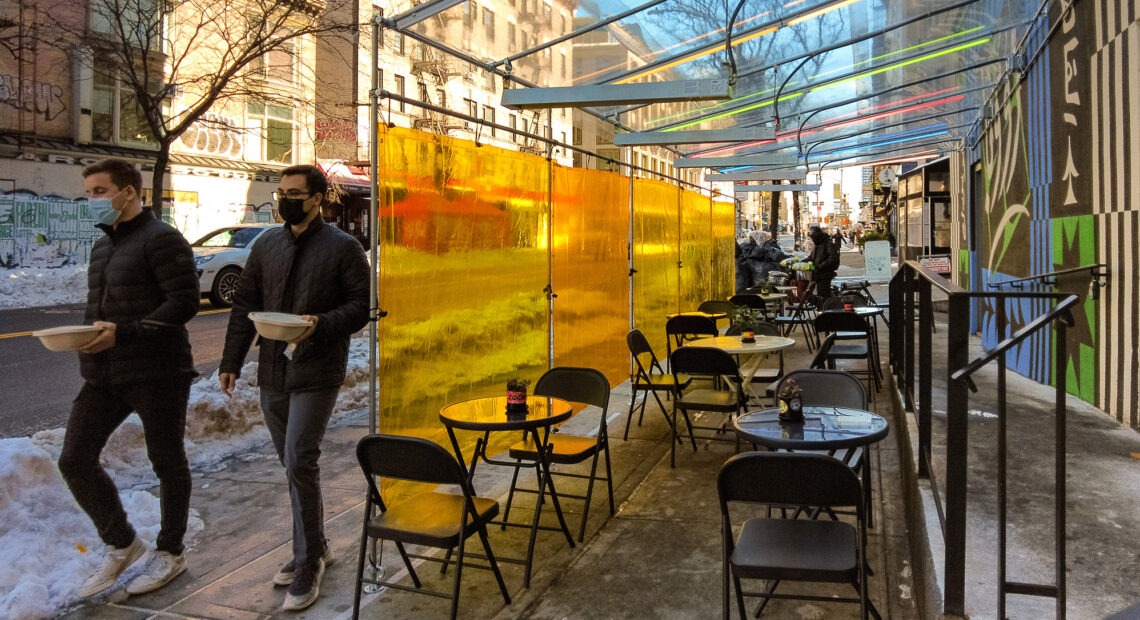 U.S. Coronavirus Cases Dropped Dramatically Since January, But Can We Keep Them Down?

With coronavirus infections on a steady, six weeks long descent in the U.S., it’s clear the worst days of the brutal winter surge have waned. Yet researchers are still not sure how sustainable the decline is. And a small but concerning uptick in cases in the last three days has health officials on edge.

So what caused the massive decline since January, and what can the U.S. do to ensure that it lasts?

New infections have fallen close to 70% nationwide in just over six weeks, bringing the average number of cases to levels last seen in early fall.

The number of people hospitalized for COVID-19 has plummeted by nearly 60% since the peak in January. The rate of tests coming back positive in the U.S. is far below what it was during the January peak, down from over 13% to now less than 5%.

And the trend holds true nearly everywhere. “It’s hard to find a county that has me concerned, and that’s pretty striking,” says Dr. David Rubin who directs PolicyLab at the Children’s Hospital of Philadelphia, which models COVID-19 outbreaks using localized data.

The near universal drop-off is distinct from earlier waves in the pandemic, when cases tended to rise and fall in different regions of the country, one preceding the next.

“The seeds of risk, they’re not hard to spot and won’t just appear all of a sudden,” Rubin says. “What’s optimistic is you don’t see that — you see everywhere declining.”

The speed of the turnaround is also a good indicator that Americans are willing to do what it takes to keep infections from spreading, says Natalie Dean, an assistant professor of biostatistics at the University of Florida. “When you see rapid changes, you have to think about what can change quickly and human behavior is something that can.”

Dean says that growing pockets of immunity from high levels of infection and vaccines are also increasingly helping.

But with more contagious new variants on the way, the nation’s top health officials are worried the decline may not be sustainable.

Rubin says heading into the spring there are multiple forces that could counteract the lurking danger of variants — better diligence about pandemic precautions, warmer temperatures and growing immunity from both infections and vaccinations.

“There’s some optimism that if we can continue on the current path of the things we’ve learned to do well to protect each other and our families, that will lead to hopefully a way out of this pandemic,” he says. 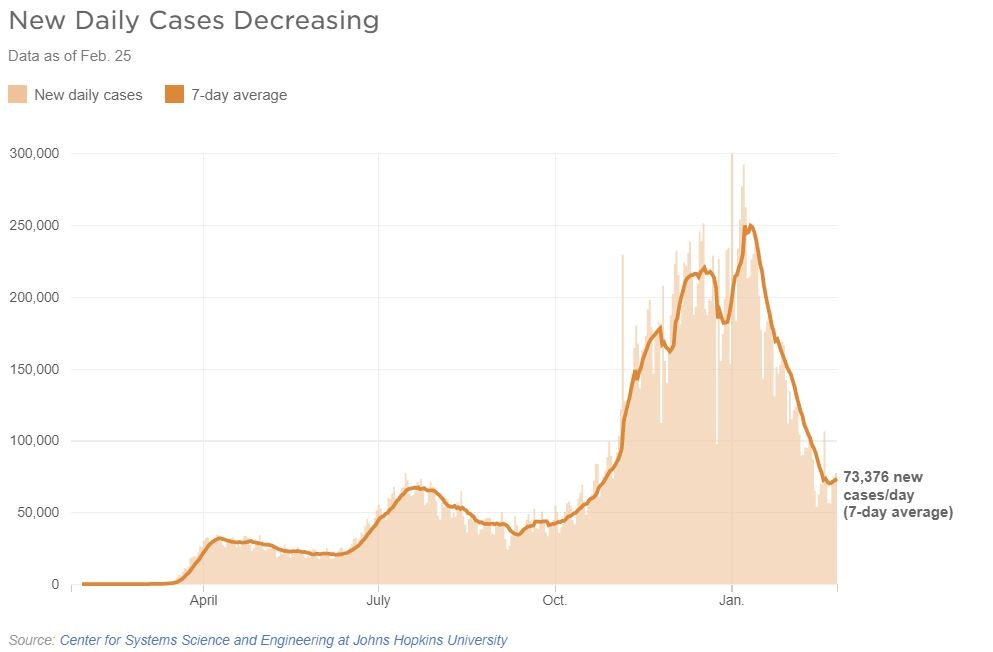 It was no surprise that the colder months ushered in a steep rise of coronavirus infections as people spent more time indoors and the holiday season increased travel and family gatherings.

Some parts of the U.S. did clearly have major spikes in the wake of holidays, but overall the “surge upon a surge,” which Dr. Anthony Fauci warned could transpire this winter, was not as bad as some of the leading disease modelers expected.

“It didn’t materialize simply because Americans changed their behavior,” says Ali Mokdad at the Institute of Health Metrics and Evaluation at the University of Washington.

News of overwhelmed hospitals and constant reminders about the dangers of holiday gatherings resonated with Americans, he says.

The data that Mokdad’s modeling team tracks — such as mobility, cell phone activity and adherence to wearing face masks — show that people cut down on travel and were less socially active around the holidays.

“People really took the warnings to heart and even those who did travel, after the holidays, they stayed put,” says Mokdad, who points out that even cell phone calls fell significantly in the wake of Thanksgiving.

An ongoing national survey of more than 25,000 people in the U.S. found that social distancing has generally improved in recent months, with “indoor proximity between groups of five or more people peaking in late October” as the surge was picking up nationwide.

It also found about 30% of respondents attended or were planning to attend a holiday gathering in December (compared to just 15% in November).

Shah says it’s still too early for vaccinations to have a major impact on cases, although that will play more of a role in the coming months.

“This decline now is entirely due to things that we have within our control.”

Seasonality may keep the decline going

The mid-January peak in cases followed by the current decline also tracks with the seasonal forces that epidemiologists know well from other viruses.

“We’re not out of the woods yet, but we’re seeing a natural curve here over winter that reflects the seasonality of this virus,” says Rubin of Children’s Hospital of Philadelphia. 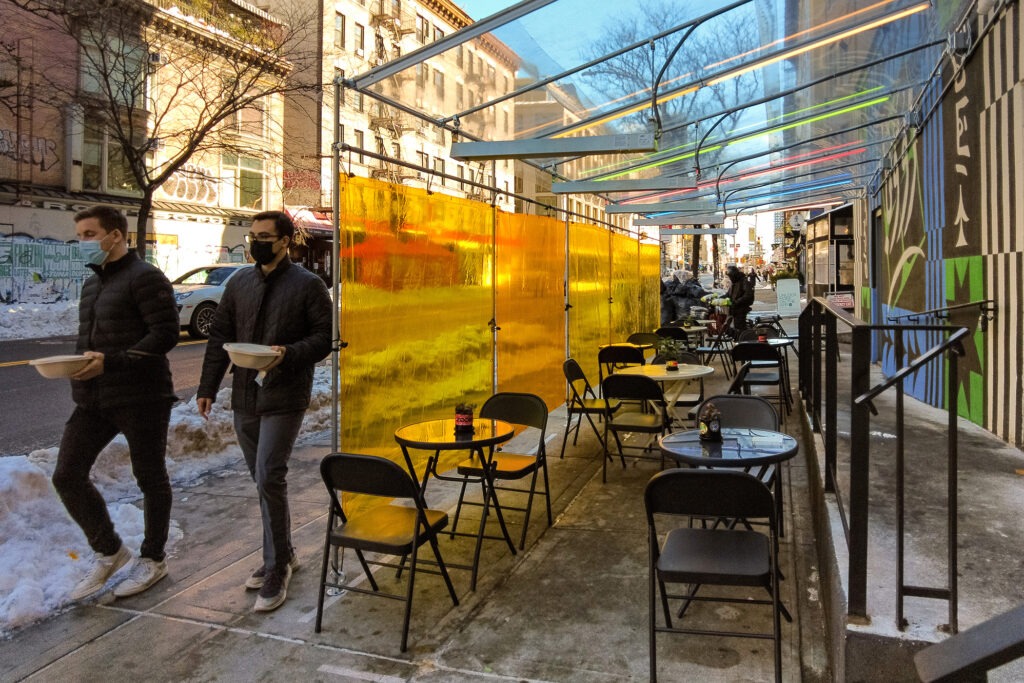 Restrictions on public gatherings and indoor dining, as well as improved rates of mask-wearing and social distancing helped bring down the rate of new coronavirus infections in the U.S.
CREDIT: Dia Dipasupil/Getty Images

Rubin says it appears many places have generated “momentum toward declining cases well into spring.” A host of factors — longer days, warming temperature in some parts of the U.S., the lack of large gathering holidays in the near future, and accumulating natural and acquired immunity from vaccination — will overwhelm any risk from more transmissible variants, he says.

In parts of the U.S., immunity — driven by previously high rates of infections — could be a significant factor, says Bill Hanage, a professor at the Harvard T.H. Chan School of Public Health.

In South Dakota, over 111,000 people have tested positive for the virus since the beginning of the pandemic — that’s more than 12% of the population, and the actual number of people who’ve been infected could be closer to 41% in that state, according to one recent estimate. Modelers estimate more than third of the U.S population overall may already have been infected.

But Hanage says seasonal changes in temperature and higher immunity cannot fully explain why cases are falling at roughly the same speed in every region.

“Everywhere has its own pandemic story,” says Hanage “But if you ask me what’s more likely, I’d say it’s probably the human mixing component because the weather is still pretty bad in large parts of the country.”

New daily infections have dropped about by 82% on average over the last six weeks in the West, around 73% in the Midwest, 68% in the South and 61% in the Northeast, according to NPR’s analysis of Johns Hopkins coronavirus data.

Despite the progress in slowing infections, public health researchers still see risky days before us. A familiar pattern throughout the pandemic is that mask wearing and social distancing improve when the situation gets most dire, only to fall off again when news improves, warns Ali Mokdad of IHME.

“We are always on this rollercoaster,” he says. “The question is — will Americans behave the same way as the cases are coming down because they behaved well when the cases were going up?”

Mask wearing remains above 75% nationwide in February, but mobility is already gradually trending upwards, according to IHME’s latest analysis.

And cases remain much higher than they were during the summer peak, as do hospitalizations for COVID-19.

According to IHME’s modeling, the most likely scenario is that infections will continue to steadily trend down, dropping to around 35,000 new daily infections by May. IHME’s more pessimistic prediction is that the coronavirus variants spread rapidly and a new wave of infections picks up in March, leading to a new, small peak of about 126,000 new daily cases by April.

“Even though the numbers have been decreasing, there are several things that could very quickly send the cases soaring again,” says Shah at Emory. “This is not the time to get complacent.”

Some states are already doing away with face mask mandates and limits on indoor gatherings.

It could be a perilous move as new, more contagious variants of the virus emerge in dozens of states, foreshadowing what could be a breakneck rebound in cases as was seen in European countries like the U.K. and Denmark.

“We thought we were up against a constant foe,” says the University of Florida’s Natalie Dean. “It will depend upon which variants we see spreading the most. I really don’t think about them as equal, and we may take a bigger hit with certain types.”

The variant first identified in the U.K. — what Dr. Anthony Fauci predicts will be the dominant form of the coronavirus by late March — can be handled with the Pfizer and Moderna vaccines, according to available data.

Other strains initially identified in South Africa and Brazil have drugmakers and the federal government hurriedly researching how to alter the available vaccines to keep up with mutations that could render them less effective.

“These new variants seem to be possibly 20% to 30% more transmissible,” says Shah. “When you multiply that over several cycles of transmission, it can lead to exponential increase in the number of cases very quickly.”