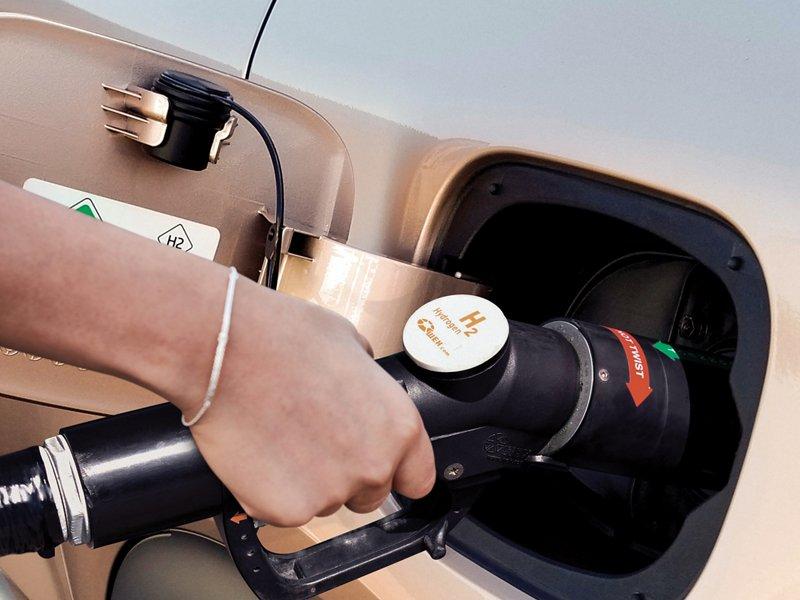 A public utility in north-central Washington broke ground Monday for a hydrogen production facility. It’s one of several related actions in the Pacific Northwest that reflect renewed interest in hydrogen as a clean alternative fuel.

The Douglas County Public Utility District is spending around $20 million to build its renewable hydrogen production plant on the east bank of the Columbia River north of Wenatchee. The main feature of the plant will be an electrolyzer, which uses unsold electricity from the PUD’s dam on the river to split water molecules into oxygen and hydrogen.

“We are building this as a pilot in hopes that if it takes off we will continue to produce even more hydrogen in the future,” said Douglas PUD general manager Gary Ivory as the utility’s three member board stood at the ready behind him with their ceremonial groundbreaking shovels in a former orchard field.

Ivory said the East Wenatchee-based utility anticipates demand for “green” or “renewable hydrogen.” Most hydrogen produced for fuel and industrial uses today is extracted from natural gas. That refining process yields significant amounts of greenhouse gases as a byproduct. Renewable hydrogen by contrast is produced with zero carbon emissions by splitting water using solar, wind energy or hydroelectricity — as in the case of Douglas PUD’s project.

The PUD said it hopes to begin hydrogen production at its new 5 megawatt facility by late this year. One of its first customers is expected to be the Pacific Northwest’s first public hydrogen refueling station, now in the planning stages for construction in the Centralia, Washington area.

In a separate but related action, the Washington State Senate last week voted 49-0 to give a sales tax break to buyers of hydrogen-fueled vehicles. The measure now moves to the state House for further consideration.

“This bill aims to provide tax parity for hydrogen fuel cell electric vehicles that is similar to what the state has long provided to battery electric vehicles,” said the prime sponsor, state Sen. Brad Hawkins (R-East Wenatchee), in a floor speech. “I personally support them both, but I think it is important in our state’s effort to reduce greenhouse gas emissions in the transportation sector that we be technology neutral when it comes to incentive policy.”

Hydrogen has benefited from a surge of renewed interest in the last year as a potentially superior alternative to electric batteries to power heavy trucks, airliners and seagoing vessels in a low-emissions future. Compressed gas or liquid hydrogen fuel provides greater range and decreased weight compared to batteries in these applications.

In any case, when hydrogen is consumed in a fuel cell or engine, it doesn’t emit any carbon pollution. The only thing that comes out of the exhaust is water vapor. 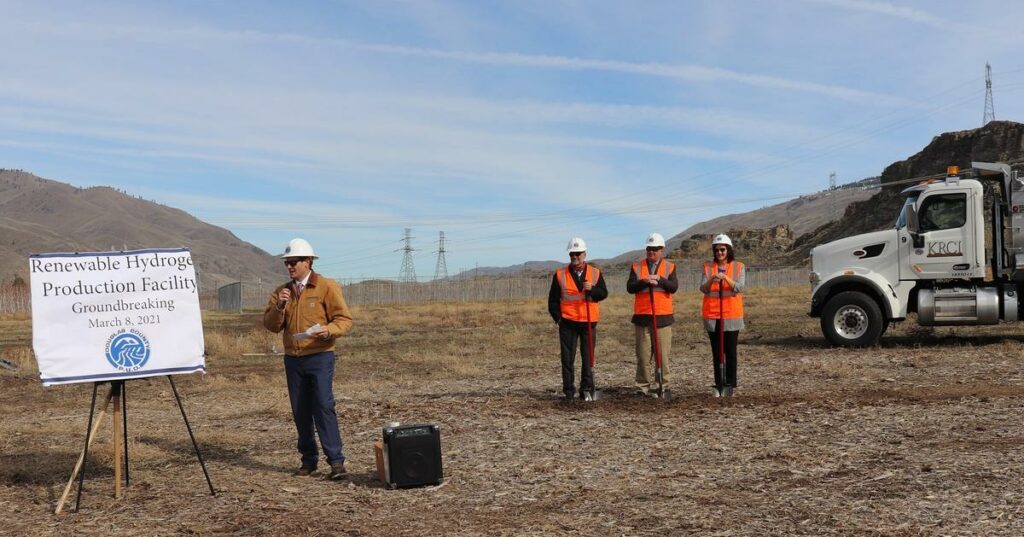 Skepticism about a nascent hydrogen economy remains widespread among energy analysts and in the investment community. As the Wall Street Journal noted in recycling an old putdown last month, “It’s the fuel of the future, and probably always will be.”

Writing on the electric vehicle news site InsideEVs, correspondent Mark Kane analyzed the very low volume of hydrogen fuel cell car sales in the U.S., including a more than 50% sales drop in 2020.

“Governments and some manufacturers can push the volume up in the following years, mostly through generous incentives, but we generally don’t see the future of hydrogen fuel cell cars,” Kane wrote. “At this point, battery-electric cars won the race.”

Three major automakers companies currently sell hydrogen fuel cell sedans in the U.S.: Toyota, Hyundai and Honda. The listed base price of the Toyota Mirai at $50,000 is roughly double the cost of similar-sized, gasoline-powered Toyota Camry.

In the U.S. market, the automakers deliver their hydrogen-powered models solely to a limited number of dealerships in California in proximity to hydrogen fueling stations.

More than 15 years ago, the California and British Columbia governments sketched bold plans for a West Coast “hydrogen highway” for clean cars stretching from Whistler, B.C., to the Mexican border. Vancouver city officials pictured travelers to the 2010 Winter Olympics leaving only water vapor exhaust in their wake. Reality fell far short of the hype.

Oregon and Washington never really warmed to the expensive idea, leaving Vancouver, B.C., as essentially an island with a handful of stations. California has slowly added retail hydrogen refueling stations with 45 statewide as of the last count.

Years later, the U.S. Northwest looks to get its first hydrogen fueling station courtesy of a somewhat unlikely benefactor, the owner of a coal-fired power plant in Centralia whose days are numbered. TransAlta, through its Centralia Coal Transition Board, awarded $1.9 million to the Bonneville Environmental Foundation last fall to build a demonstration fueling station somewhere near Interstate 5 in Lewis County or the vicinity.

Douglas PUD consultant Dave Warren said the hydrogen for the fueling station will come from the utility’s new north-central Washington production plant. He said Toyota will supply 10 used Mirais that can be loaned out to companies and government agencies in the Northwest so they can “kick the tires,” in a manner of speaking. The partners are aiming to open to the public late this year.

Another Northwest utility seriously exploring hydrogen production is Eugene Water and Electric Board, but its plans are still only on paper.

“We, like other utilities, have surplus energy at different times of the year,” said Mike McCann, EWEB electric generation manager, during a January webinar.

He said the Oregon utility is studying the feasibility of making hydrogen and then storing it to turn back into electricity when it is more valuable later. EWEB is also talking with the natural gas utility NW Natural about selling them hydrogen to blend into the gas sold to customers. NW Natural is still investigating what amount it can safely accept into its system.

“If we work together to take EWEB’s excess electricity and use an electrolyzer to produce green hydrogen, we could then put the hydrogen directly into the natural gas pipeline and help them decarbonize their system,” McCann explained.

Tacoma Power is another Northwest utility open to deploying its hydropower reserves to make green hydrogen, but it wants private investors to front the money to install the production equipment. The city-owned utility took the route of publishing a new, lower cost rate specifically for industrial hydrogen production and is inviting companies to move into its service territory to take advantage.

Tacoma Power’s new “electrofuel” rate will go into effect April 1. Utility trade journals and the utility’s superintendent said Tacoma is the first in the nation to offer such a targeted electric rate.

Besides possible uses of hydrogen as a vehicle fuel and to augment natural gas, Douglas PUD’s Ivory has said the product has a market in industrial processes such as oil refining, fertilizer production and electronics manufacturing. 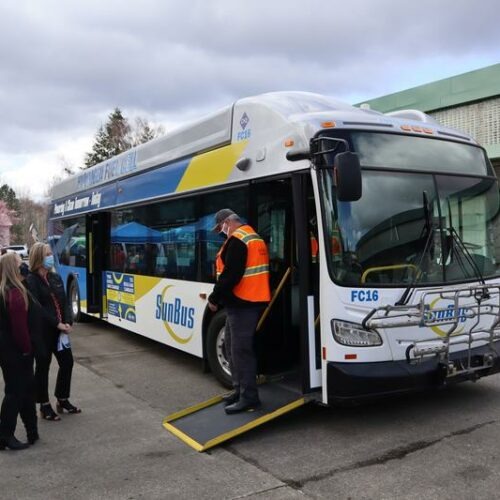 More folks from Northwest government and industry are jumping on the hydrogen bandwagon to test if the alternative fuel could be a viable and green replacement for diesel and gasoline in some situations. The potential converts include more than half a dozen transit agencies from Everett to Eugene, state legislators and Boeing’s drone subsidiary in the Columbia River Gorge. Continue Reading Interest In Hydrogen Fuel Grows Across The Northwest – And Tax Dollars Follow 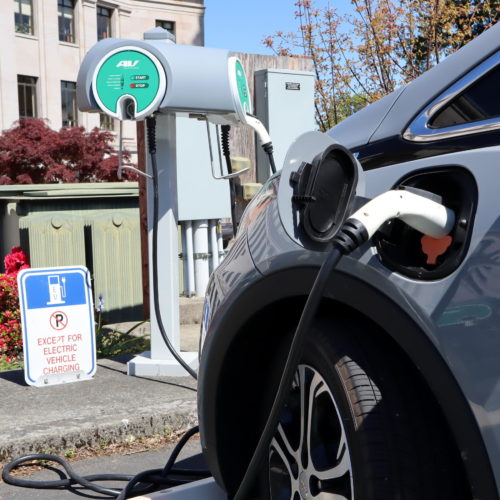 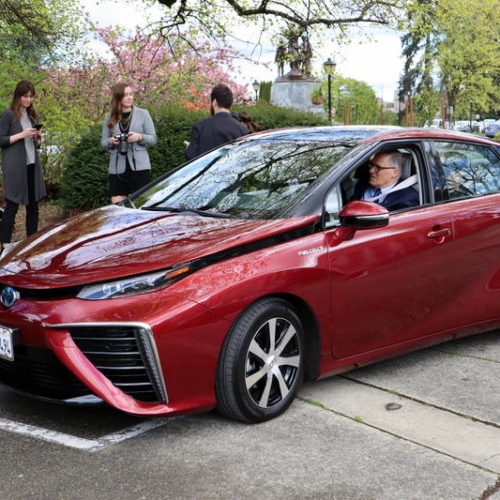