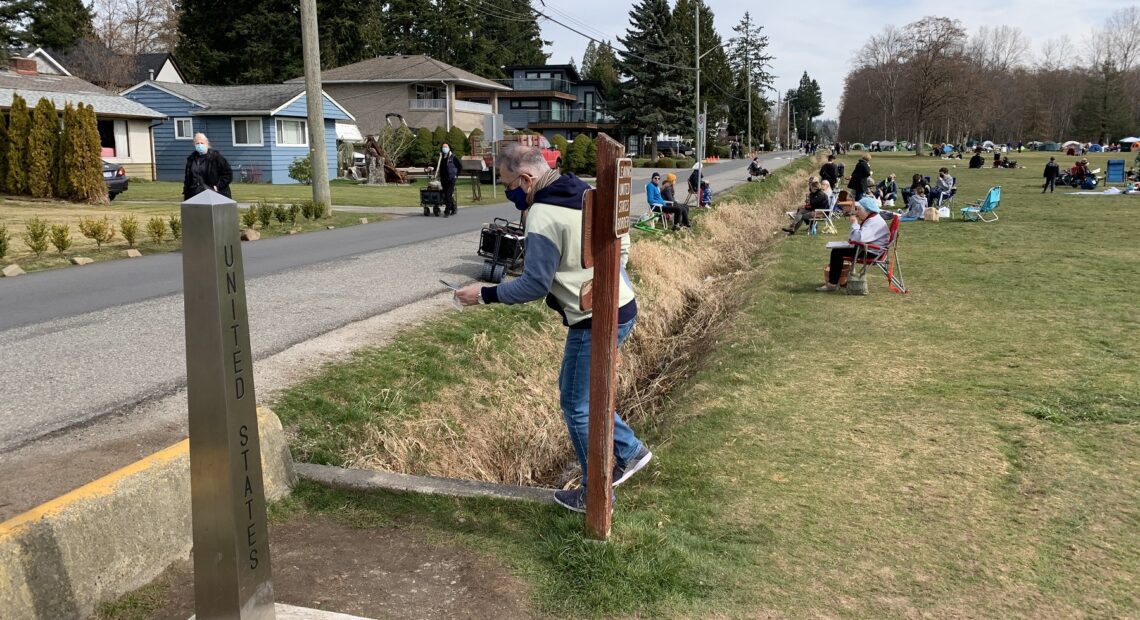 This coming Sunday, March 21, will mark one year since the U.S. and Canada closed their shared border to nonessential crossings due to the pandemic. It’s anybody’s guess when the border might reopen for discretionary trips. In the meantime, every weekend rain or shine, Peace Arch State Park in Blaine, Washington, becomes a happening meetup point for couples and families separated by the northern border.

Before the pandemic, it would be typical in late winter to encounter around 50 people visiting the state park and adjoining provincial park on a weekend afternoon. Last weekend, well more than a thousand people of all ages and races, speaking a Babel of languages, spread out across the manicured lawns on the American side of the cross-border park.

Few showed interest in the park’s namesake 100-year-old gleaming white arch whose inscription rings a bit hollow now. “Children of a common mother,” it reads up high on the arch under the two countries’ flags. At eye level below is the phrase, “May these gates never close.”

Three generations of the Wilson family came prepared for a full day in the border park on Saturday, bringing with them a portable fire pit, camping chairs, blankets, a picnic and story books.

Family patriarch Jack Wilson of Nanaimo, Vancouver Island, said his descendants live on both sides of the border, including a new baby granddaughter from Chehalis, Washington. 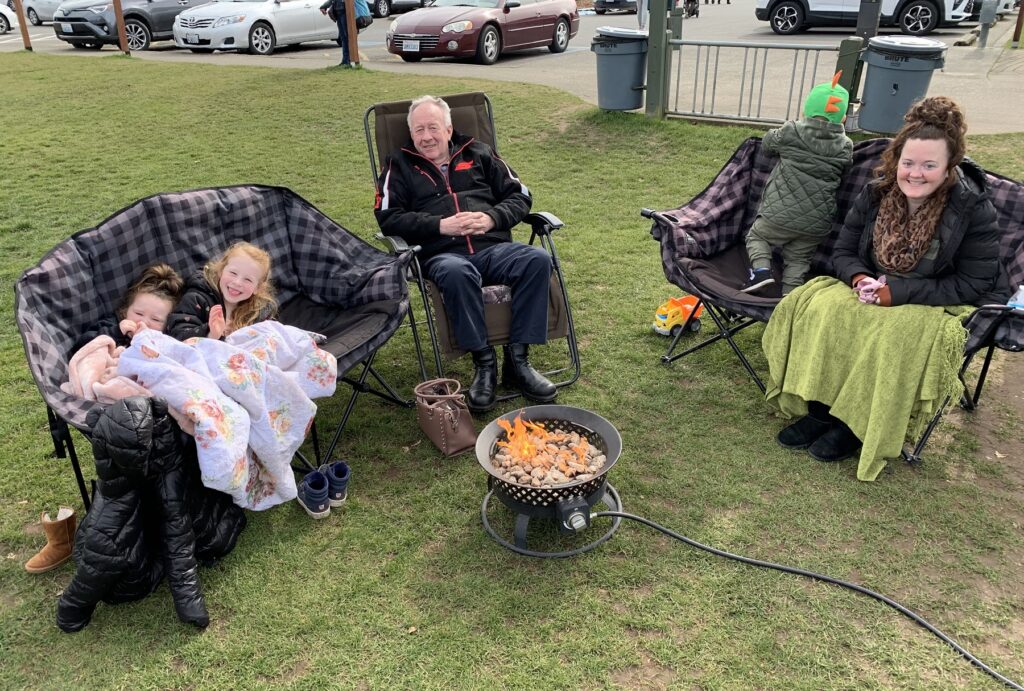 Canadian grandpa Jack Wilson, center, had not seen his American grandchildren including Zoe, second from left, for more than a year until the extended family gathered at the U.S.-Canada border. CREDIT: Tom Banse/N3

“First time I’ve seen that little girl in our life,” said Wilson, beaming from cheek to check. “It means a lot to us just to get together. It’s been a long time since we’ve been together as a family. It’s been well over a year now.”

“It was so fun. I got to see my family and my little cousin and everyone!” chimed in 6-year-old Zoe, who was part of the American contingent of Wilsons.

Her Canadian grandfather Jack said he was grateful a kind of neutral zone exists between the two countries.

“We’ve been saying all along we could always fly down and see them,” but never did, the elder Wilson said.

He said “the time factor” was a barrier because of COVID-era requirements to quarantine on both ends of the trip.

“Since I run my own business, it was just out of reach,” he said.

Canadians returning from foreign trips are subject to a strict two week quarantine nowadays. The Peace Arch Park meetups exist within an unwritten loophole. There’s no wall on the border there, not even a fence. Canadians can get together with their American loved ones on the 19-acre U.S. side of the day-use park by stepping across a drainage ditch.

U.S. Border Patrol and Canadian police officers keep watch to make sure people leave the park the way they came in.

“It’s not neutral (ground) at all. It’s super clear the border is by this ditch,” said Canadian border guard Phil Toews in an interview in the slippery, shallow ditch. “It’s a bit of a loophole for people to be able to come back and forth, but all the rules still apply. For Canadians, you can’t bring goods back. You have to have all your proper documentation, that sort of thing.” 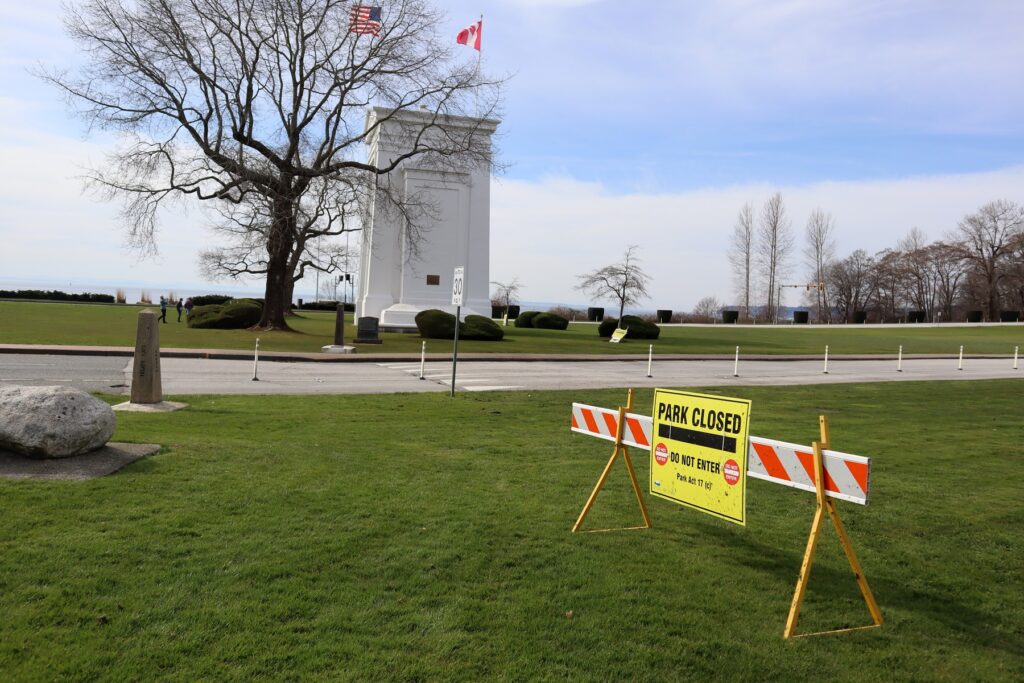 The British Columbia side of Peace Arch Park remains closed, but Canadians can still access the U.S. side from an adjacent city street. CREDIT: Tom Banse/N3

British Columbia legislators who represent the border towns of Surrey and White Rock actually want Washington state to close its side of Peace Arch park until nonessential cross-border travel is deemed safe again. Canada shut down its half of the park last summer because of the crowds and coronavirus transmission concerns.

“At a time when possible COVID-19 variants could spread rapidly, it is critical that your government take swift action and do everything in its power to ensure safety in our communities,” wrote British Columbia Legislative Assembly members Trevor Halford and Stephanie Cadieux in a letter. “Residents shouldn’t be afraid to walk out their front door because others are exploiting a loophole.”

Washington State Park Ranger Rick Blank said if people follow the rules by keeping their distance from other visitors and keeping gatherings small, the state park can stay open safely.

During an interview amid the convivial, scattered throng, Blank noted that people converge on this place from throughout Canada and the United States.

“I’ve had people drive from Montana, Texas, Arizona,” Blank said. “I mean, all over.”

Not even mud and winter cold deters them. On snowy Valentine’s weekend, Blank counted 78 tents that couples and families pitched during the day for shelter and privacy.

“My leadership and above me all thought, ‘Oh, it is going to stop when it rains and gets cold and stuff like that,'” Blank recalled. “I said, ‘No, people’s connections are more important than a border.’ This is not going to stop.”

Mill Creek, Washington, resident Will Shin said he drives to the border park on an almost weekly basis to see his Canadian fiancée, who comes down from Vancouver. Shin is hopeful the border will reopen when more people get vaccinated against COVID. 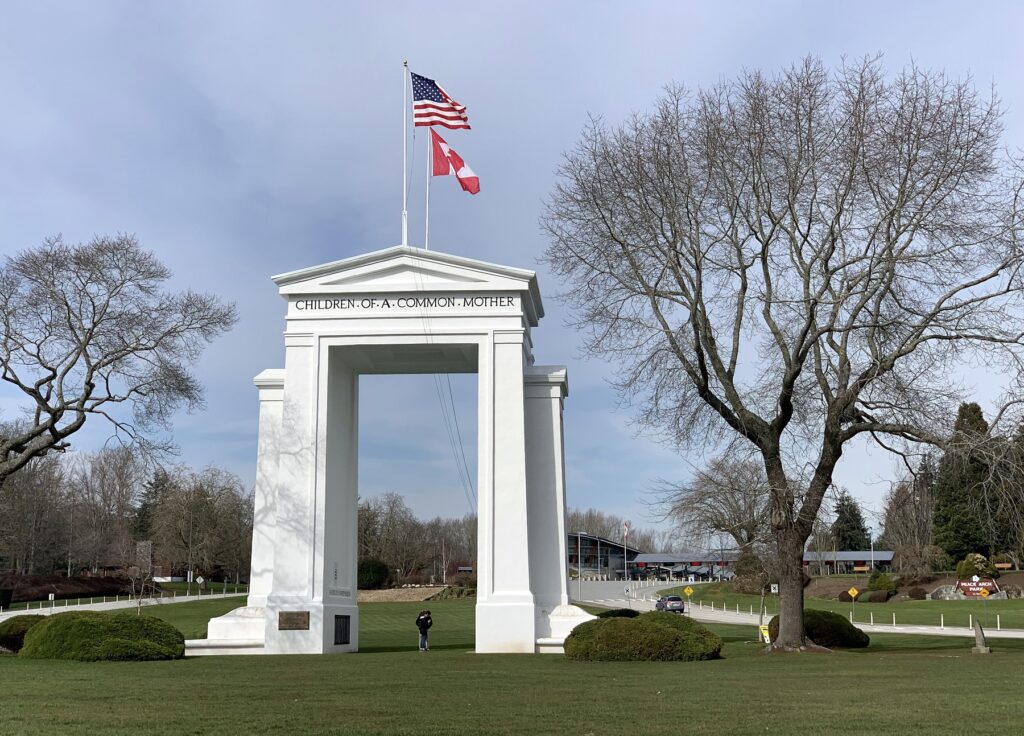 The Peace Arch will celebrate its centennial later this year, but the monument is not why people are flocking to the surrounding park this winter. CREDIT: Tom Banse/N3

“Until now it was a little unclear how we were going to get out of it,” Shin said. “But like now with the vaccine, I think there is light. There is light kind of off in the distance. How we’re going to get there remains to be determined.”

Ottawa and the U.S. State Department have been extending the northern border closure month-to-month. Neither government has provided the metrics they’re using to judge when it’s safe to ease up.

Canadian Prime Minister Justin Trudeau said there are ongoing discussions with the American administration about the border restrictions, but gave no indication a relaxation is coming anytime soon.

“We’re all eager to be able to travel again,” Trudeau said Monday during a news conference in Montreal. “But I think we’re all going to wait patiently until such time as the health situation allows us to loosen border restrictions internationally. That’ll be eventually, but not for today.”

Truck drivers and “essential” workers in fields like health care and energy are permitted to cross the border in both directions as normal as long as they have no symptoms.

During the pandemic, unmarried couples separated by travel restrictions formed an online movement dubbed “Love Is Not Tourism.” Its members — 46,000 strong in a private Facebook group —  continue to press for relaxation of the U.S.-Canada border crossing rules and other countries’ travel bans. Last fall, the Canadian government loosened up a little bit by making some reunifications of people in long term relationships possible, but the winter surge of the virus soon prompted new quarantine and testing rules to further deter cross-border trips.

According to the Johns Hopkins University COVID-19 dashboard, the case incidence rate per 100,000 people in Washington state is hovering between double and triple the rate in British Columbia.

The vaccination rollout has gone slower in Canada than in the U.S. President Joe Biden vowed recently that there would be enough COVID vaccines for all American adults to get a shot by the end of May. In Canada, vaccine supplies are more limited and the best case scenario is to get all adults at least one shot by midsummer.

Coronavirus Closed The Border. This Bellingham – BC Couple Was Stuck On Opposite Sides

When COVID-19 caused border closures, a woman from British Columbia and her fiancé in Washington were unable to see each other — not even for their wedding. Continue Reading Coronavirus Closed The Border. This Bellingham – BC Couple Was Stuck On Opposite Sides

American-Iranians Say They Were Detained At U.S.-Canada Border. Federal Officials Deny It

Sixty Iranian-Americans say they were detained at the American border with Canada this weekend, according to CAIR, the Council on American Islamic Relations. Two other attorneys at the border, unrelated to CAIR, made similar observations. Customs and Border Protection denies those reports. Continue Reading American-Iranians Say They Were Detained At U.S.-Canada Border. Federal Officials Deny It