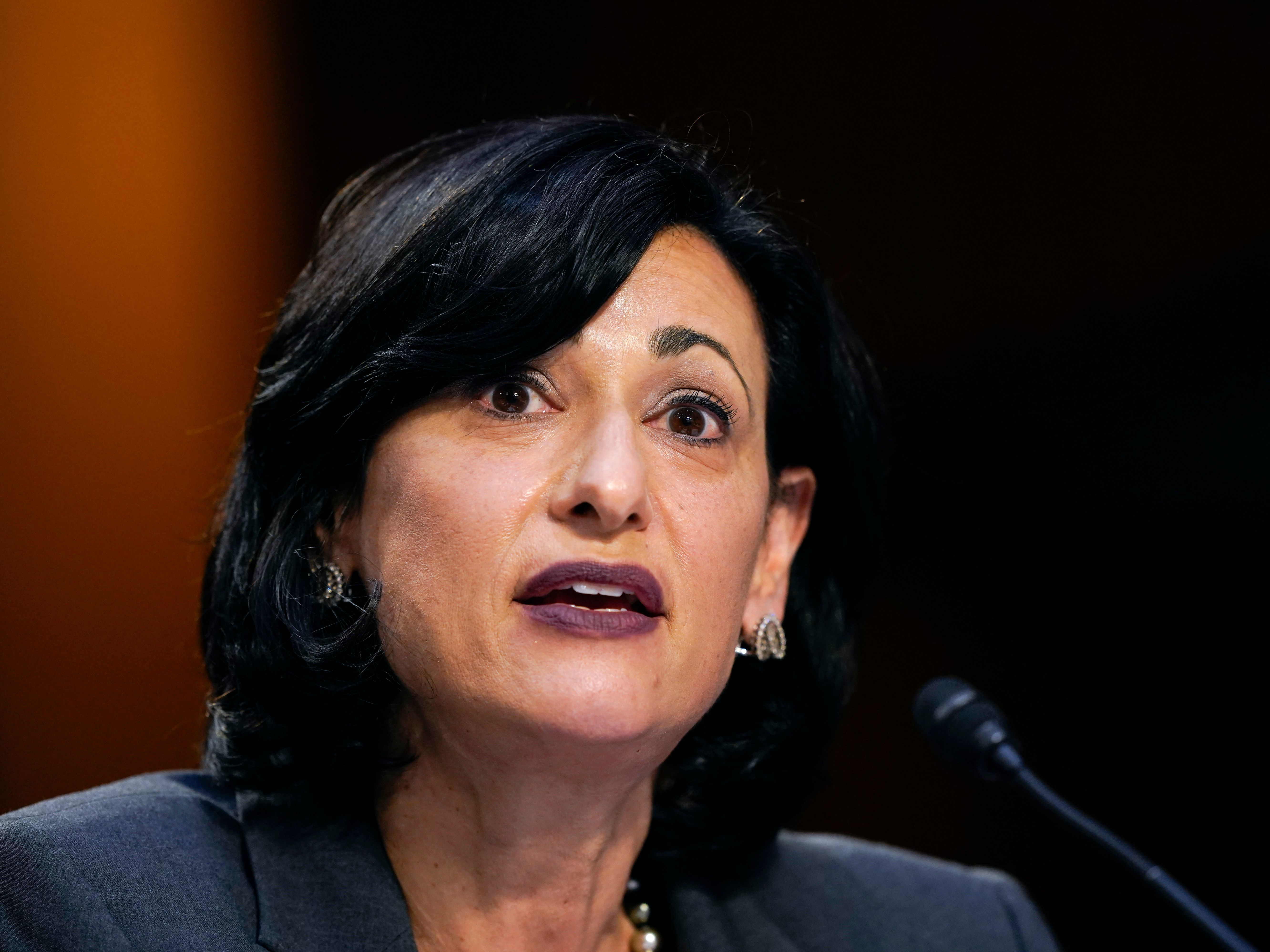 Amid growing optimism about the rising pace of vaccinations in the U.S., the director of the Centers for Disease Control and Prevention has one request for the American people: Don’t act as if the pandemic is over – it’s not.

In an emotional plea during the White House COVID-19 Response Team briefing on Monday, the CDC chief, Dr. Rochelle Walensky, described a feeling of “impending doom.”

“We have so much to look forward to, so much promise and potential of where we are and so much reason for hope,” Walensky said. “But right now, I’m scared.”

The cause of her concern? A rising number of coronavirus cases in the United States. The most recent seven-day average is just below 60,000 cases per day – a 10% increase compared with the previous week.

Dr. Rochelle Walensky, the CDC’s director, said Monday that she is “scared” by the rising number of coronavirus cases, hospitalizations and deaths in the United States. CREDIT: Susan Walsh/Pool/AFP via Getty Images

Hospitalizations are up, too: about 4,800 admissions per day over the last week, up from an average 4,600 per day in the previous seven-day period. And deaths, which tend to lag cases and hospitalizations, have also begun to rise: increasing nearly 3%, to a seven-day average of about 1,000 per day.

Walensky said those numbers are especially worrisome because the pattern looks similar to the trajectory of European countries, including Germany, Italy and France, which are now battling a new wave of infections.

“We’re in the life and death race with a virus that is spreading quickly, with cases rising again,” Biden said at the White House on Monday afternoon. “New variants are spreading and sadly some of the reckless behavior we’ve seen on television over the past few weeks means more cases are to come in the weeks ahead.”

“We’re giving up hard-fought, hard-won gains. And as much as we’re doing, America, it’s time to do even more,” he added.

Biden called on states and localities to reinstate mask mandates, calling masks “the only way we ever get back to normal.” He also reiterated his goal of having “a July 4th that’s closer to normal.” When asked if he thinks some states should pause their reopening efforts, Biden said “yes.”

Walensky and White House senior adviser Andy Slavitt said they would meet with governors Tuesday to discuss the increased supply in vaccines. Walensky said she would counsel governors and other leaders to stop lifting restrictions as quickly as they are, given that a surge may be imminent.

“Just please hold on a little while longer,” Walensky said. “I so badly want to be done. I know you all so badly want to be done. We are just almost there, but not quite yet. And so I’m asking you to just hold on a little longer to get vaccinated when you can — so that all of those people that we all love will still be here when this pandemic ends.”

“If we open up completely now, that is premature, given the level of infection” currently seen in the U.S., Fauci said. He added that even as the warm weather gives us the urge “to just cut loose, we’ve just got to hang in there a bit longer.” The likely reason for the uptick in cases, he said, is that states are opening up too quickly.

Walensky noted that the CDC has added substance use disorders to its list of underlying conditions that can increase the risk of severe COVID-19 or death.

On the subject of vaccination, the news was considerably better.

Among seniors, 73% have now received at least their first dose. Among all U.S. adults, 36% have received at least one dose. And more than 50 million Americans – nearly one in five adults — are fully vaccinated.

Vaccine manufacturers are on track to meet their targets, Slavitt said, and Johnson & Johnson will soon deliver 11 million doses.

Biden touted the increased vaccine supply of 33 million doses available this week, and said his pandemic response team will expand vaccination sites to ensure that 90% of Americans can get a vaccine within 5 miles of their homes. Ninety percent of American adults will be eligible for vaccination by April 19, he said.

The White House announced two new federally-run mass vaccination sites in communities identified as high risk: one in St. Louis and the other in Gary, Ind. Together the sites will be capable of administering 6,000 shots a day.

Biden also announced plans to help at-risk seniors and people with disabilities get vaccinated, including with transportation assistance.

Officials also discussed the latest in terms of vaccine “passports” like those proposed in the European Union and announced in New York, that would offer proof that a person has been vaccinated or tested negative for the coronavirus.

An interagency process is now under way with requirements for equitable and free access, data privacy and security, and availability in multiple languages.

Unlike the EU, the White House will not have government administer such passports. Slavitt explained the administration wants to be sure that Americans are comfortable with getting vaccinated.

“We do know that there is a segment of the population that is concerned that the government will play too heavy-handed of a role in monitoring their vaccinations,” he said. “In point of fact, it would discourage people, to feel like that was the role we’re playing.”

Instead, the plan is what Slavitt calls “the best of all worlds:” the government putting forth guidelines, but not itself being the keeper of vaccination data.