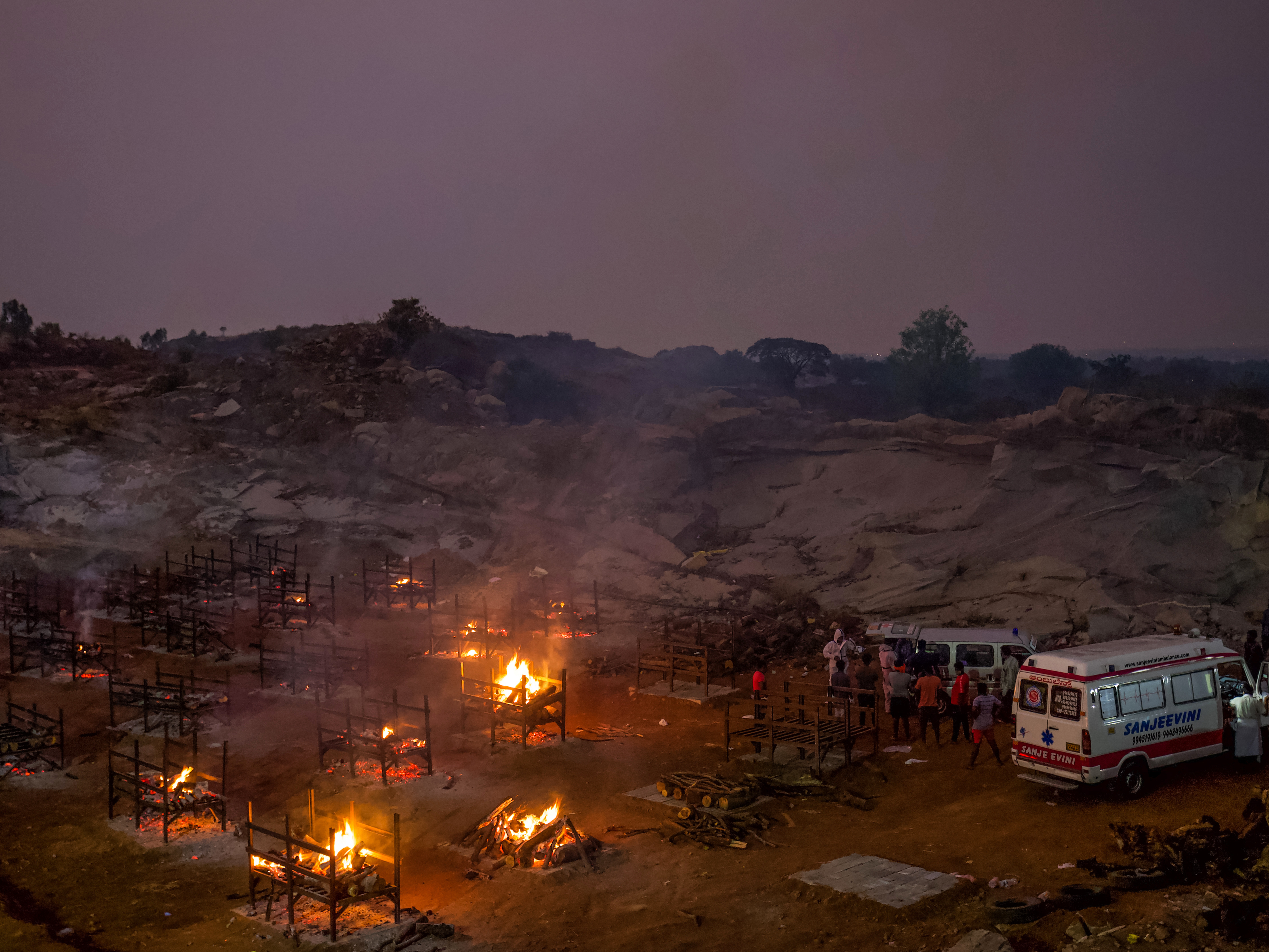 U.S. Will Impose New Ban On Travel From India As Coronavirus Rages

The Biden administration is set to enact a travel ban on any non-U.S. citizens or permanent residents coming to the country from India as multiple coronavirus variants have driven India’s COVID-19 outbreak to troubling new heights. The policy will take effect starting on Tuesday, the White House said.

India had already been under a Level 4 – Do Not Travel advisory from the State Department, which issued or updated scores of travel advisories related to the continued spread of the coronavirus last week. The new ban will take the precaution to a new level.

The policy will not apply to U.S. citizens, a Biden administration official said, speaking on condition of anonymity. Lawful permanent residents and other people with exemptions would also be allowed to travel from India to the United States.

Funeral pyres burn in a disused granite quarry repurposed to cremate the dead due to COVID-19 on Friday in Bengaluru, India. The U.S. is set to impose new travel restrictions against travelers from the country. CREDIT: Abhishek Chinnappa/Getty Images

As part of existing restrictions on international passengers, anyone arriving in the U.S. would still be subject to coronavirus testing measures and must enter quarantine if they have not been vaccinated.

The travel ban is being imposed on the advice of the Centers for Disease Control and Prevention, according to White House press secretary Jen Psaki.

In a statement issued Friday, Psaki said, “The policy will be implemented in light of extraordinarily high COVID-19 caseloads and multiple variants circulating” in India.

Like many countries, India dealt with an initial wave of the coronavirus in 2020. But it’s now enduring a tsunami of new cases, forcing a shortage of key resources, from hospital space to oxygen tanks.

Unlike some nations that have been able to avoid a new spike in deaths and critical hospitalizations despite recent outbreaks, India is also seeing an unprecedented number of deaths. The country reported nearly 3,500 deaths on Friday alone. And some health professionals allege that local officials have pressured them to underreport COVID-19 deaths, as NPR’s Lauren Frayer and Sushmita Pathak reported. Testing kits are also in short supply in India, feeding speculation that the scale of the outbreak is even larger than official reports suggest.

India has been setting, and breaking, world records for the most daily reported COVID-19 cases for the past week as its citizens and public health officials watch infection rates rise at terrifying rates. It reached a new high mark Friday when India’s Health Ministry reported 386,453 new infections.

The rate of new cases in India has steadily eclipsed the previous world record of more than 312,000 cases that the U.S. reported in early January. The U.S. remains the country with the most reported COVID-19 cases, with more than 32.3 million, according to data compiled by Johns Hopkins University. India has reported nearly 18.8 million cases.

Vice President Harris also told reporters Friday that a plane loaded with aid, including oxygen, was leaving the U.S. for India that night. “We have long-standing, decades-old relationships with India, with the Indian people in particular, around public health issues,” Harris said.