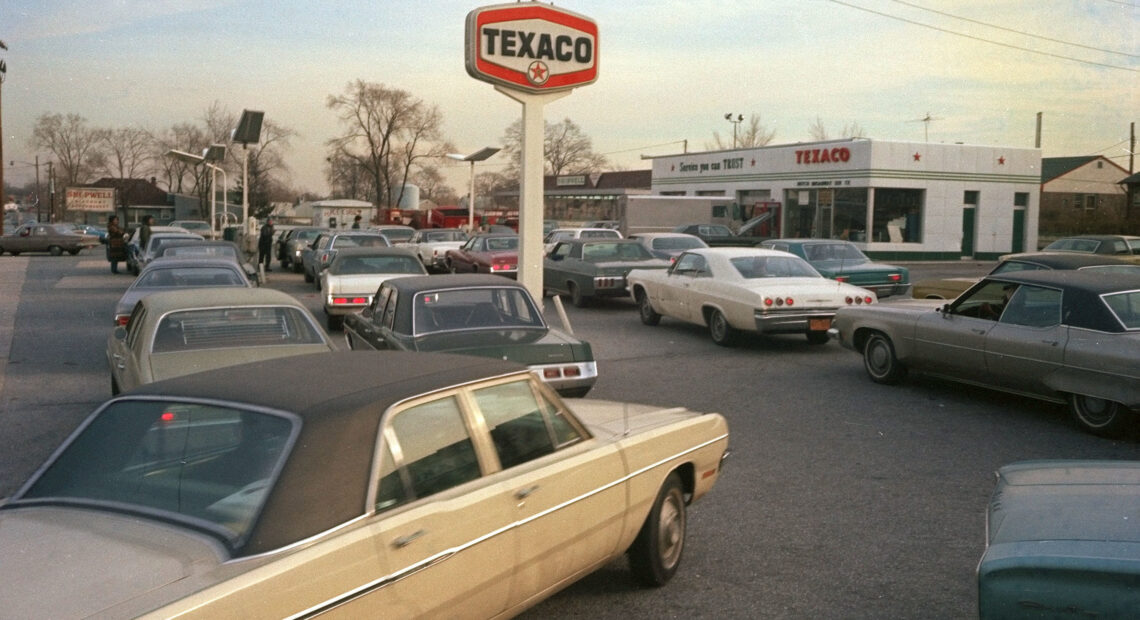 What turned out to be a short-lived shortage of gasoline at thousands of local stations had swiftly panicked those consumers most dependent on the fuel. Many queued up, filled up and then messed up by hoarding additional gallons in unsafe containers. The shortage was concentrated in the Southeast, but millions more all over the country watched on TV.

We may shake our heads at tales of extreme behavior, but we all got a stark reminder of the role gasoline plays in our daily lives and our national economy. The faraway DarkSide computer hackers who attacked Colonial Pipeline showed they could pinch an artery in our neck. And that’s really dangerous, for the economy and for the country. 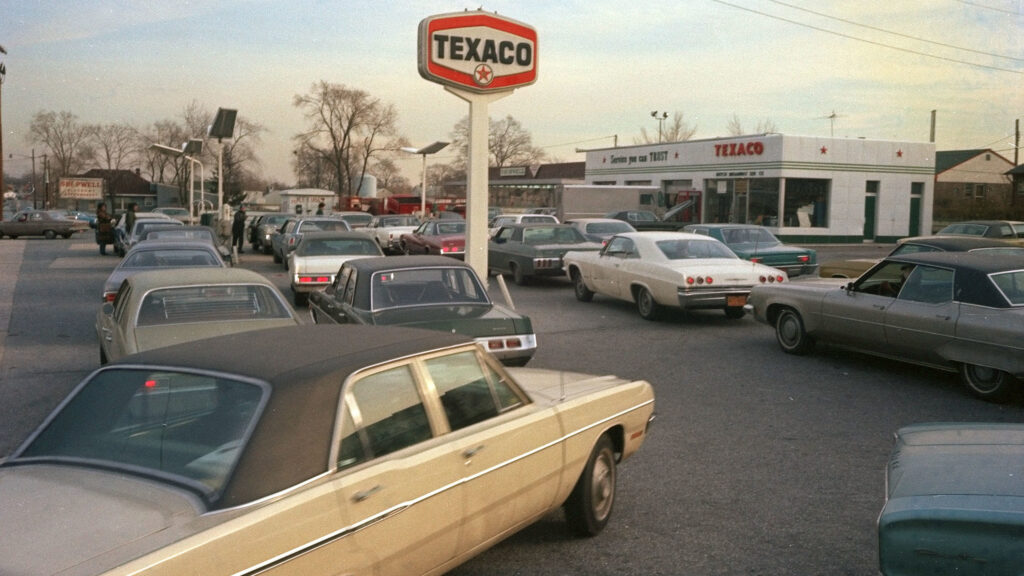 Motorists line up at a gas station on New York’s Long Island, hoping to fill their tanks during the gasoline shortage of 1973-74. Long lines and fuel restrictions were common across the country. CREDIT: AP

Some Americans actually remember the gas lines of the 1970s and how they contributed to the downfall of two presidents. And if you don’t, you’ve at least heard the stories and seen the pictures.

Any sort of energy disruption can spike prices, with rapid ripple effects. That may be particularly true when shortages of other raw materials are already stirring fears of inflation. And that’s not even to mention how such travails make it harder for a chief executive to manage other concurrent challenges.

All of which brings the danger home to President Biden and his party. So it did not seem outlandish for the White House to at least discuss calling out the National Guard, as NBC News reported they had, or considering other military options. The Pentagon issued a statement saying the president had not directed the military to assist.

Nor was it surprising that a Republican governor who may be a presidential prospect would declare a statewide emergency, as Florida’s Ron DeSantis did in response to the gas lines.

By midweek, Colonial got its 5,500-mile system working and the disruption looked likely to be over soon. Panic buying subsided. The news media moved on.

But the lessons remain to be learned.

The Colonial shutdown surely demonstrates the vulnerability of the energy sector — and U.S. industrial plants in general — to cyberattackers demanding ransom money. If rogue cyber gangs can cause this much havoc, how much more might a hostile military power be able to accomplish?

(Administration officials have indicated that the hack came from inside Russia but was not necessarily connected to Russian President Vladimir Putin or his previous partners in cybercrime.)

Should the kind of gas lines we saw in Southeastern states this past week occur again, they would signal trouble of the direst kind for any president. Biden, with his stated commitment to move away from fossil fuels as fast as possible, would be especially vulnerable.

The administration has made clear its long-term commitment to independence from fossil fuels. But in the time it takes to get there, Biden & Company will have to answer to an electorate still dependent on those fuels. And a chorus of critics will be standing by to blame any shortage on Biden’s policies, whether fairly or not.

Not so long ago

The median American age today is about 38, so fewer and fewer of us recall being in those gas lines of the 1970s. But those lines have had a place in the national memory like the gut punches of presidential assassinations and major terror attacks. In 1973, when the first Arab oil embargo backed up drivers for blocks and quadrupled prices at the pump, one presidential adviser compared the event to the Pearl Harbor attack that brought the U.S. into World War II.

The embargo led the U.S. to take a greater interest in the Middle East and instability in the region, setting the stage for multiple wars and military interventions.

The president at that time was Richard Nixon, a Republican who a year earlier had been reelected in a 49-state landslide. But in the first October of his second term, Nixon was beset by two crises. One was the Watergate scandal, a tangled tale of abuse of power, skullduggery and cover-up that had drawn the probing eyes of Congress and a special prosecutor and the media. 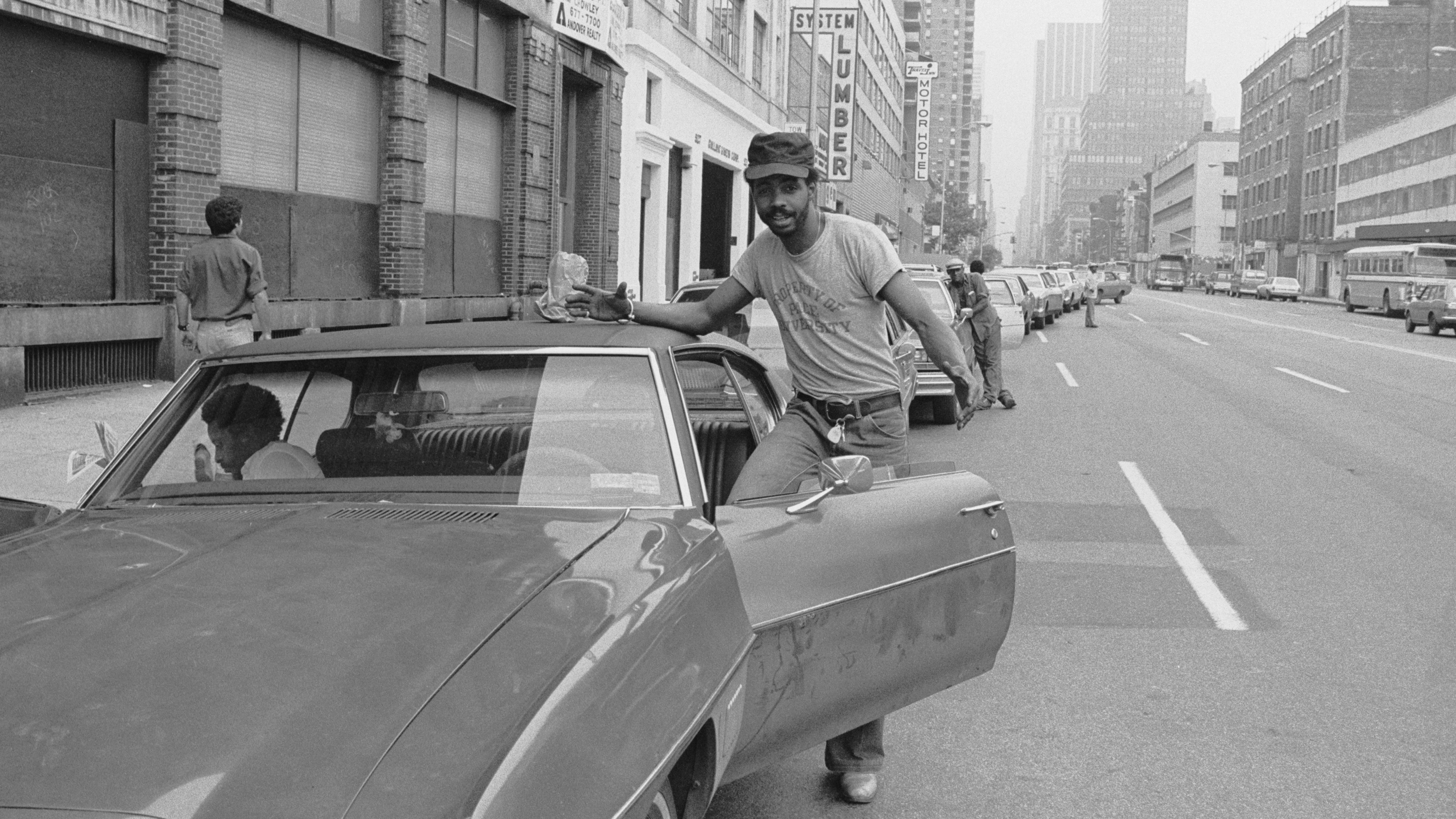 Motorists queue up outside a gas station in New York City in June 1979. The 1979 Iranian revolution led to a drop in worldwide oil production. CREDIT: Brian Alpert/Keystone/Hulton Archive/Getty Images

The other crisis was a shooting war that had broken out when Israel was suddenly attacked by several of its Arab neighbors on Yom Kippur. Israel was briefly on the ropes before the U.S. weighed in to shore up its ally, enraging Saudi Arabia and some of the other Arab countries that were exporting a growing share of the oil used in the U.S. When they cut off shipments, it took only days for shortages to appear and provoke panic buying and endless lines. Drivers ran out of gas while waiting in line.

Nixon’s approval rating had already been sliding from its peak of 67% in January. Then the Arab embargo began the same month Nixon fired the special prosecutor in the Watergate case, and the floor fell out. Nixon’s approval fell to 27%. The embargo stretched on for six months, Watergate eventually forced Nixon to resign and he never again rose above 30% (his final approval was 24%).

Fred Emery, a BBC correspondent who covered the White House in this era, later wrote a 500-page history called Watergate.

Fast forward to Jimmy Carter, a Democrat elected in 1976 largely as the candidate least like Nixon. Carter helped broker peace between Israel and Egypt, but saw his presidency run aground on another oil-producing Middle Eastern country, Iran. The 1979 Islamic fundamentalist revolution there initially put a dent of just 4% in worldwide production, but the price of oil would double in 12 months.

Carter’s approval rating, which was at 50% as 1979 began, sank steadily, reaching a low of 28% in July — the lowest point of his presidency.

Ironically, Carter’s numbers would improve that winter after Iranian students overran the U.S. Embassy in Tehran and took 52 Americans hostage for the rest of the Carter presidency. There may have been some “rally ’round the flag” effect in the public’s initial response to the hostage episode, but Ronald Reagan still brought Carter’s time in office to a close with an Electoral College landslide in November 1980.

Like Nixon, Carter surely had problems beyond the gas lines, odd-even days of rationing and budget-bruising price spikes. But those Washington scandals and international affairs did not disrupt the daily lives of ordinary voters, at least not as fast or as painfully as unavailable or unaffordable gasoline does.

The effectiveness of any American president is always a matter of dispute in the media and the hurly-burly of an election campaign. But there is no arguing with the sight of gas lines, or the real hardships they can bring to individuals.

Something about seeing cars and trucks backed up for blocks connects to a deep and dark set of fears in the American psyche. To be sure, millions depend on their gas-fueled vehicles to get to their jobs, which often entail life-and-death services. Millions more just don’t want to ever worry about the needle on the gauge or the numbers on the dashboard computer.

This time, the figurative rerun of That ’70s Show lasted only a matter of days. But what about next time? Surely no one thinks this time was the last.