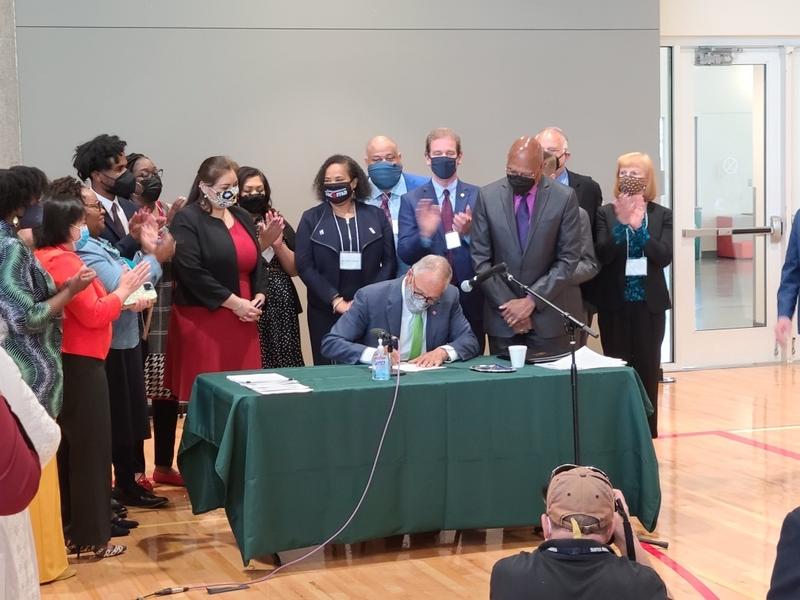 Calling it a “moral mandate,” Gov. Jay Inslee on Tuesday signed into law a dozen bills that backers hope will improve policing in Washington, reduce the use of deadly force and ensure that when deadly encounters do occur the investigations are thorough and independent.

“These bills are all going to work in coordination with one another to create a system of accountability and integrity stronger than anywhere else in the nation,” Inslee said in remarks before he signed the bills.

The Legislature passed the police accountability measures in response to sweeping calls, nationally and locally, to reform policing following the killings of Black Americans like George Floyd in Minneapolis and Breonna Taylor in Louisville. In Washington, the death of Manuel Ellis at the hands of Tacoma police in March 2020 also galvanized reform efforts.

“We knew we had to do something,” said Democratic state Rep. Jesse Johnson, the vice chair of the House Public Safety Committee and sponsor of three of the bills, in a recent interview on TVW’s “Inside Olympia” program.

In crafting the bills, Democratic lawmakers worked closely with advocates and families who have lost loved ones to police violence. Some of those families attended the bill signing ceremony at the Eastside Community Center in Tacoma.

“It is my hope that other families will not have to endure what I did in order to get justice and reclaim my son’s legacy,” said Sonia Joseph of the Washington Coalition for Police Accountability whose 20-year-old son Giovonn Joseph-McDade was killed by Kent police in 2017.

The focus of the bills runs the gamut from the tactics officers use in the field to how deadly force incidents are investigated to the circumstances under which officers can be decertified.

In a statement Tuesday, the Washington Black Lives Matter Alliance praised the suite of police accountability measures as a “potential sea change.” But the organization also cautioned that the next test will be in how the new laws are implemented.

“These laws must now be enforced. That’s up to police and prosecutors, judges and juries, administrators and adjudicators. And it’s up to us,” the statement said.

Other bills signed by Inslee on Tuesday will establish a statewide use of force database, ensure that police agencies notify prosecutors about officers with credibility issues and make it easier for families to sue the police over deadly force encounters.

Inslee also signed a bill that instructs the state auditor to review all completed deadly force investigations to ensure that rules and procedures were followed.

A final bill creates a state-funded grant program administered by the Department of Commerce to fund local projects aimed at building partnerships between communities and law enforcement. An example is the Pierce County Safe Streets program that works to reduce youth violence and provide personal safety education to vulnerable adults.

“All of these bills together I think are a constellation of efforts to create accountability and justice within the system, and I think it’s going to make things safer,” said Rep. Johnson who is a member of the Legislature’s Black Members Caucus.

Many Republicans, though, disagreed. In fact, state Sen. Mike Padden, the ranking Republican on the Senate Law and Justice Committee, went so far as to call the package of bills “hostile to law enforcement.”

Specifically, Padden criticized the ban on the Lateral Vascular Neck Restraint — a technique used by many departments nationally — which he argued if applied properly can be safe and effective.

“It’s a shame to see that tool taken out of the tool box,” Padden said on “Inside Olympia.” Padden also said the limits on vehicle pursuits go too far.

Regarding the handling of deadly force incidents, Padden said he would have liked to give changes adopted by the Legislature in 2019 more time to be fully implemented.

The package of reform measures also divided police groups. For instance, the Fraternal Order of Police said it could support some new restrictions that other groups did not.

In a carefully worded statement following the end of the legislative session, the Washington Association of Sheriffs and Police Chiefs (WASPC) said it “supports many of the concepts” passed by the Legislature.

Despite the plethora of bills that passed this year, a number did not. They include a measure to authorize the state Attorney General to prosecute cases of police deadly force, a bill to increase the minimum age of police recruits and a requirement that police departments with at least 15 officers to have a community oversight board.

Another bill, which was a top priority of families this year, would have made it easier to sue individual officers in state court for alleged constitutional violations by ending so-called qualified immunity.

Several, if not all, of those bills are likely to be reconsidered during the 2022 legislative session.

“This year was a first step toward greater accountability and justice in the system, but it’s definitely not the end. It’s just the floor, not the ceiling,” Johnson said.