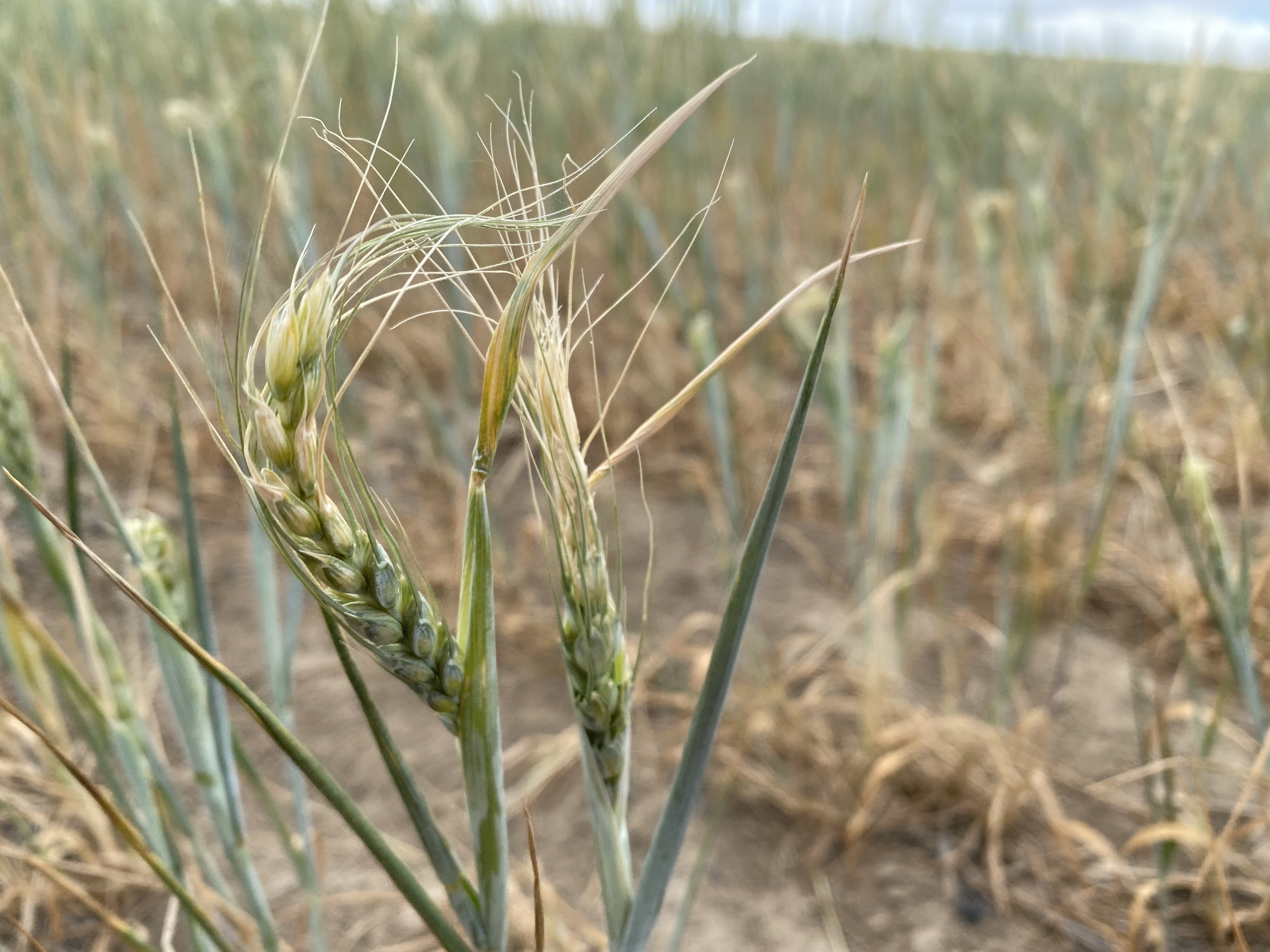 It’s so short and sparse, she doesn’t think the combine can even reach the wheat without eating rocks.

“Combines don’t like dirt and rocks,” Berg says. “They get indigestion.”

Berg is a dryland wheat farmer in the sweeping Horse Heaven Hills of south-eastern Washington. She shows off one head of half-turned golden wheat amid a sea of them. Besides being too short, the plant’s kernels didn’t fill out properly.

“See how the wheat head is curled like that?” Berg asks. “And then you break into it, you might have some berries down here, but this will be empty. There is no wheat inside the wheat head. It’s a sad situation. It’s farming though. You know, thank goodness for crop insurance.”

Northwest farmers like Berg and ranchers who depend on rain are expecting what one farmer called a “somber harvest” this year.

Some stunted wheat fields won’t see the combine this summer. Cattle operators are severely cutting back their herds for lack of grass. Little moisture since February in wide swaths of the Northwest is to blame. And drought is deepening across the West, with federal drought maps showing massive and growing areas of red. 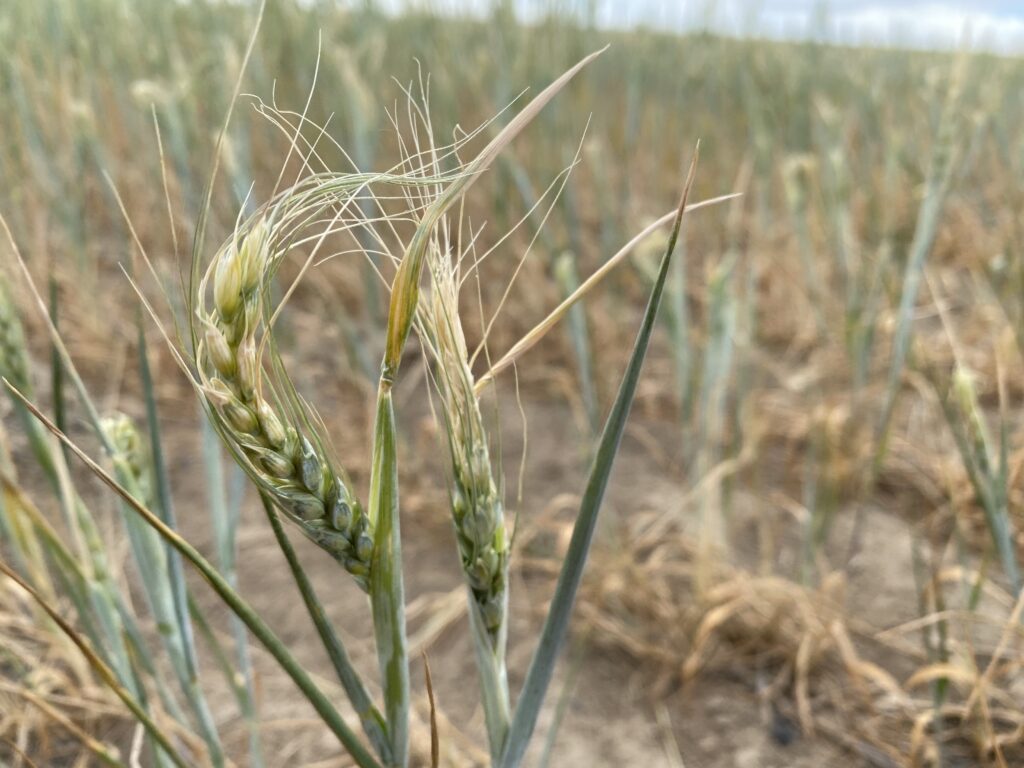 Wheat at the farm of Nicole Berg in Washington’s Horse Heaven Hills shows signs of a drought so far in 2021, with a damaged, curled head. CREDIT: Anna King/N3

On her ranch, Berg says she’s also worried about 1,000 acres of native grass seeds she has to plant this year into dry soil for a government conservation program. She says with all the Western wildfires in recent years, the wild grass and forage seeds have become very expensive. She hates to plant them in shallow, bone-dry soil with the hope of getting sufficient rain only to lose the crop.

The Berg’s aren’t the only ones suffering. It’s bone dry from Spokane, near the Washington-Idaho border, clear to Harney County in south-eastern Oregon, with triple digit temps on the way even later this week for some parts of the Northwest.

Now the drought is rapidly reaching into the usually cooler and wetter western Oregon, according to Ryan Andrews, a hydrologist for the state’s Water Resources Department.

“If you look at the wetness soil profiles, they are in rough shape right now,” Andrews says. “That will impact stream flows.”

He says this is the second driest March and April in Oregon, only behind the parched spring of 1924.

In Harney County, some cattle operators are considering selling off parts of their herds. There’s no grass. Even the cheat grass is sparse and already baked red weeks early.

Jeff Marti is a drought expert for Washington’s Department of Ecology. He says conditions in the state are the fourth driest since 1895. The other dry years were 1926, 1924 and 1911.

“For anybody farming right now, they haven’t seen it this dry out there,” Marti says.

On Thursday, May 27, the state declared a drought advisory, encompassing 29 of Washington’s 39 counties — most everywhere but the Cascades and those counties surrounding Puget Sound.

Marti explains that irrigated crops like cherries and apples will likely be OK this year, but dryland (non-irrigated) farmers will suffer.

“We have an interesting situation where we have a really good snowpack this year,” Marti says. “So, lots of water sitting up high in the mountains, and that’s a great thing, but we have had some extended dryness. And so definitely, that’s going to affect the runoff in some of our basins that are more rain dominated that don’t benefit from snowmelt.”

Marti says some basins on both the west and east side of the Cascades are already showing some strain.

“It’s the story of the irrigation haves and the have nots,” Marti says. “Meaning those folks who get their water from rivers or storage, are probably going to be fine for their irrigation needs. But the dryland users and the folks that have cattle that depend on forage on the rangelands may be more challenged.”

A metal gate sharply whines and creaks a bit west of Alderdale, Washington, southwest of the Tri-Cities along the Columbia River. Manning the gate with a slow amble is cattle rancher Gary Hess, who’s having a hard time with the drought.

Out here in this irrigated pasture are about 120 of his 10-year-old cows, the year’s culls, and all their calves. The grass-fattened mothers bawl at their calves, wanting them to stay close and away from the cattle dog. This is the cows’ last year on the ranch, so Hess lets them graze in hip-high green fescue, orchard and rye grasses for their last summer. 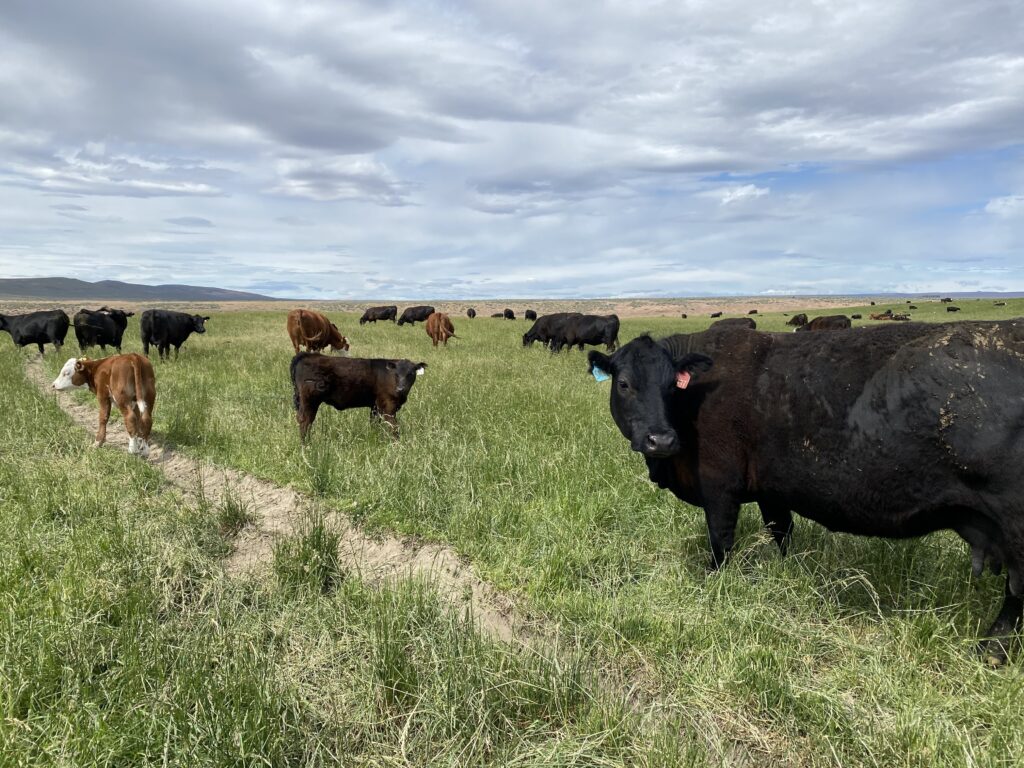 120 pair of cows and their calves loaf and graze in a tall, irrigated pasture on the McBride Ranch, May 24, 2021. CREDIT: Anna King/N3

Hess recently sold another 70 mother cows with calves at their sides to another operator in Wyoming. They had many more good calves in them, and he hated to see them go. But he has no grass to keep them.

“When you have to sell younger cows, that’s a disappointment,” Hess says. “But that’s something you have to do with the kind of weather we’ve had the last couple of years. And the drought and the lack of feed and lack of water, we just finally had to cut back.”

The 70 mother cows and their calves make up about 12 percent of his total herd, and he’s thinking he’ll have to sell more soon just to survive. Hess says it’s hard to lose animals and bloodlines that he’s worked so hard to build up. His McBride Hereford ranch is now six generations old. He figures it could take him up to a decade to build his herd back up without going into debt. 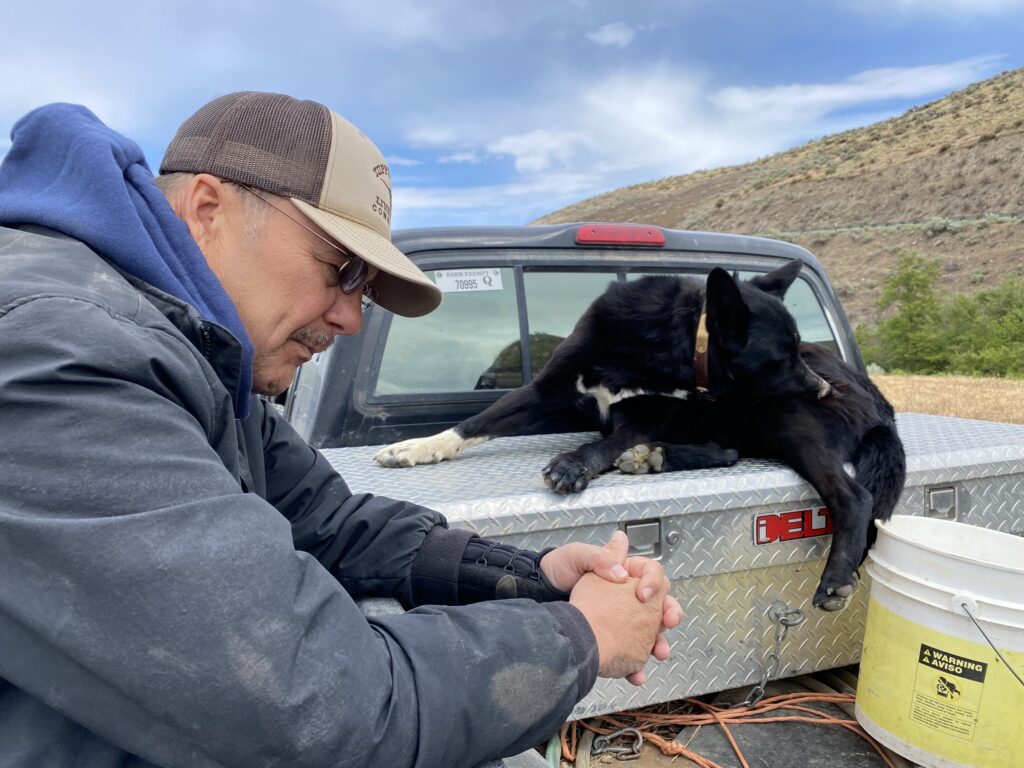 Gary Hess and his cattle dog, Buddy, have been at work so far in 2021 not just herding cows but selling off some of the herd, anticipating a bad year due to little rain and poor grass-growing conditions to feed the cows. CREDIT: Anna King/N3

“Livin’ the dream,” Hess says. “Sometimes it’s a good dream, sometimes it’s a nightmare. But that’s what we choose to do. Our family has been here over 100 years, and they’ve been through this before. We’ll do it just like the others have. We’ll just find ways. We’re not going to give up.”

Usually in this area, Hess is lucky to get six to eight inches of rain annually. But this year he figures he didn’t get even two. A bred cow on this range needs about 40 dryland acres of bunchgrass for half a year of grazing to ensure enough milk for a calf. But with this drought on, that’s nearly doubled. So he has to sell some cows now, or the animals would have to be fed expensive hay until next spring. Hess’ eyes start to well a bit thinking of the good mother cows and calves sent down the road.

“It’s just something we had to do,” he says.

The near constant wind whistles and howls around anything with a corner. It buffets the sage and rabbit brush. It’s been windy all spring. Like a blowdryer, it’s parched the landscape even more. What rain squalls there’ve been have missed this thirsty landscape altogether, or just teased with a few drops.

But most ranchers don’t have time to dwell on the relentless wind, the trucked-off cattle or the lost crops. They’re busy applying for federal disaster aid and keeping an eye out for wildfires that are always top-of-mind in the dry, hot summer on the horizon.