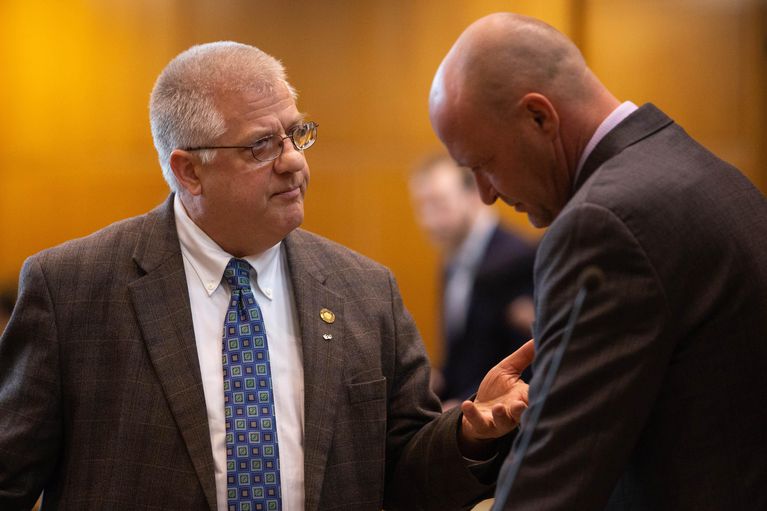 In a widely anticipated vote, the Oregon House approved a resolution that formally found Nearman’s act of opening a Capitol door for a far-right crowd on Dec. 21 amounted to “disorderly behavior,” the constitutional standard for ejecting a legislator. The resolution passed by a vote of 59-1, with only Nearman voting against.

“This is potentially the most serious and historic vote any of us will ever take in our career as legislators,” said state Rep. Julie Fahey, D-Eugene, toward the end of a somber, relatively brief debate in which Nearman was the only Republican to speak.

Nearman, granted unlimited time to speak, instead kept his remarks short. As he has consistently, he argued that the ongoing closure of the state Capitol is unconstitutional, and by allowing protesters into the building he had done the right thing.

“You’re considering expelling a member, for the first time in history, because he thinks that people should have access to their Capitol, especially during session,” Nearman said. “After this session, we’re all going to go out to dinner or stop at the grocery store, or maybe tomorrow we’ll shop and buy clothes or get our oil change, because all these places are open, but not this building.”

Outside the building, several dozen of Nearman’s supporters gathered in protest of the vote, with at least one person briefly kicking the Capitol’s facade.

Earlier in the day, a special committee created for the sole purpose of considering Nearman’s fate had approved the expulsion resolution unanimously. That 6-0 vote, evenly divided between Republicans and Democrats, sent a clear signal that the Polk County Republicans’ time in the House was coming to a close.

Rep. Andrea Salinas, D-Lake Oswego, said it was, “upsetting to learn that Rep. Nearman was planning and coordinating an attack on our Capitol… The trauma of that day will not leave with Rep. Nearman.”

Nearman had faced calls to resign for five months, ever since OPB reported he’d allowed far-right demonstrators, some armed, into the locked state Capitol building as lawmakers met in a special session on Dec. 21. Surveillance footage of his actions followed shortly after.

But the scope and strength of that pressure exploded late last week, when a video emerged of Nearman actively plotting the incursion with supporters days beforehand.

What had been a relatively plodding investigation, rapidly gained speed with House Speaker Tina Kotek on Monday introducing a resolution to expel Nearman and forming a special committee to consider it. The same day, all of Nearman’s House Republican colleagues — a group that had been mum on his actions for months — sent him a letter calling on him to resign.

“Given the newest evidence that has come to light regarding the events of December 21, 2020, it is our belief as friends and colleagues that it is in the best interests of your caucus, your family, yourself, and the state of Oregon for you to step down from office,” the letter said.

Individual Republicans have added to those comments in recent days. On Wednesday, state Rep. Bill Post, R-Keizer, penned an account of why he was urging Nearman to resign. Post concluded that Nearman had lied to him and other Republicans about what evidence existed about his intent on Dec. 21.

“About five weeks ago, as one of the closest colleagues he has in the Capitol, I asked ‘is there ANY further video or other evidence?’” Post wrote on his personal website. “He said ‘no.’ That is the crux of the problem: he lied. To me personally and to the Republican caucus.”

House Republican Leader Christine Drazan told OPB on Thursday, she had not believed Nearman intended to allow people into the Capitol until footage emerged June 4. She said she believes people might have been killed without the quick intervention of police.

And Rep. Daniel Bonham, R-The Dalles, said he’d concluded Nearman must be expelled, even though he believes Nearman is a smart lawmaker whose intentions were merely to open up the governing process to the public.

“I believe that’s what he wanted to do,” Bonham said, adding: “There was a great error in judgment that day… I saw the people outside. Nobody should opened a door to the people who were here that day.”

But Nearman refused his colleagues’ entreaties. He told conservative radio host Lars Larson on Monday that he’d force the House to vote him out rather than resigning. He even suggested there might be an upside to becoming the first-ever member of the Oregon House to be expelled.

“Someday you’re gonna be watching ‘Jeopardy’ and somebody’s gonna say, ‘Who is Mike Nearman?’ And that’s gonna be the right answer,” Nearman said.

In remarks Thursday, Nearman took a more defiant tone. Speaking before the special House committee, the lawmaker repeatedly suggested that leading Democrats had violated the constitution by closing the Capitol to the general public; a step meant to curb the spread of COVID-19.

“Expelling me will not make the building any safer,” Nearman said in a prepared statement. “What will make everyone safer is if legislative leadership, beginning with the Speaker and the Senate president, admit that what happened in this building on December 21st was wrong and never should have happened. They never should have excluded the public from the public’s building.”

He declined to answer questions, citing advice from his attorney.

With Thursday’s vote, Nearman’s seat is considered vacant. County commissioners in Benton, Marion, Polk, and Yamhill counties will be responsible for choosing a Republican to fill out the rest of Nearman’s term, which expires in 2022.

A four-term lawmaker, Nearman had served in the House since 2015, earning a reputation as one of the chamber’s most conservative Republicans. He has worked on an unsuccessful attempt to recall Democratic Gov. Kate Brown, was a plaintiff in a lawsuit seeking to overturn Brown’s emergency orders to address COVID-19, and was among 11 sitting state lawmakers to sign a letter in support of a Texas lawsuit challenging the 2020 presidential election.

More recently, Nearman was one of three Republican lawmakers to file a referendum seeking to undo new gun control laws. He’d also worked as a senior fellow at the conservative Freedom Foundation, but resigned Monday as the organization sought to distance itself from his actions.

Nearman was at the Freedom Foundation’s Salem office on Dec. 16, when he met with members of a group called Oregon Citizens’ Lobby.

In video footage of the meeting, Nearman begins by guiding members of the group through some basics about following the Legislature. But when discussion shifts to the upcoming special session, and the fact that the Capitol will be closed to the general public, Nearman brings up something he calls “Operation Hall Pass.”

“Which I don’t know anything about, and if you accuse me of knowing anything about it, I will deny it,” Nearman says in the video.

Nearman continues, saying, “There might be some person’s number which might be [his cell phone number], but that is just random numbers… that’s not anybody’s actual cell phone. And if you say, ‘I’m at the West entrance’ during the session and text to that number there, that somebody might exit that door while you’re standing there.”

Five days later, that’s exactly what came to pass. Participants in a “non permitted flash mob” put on by far-right groups to protest COVID-19 restrictions, gathered at the Capitol. Some menacing lawmakers as they looked out their windows at the crowd.

Shortly before 8:30 am, as the House was convening upstairs, Nearman exited out a door that several demonstrators were standing near, allowing them to quickly gain a foothold in the building..

The group immediately began shoving police who were trying to clear them out. At one point, a man allegedly used bear mace on officers, forcing them to back down and allowing more people into the building.

Police made several arrests before clearing the Capitol, and no demonstrators made it past a vestibule near the building’s rotunda. Some members in the crowd later broke glass doors and assaulted journalists outside of the building.

Nearman’s been tied to right-wing protests at the Capitol before. In 2017, his then-legislative aide gave a gun to a convicted felon, who then brought it to a pro-Trump demonstration at the building, the Oregonian/OregonLive reported. Court records show the aide, Angela Roman, pleaded guilty to a misdemeanor in the incident.

Being forced from the Legislature is the most severe consequence Nearman has received for his role in the Capitol incursion. Prior to resigning, Nearman had had his committee assignments and 24 access to the Capitol taken away. He was also required to give notice before entering the building.

Nearman also faces two misdemeanor charges stemming from the incident. The next hearing in the case is scheduled for June 21, exactly six months after he opened the door for demonstrators.

In a one-day special legislative session called to address a number of pandemic-related crises, lawmakers also voted to protect schools from lawsuits related to COVID-19 and to bolster bars and restaurants by allowing cocktail sales to go. Those proposals all passed relatively speedily. The real tumult was happening outside. Continue Reading Oregon Lawmakers Offer Relief For Renters, Protesters Vandalize Capitol During Special Session