Young salmon are now spawning above Grand Coulee Dam. The fish were brought above the dam last year in an effort to see if salmon could survive in the area that’s been blocked for nearly 80 years.

After releasing 100 salmon above Grand Coulee last August, biologists with the Confederated Tribes of the Colville Reservation’s Fish and Wildlife Department documented around 30 redds, where salmon lay their eggs, and 70 juvenile fish.

Colville Business Council Chairman Rodney Cawston says those numbers give the Colville Tribes hope “to preserve our culture and to teach future generations about salmon and how to respect our natural and cultural resources.”

“With the construction of Chief Joseph and Grand Coulee dams, our people were separated from tradition and loss of salmon populations had a large impact on our people. Our people feel they have never intentionally relinquished their rights to the resources and fishing practices that historically have been a significant part of our lives,” Cawston said. 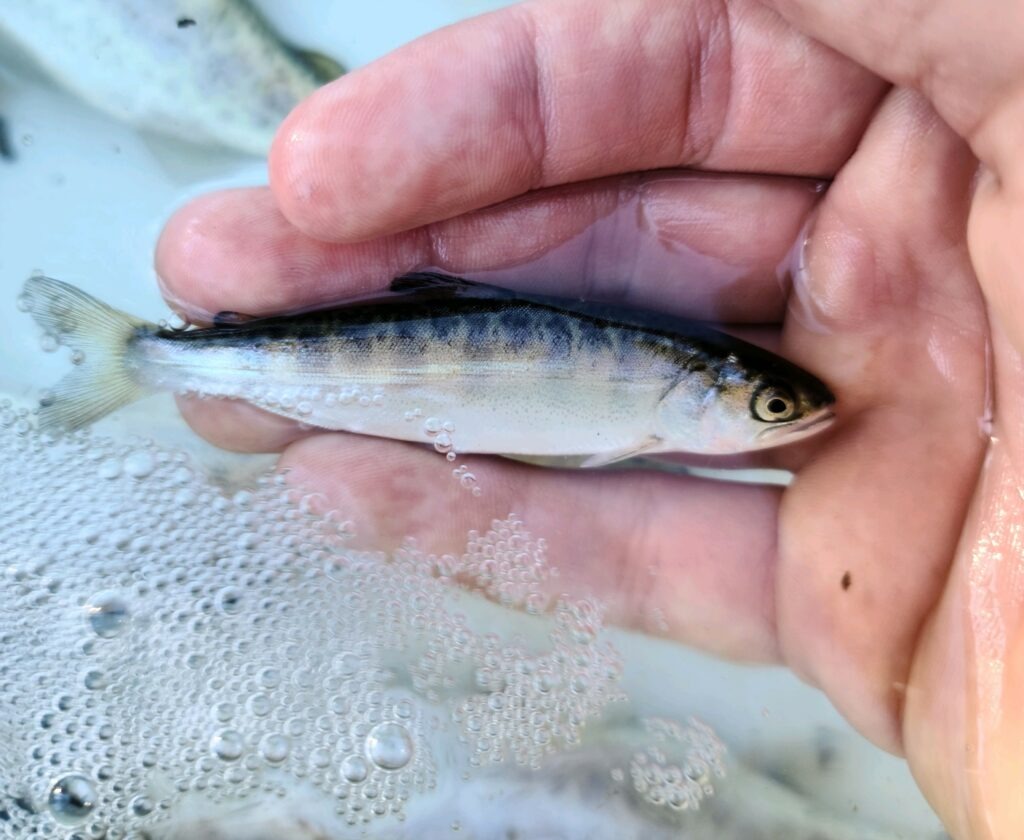 Biologists with the Colville Tribes’ Fish and Wildlife Department have tracked young salmon spawning in the Columbia River waters behind Grand Coulee Dam, in Lake Roosevelt and the tributary Sanpoil River. Courtesy of Colville Tribes

The salmon biologists trapped are younger than 1-year-old and about the length of your ring finger. The screw trap was meant for Redband trout that are migrating out to the Pacific. After the surprise salmon showed up, biologists tagged them to monitor their path to the ocean.

The PIT tags allow the fish to be tracked as they pass dams downriver of the blocked area. Biologists say the chinook salmon were swimming from the Sanpoil River into Lake Roosevelt, the reservoir behind Grand Coulee, heading downstream.

“If it survives migrating past Grand Coulee and Chief Joseph dams, then we will be able to detect it as it migrates downstream,” said principal biologist Holly McLellan.

McLellan said biologists will continue to tag chinook that are longer than 65 millimeters.

Biologists say they knew the reintroduced salmon were able to spawn in Lake Roosevelt tributaries. Now, they’ve got more proof the habitat is good for salmon spawning. Cultural reintroductions began in 2019.

Studies to determine how best to reintroduce salmon to the blocked area will take decades. The first phase of the reintroduction effort recently wrapped up.

“It is exciting to document successful salmon reproduction in the Sanpoil River after such a long absence,” said research scientist Casey Baldwin. “We knew that the adult salmon were effective at spawning last fall, but seeing the juveniles in this spring sampling really proves that the effort to reintroduce salmon has a lot of potential.”

Bringing salmon back to the Upper Columbia has been a goal since the habitat was blocked by the Chief Joseph and Grand Coulee dams more than eight decades ago. Tribal members held a Ceremony of Tears 80 years ago when the final run of salmon returned. Continue Reading Some Good 2020 News: Salmon Spawning In Upper Columbia River After 80 Years

Climate change and reducing greenhouse gas emissions are not part of the $3 trillion in U.S. relief packages passed so far — despite a long history of funding energy programs after economic crises. Continue Reading Absent From Stimulus Packages: Overhauling Energy And Climate Programs, As Past Ones Have