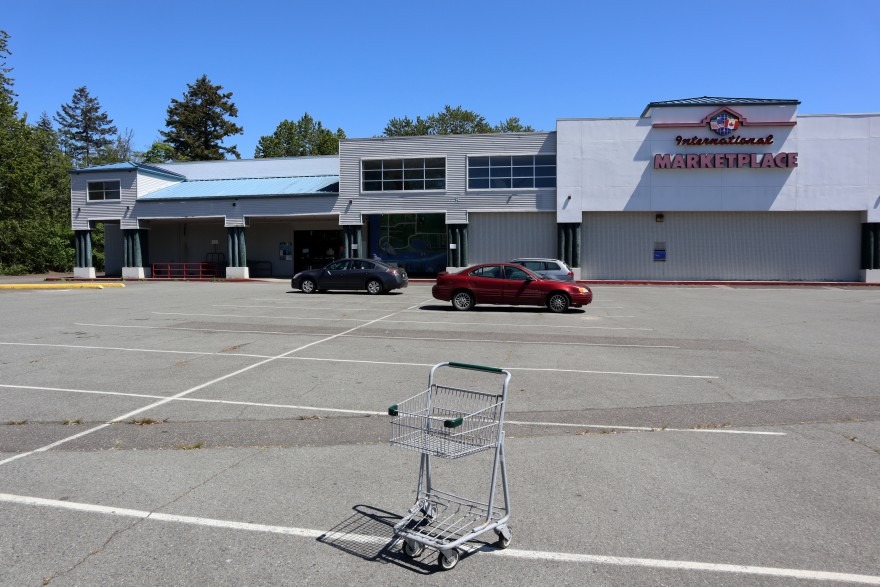 A local fire chief is warning of a looming “humanitarian crisis” on the peninsula of Point Roberts in northwest Washington state. It’s a strange predicament brought on by a money-losing supermarket and pandemic-related restrictions on crossing the U.S.-Canada border.

The owner of the only grocery store in the exclave of Point Roberts said she is tapped out and will have to close around July 15 unless the international border fully reopens or her business receives an emergency government bailout. The supermarket depends on Canadian visitors and second home owners to make a profit, and those shoppers have been unable to come over for 15 months.

“Now that I see that there is absolutely no end in sight, I can’t do it anymore,” said Ali Hayton, owner of the Point Roberts Marketplace store. “I cannot financially keep subsidizing all of this by myself.”

Hayton said she is losing over $30,000 per month by keeping the supermarket open. She said she received two small forgivable payroll support loans from federal pandemic relief programs, but that money was used up within a week.

Point Roberts is a geographic oddity whose only overland connection to the rest of the U.S. goes through the suburbs of Vancouver, Canada. Community leaders argue there is no reason to restrict their border crossing anymore given that nearly everyone living on the five square mile peninsula is fully vaccinated.

By agreement of both the U.S. and Canadian federal governments in March 2020, the full length of the northern border was closed to nonessential crossings in both directions to control the spread of the coronavirus.

Just last week, the Canadian government extended the nonessential border crossing ban for another month through July 21. The U.S. Department of Homeland Security went along with the extension, while noting the Biden administration is holding discussions about how to ease restrictions safely.

“Immediate action to open the Boundary Bay Port of Entry needs to be taken for my community,” Carleton wrote to the Canadian consul, Washington Gov. Jay Inslee’s office and the state’s congressional delegation. “If no action is taken, you will be responsible for the destruction of an entire US/Washington State community and place Point Roberts into a humanitarian crisis.” 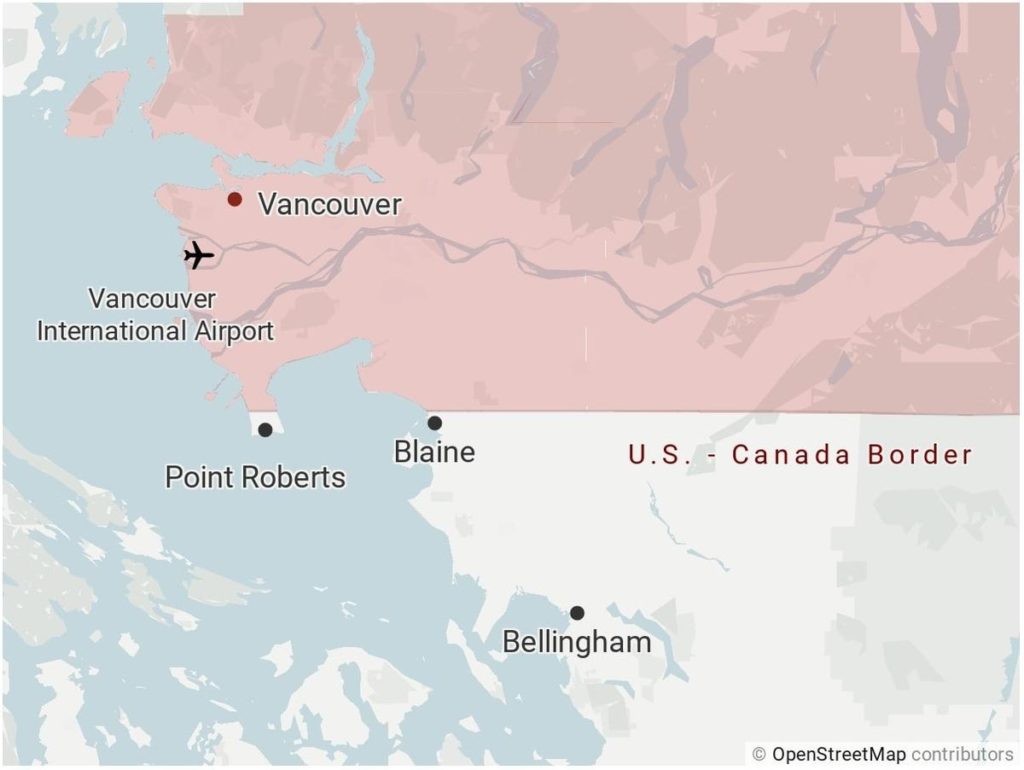 Congresswoman Suzan DelBene responded Tuesday by saying she would continue pushing both U.S. and Canadian officials to safely reopen the border. On Wednesday, she wrote Secretary of State Antony Blinken to ask that Point Roberts be granted an immediate exemption from current border crossing restrictions.

“This is unacceptable,” DelBene said in a tweet. “Point Roberts is a peninsula but the pandemic has made it an economic island. The U.S. & Canada must reopen the border for Point Roberts to avoid a worsening crisis.”

DelBene, Washington Sen. Patty Murray and other members of Congress from northern states have introduced measures to provide targeted economic relief to struggling businesses in border communities, but none of those bills have received committee hearings.

Point Roberts Chamber of Commerce President Brian Calder said community leaders have “begged and pleaded for help” from elected officials on both sides of the border for months on end, but every missive and petition fails to bring any change.

“I understand that Canada wants to ensure their residents are safe, but what I find so frustrating is that Point Roberts is not a threat to Canadians,” Calder said in a statement which described the peninsula as a contained community that “has been reduced to a ghost town.”

“Our fully-vaccinated rate is almost 85%,” said Calder. “I am certain there are very few communities who can claim this success.”

Point Roberts’ resident population has dwindled to below 1,000 people since the pandemic began, according to the best estimates of Calder and Carleton. In a normal summer, visitors and second home owners beckoned by the beaches, sea breezes, marina and golf course might swell the population to 5,000 or more.

Point Roberts is home to a handful of restaurants that are operating on limited hours and there is a gas station convenience store, none of which substitute for a supermarket. Along the northern border, commercial trucks, parcel services and specified categories of business travelers are allowed to cross the international boundary to facilitate trade and do things like resupply businesses and deliver packages.

Canadian leaders ranging from the premier of British Columbia, to the ambassador to the U.S., on up to Prime Minister Justin Trudeau have indicated they are aware of the strain on Point Roberts. But the avowed understanding has not translated into any exceptions for the small exclave.

During a news conference outside his Ottawa residence Tuesday, Trudeau indicated a gradual border opening was in the works “in the coming weeks.” But concern about possible spread of new vaccine-resistant coronavirus variants is providing grounds for caution.

“I understand how difficult this is and how frustrating this is for some people, but we know that reopening too quickly or carelessly would lead us to a resurgence that might well force us to go back into lockdown, to shut down the economy once again, and nobody wants that,” Trudeau said.

Last week, Trudeau said the border reopening would begin when 75% of eligible Canadians have received a first dose of COVID-19 vaccine and 20% are fully vaccinated, metrics that have now been achieved. Ministers in Trudeau’s government later elaborated on those remarks by specifying that 75% of Canadians should be “fully vaccinated” before permitting tourists and non-citizen business travelers to freely enter.

Earlier this week, the Public Health Agency of Canada announced a limited, initial step of easing up. Fully vaccinated Canadian citizens, residents and other individuals who already have a right to enter Canada — and who test negative for COVID-19 — will be exempt from two weeks of quarantine when returning to the country after July 5. This could be somewhat helpful to Point Roberts where a good number of local residents are dual citizens. But attempting to cross the border just to make a grocery run still seems likely to end in failure. 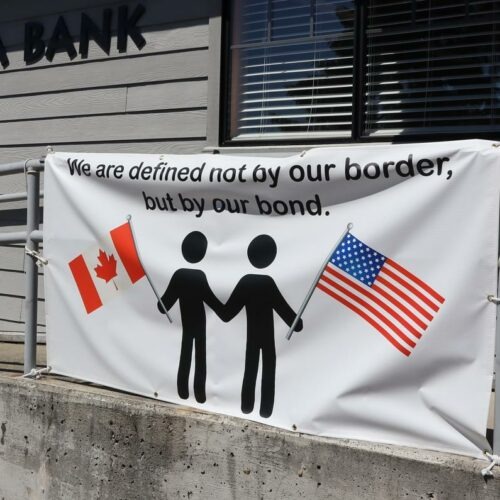 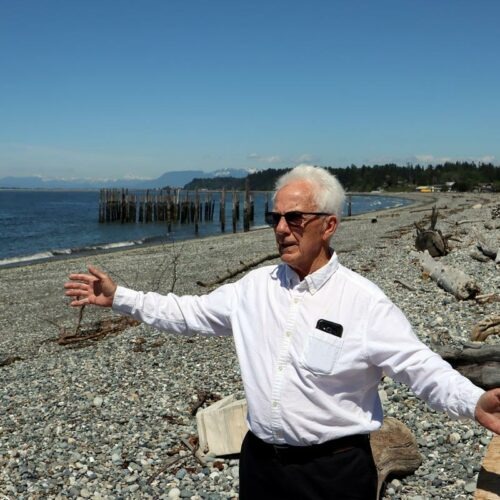 As the story of the COVID-19 vaccine in the Pacific Northwest changes from scarcity to surplus, one northwestern Washington community says it is in a unique position to extend a helping hand across the border. Continue Reading Hey, Canadians, Come Get A Shot, Proposes Small Washington Enclave Of Point Roberts, USA