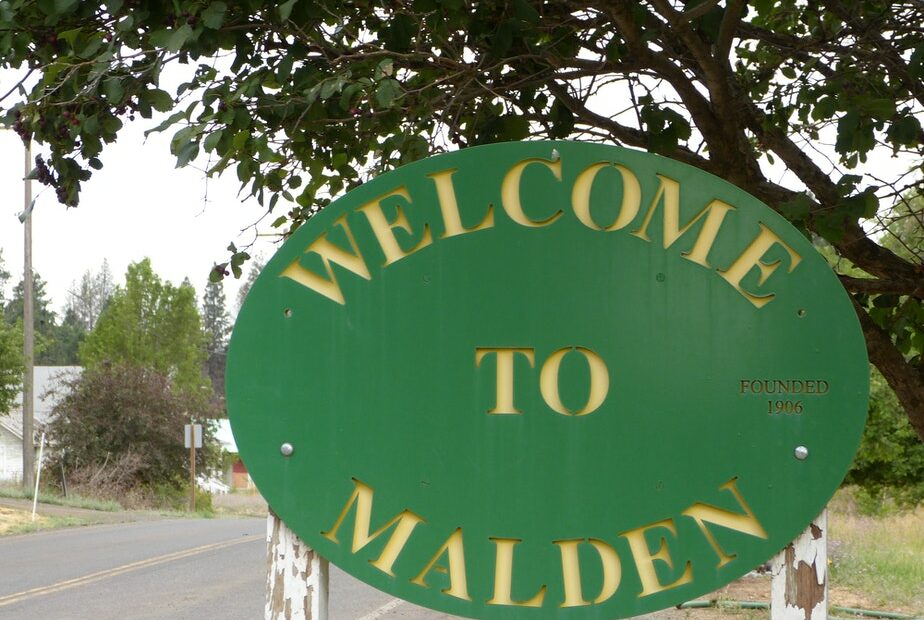 If you had to rebuild your town, where would you begin?

It’s a question that residents of Malden, Wash. have asked for months. One year later, this town’s struggle to rise from wildfire ashes continues.

The towns of Malden and Pine City burned to the ground on Labor Day 2020 — 85% of buildings were gone. Residents were displaced. And federal relief was delayed for months.

About 400 residents lived in the two small, adjoined towns tucked in the hills of the Palouse of eastern Washington.. Malden is the town proper in this area, and it saw near total destruction from this fire.

Hardly any firefighters were in the area on Labor Day.

“There were no trucks, no other response, because they were all fighting fires in other areas. It was that bad that day,” Malden Councilmember Scott Hokonson said.

When first responders and emergency management arrived on the scene, they looked for short term recovery solutions to move forward — shelter, food, and clothing.

Because most homes in the area are older, built when the railroad was the biggest industry in town, the area attracts those in search of wide open country and affordable craftsman housing. Many residents are on a fixed income, which means securities like fire insurance are out of reach. When the fire struck, they became completely dependent on outside help. A fire crisis quickly became a housing crisis. 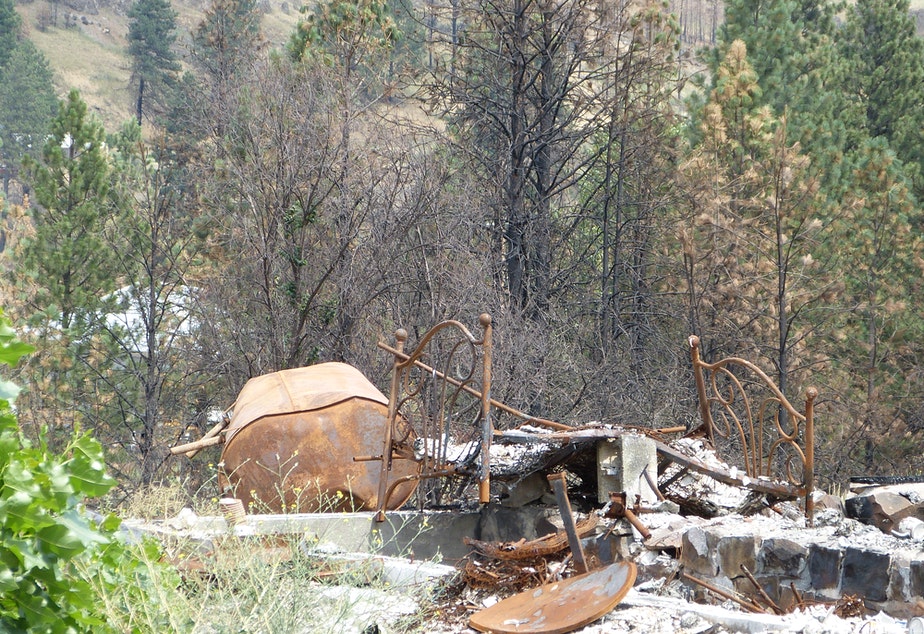 Nearly a week later, Gerry Bozarth, a Certified Emergency Manager for Spokane County, arrived on site. He specializes in disaster recovery and has responded to some of Washington’s worst crises. Bozarth was called in to help assist the overwhelmed emergency management team in Whitman County.

“I had never seen fire devastation with homes such as this,” he said.”It was very shocking.”

Bozarth and other first responders searched for temporary housing options, such as trailers, hotels, and family members in nearby Rosalia and Spokane. Any kind of help and aid came from outside of the Malden, Pine City area.

“There’s zero services in this town,” Bozarth said. “There’s nowhere to stay, you know, not like there’s a hotel down on the corner that you can stay in. You just walk over to your property to help clean it up, or whatever the case may be.”

Bozarth focused on immediate needs as every other aspect thereafter was painstakingly slow. Unexpected delays in federal aid kept some of the most critical recovery work from being done.

“We couldn’t even start the cleanup of the roadways,” Bozarth said. “There wasn’t any way for us to really begin to try to help these people become somewhat whole again.”

The extent of damage was so severe that the state determined the town would need federal resources if it was to make any kind of recovery. Governor Jay Inslee filed an emergency disaster declaration request, which if approved, would have unlocked funds and resources from FEMA. From there, only one person could sign and declare federal disaster assistance, then President Donald Trump.

One month turned into two; two months turned into five, and no decision was made on a declaration. The lack of an answer was especially difficult for residents. Without a “yes” or a “no,” there was no way to begin outreach for alternative funds or resources. Malden was in limbo, waiting on resources they were never sure they’d receive.

The Spokesman Review reported a personal dispute between President Trump and Governor Inslee as the primary reason for delay.

On February 4, two weeks after inauguration President Biden approved Governor Inslee’s request for aid to help local governments and tribes across Eastern Washington impacted by fires last year. President Biden denied an individual request for relief for Malden and Pine City after FEMA determined the fire in the area “was not of such severity and magnitude to warrant the designation.”

Digging through debris to rise from the ashes

These days, Diana Totten stands in remaining debris outside the town of Malden. She is assessing items in a pile of burned trees, rubble, and toxic waste from early 1900s construction.

In Malden, the initial steps to long term recovery begin with clearing debris and laying plans for new buildings in town. Many residents have found consistent work as part of this process. Totten monitors the debris trucks for 60-62 hours a week.

“It’s getting better day by day,” she said. 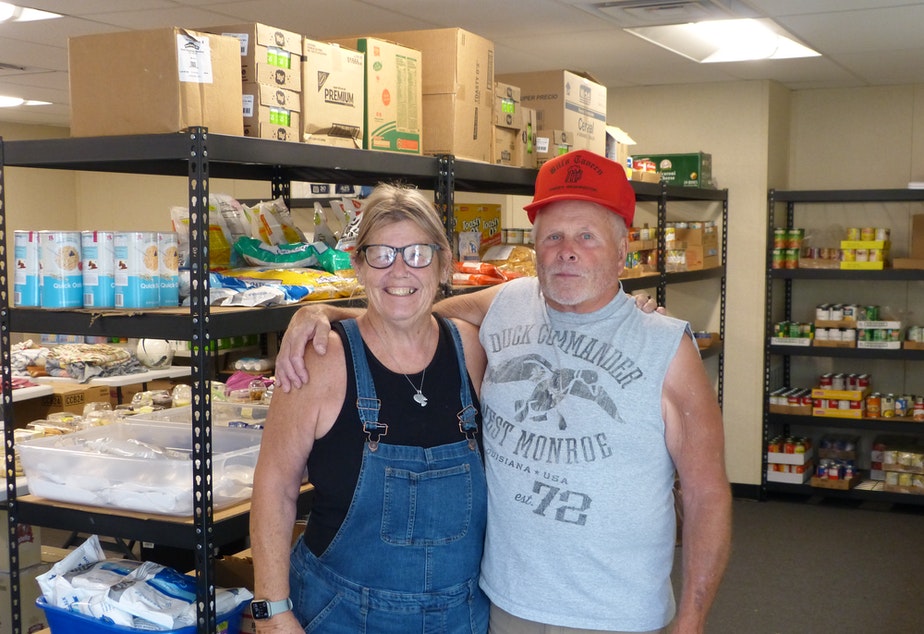 Totten has lived in Malden for the last decade. The day the wildfire swept through town, she was sleeping and the intense wind, which fueled the fire, woke her up. Fires aren’t uncommon here, so there wasn’t an initial alarm. After a few minutes her neighbor told her the town was evacuating.

Totten’s house burned down, and she lost everything

“I thought we’d be back,” she said. “The fire department is so good out here. You know? They get the fires out every year.”

Totten planned to return. She was optimistic for recovery.

“I started collecting material to build my own house,” she said.

But she didn’t need them. At this point in recovery, there haven’t been a lot of new fixtures, but two houses were built by a local Mennonite group for Malden residents. Diana was one of the two people chosen to receive one. 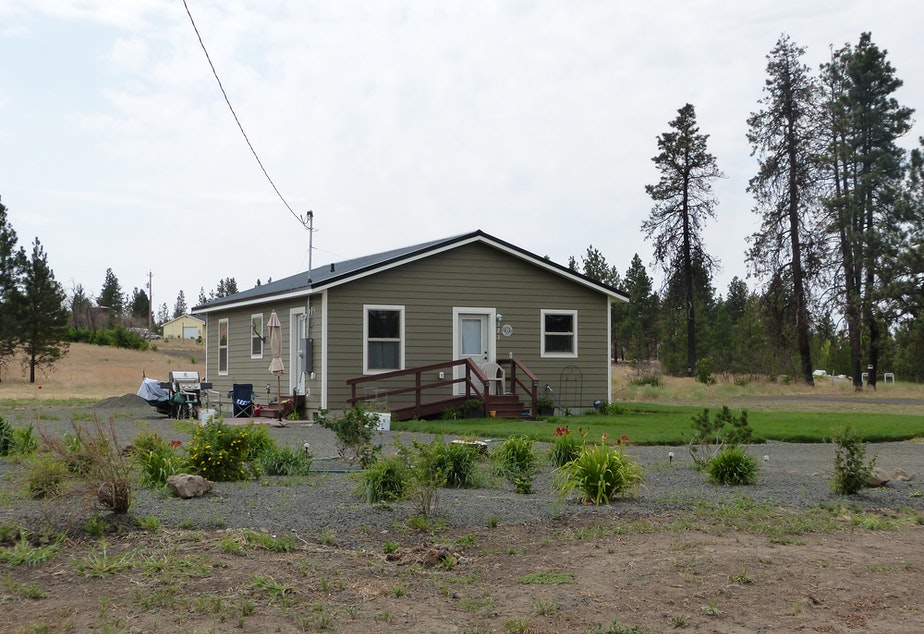 She ended up donating the materials she gathered to the town.

There’s one main road that goes through Malden. If you drive along the road you can see holes, scorched ground, and trailers sitting right next to where homes used to be. Town Councilmember Scott Hokonson lives along this road, his home is right in the center of one of the main residential areas.

“I moved here because of this view,” Hokonson said. “A craftsman home in the country, for maybe the price of a new Camry.”

But it’s been a year since the wildfire, and there are now “For Sale” signs. And new ones are cropping up frequently. Added to that the town is rebuilding in a place where fire is increasingly common.

Fire resistance in this town is key. All the new buildings in Malden will be made to be fire resistant, with metal roofs and smart, defensible landscaping. The community better understands how fire would move through town and where things went wrong. They have built new fire lines around town. The resources from recovery will rebuild a more protected and sustainable Malden.

“There is an opportunity after a disaster to make things better,” Gerry Bozarth says. 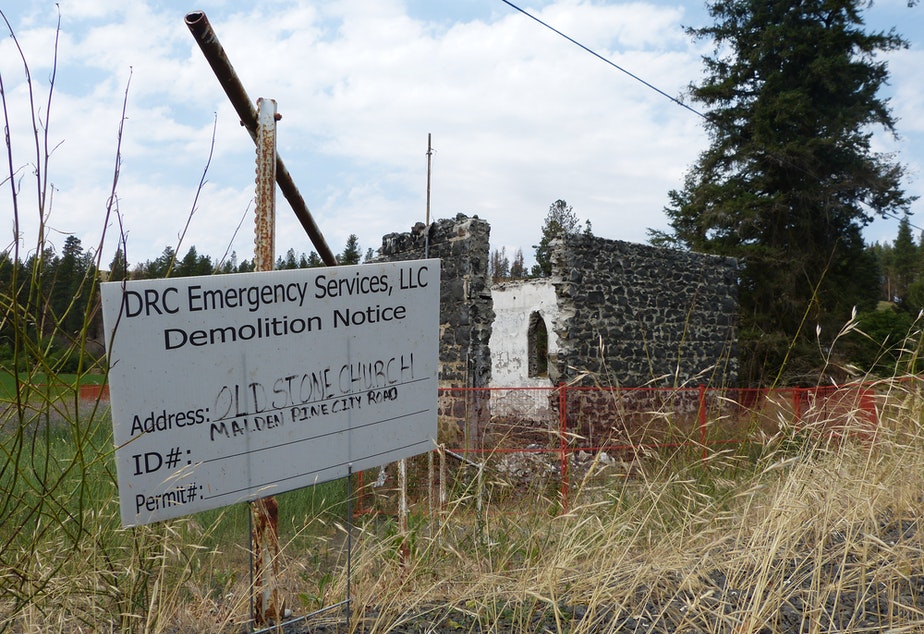 Pine City’s old stone church was destroyed in the fire. It served as a meeting place for residents and was built in the early years of the town. CREDIT: ALEC COWAN / KUOW