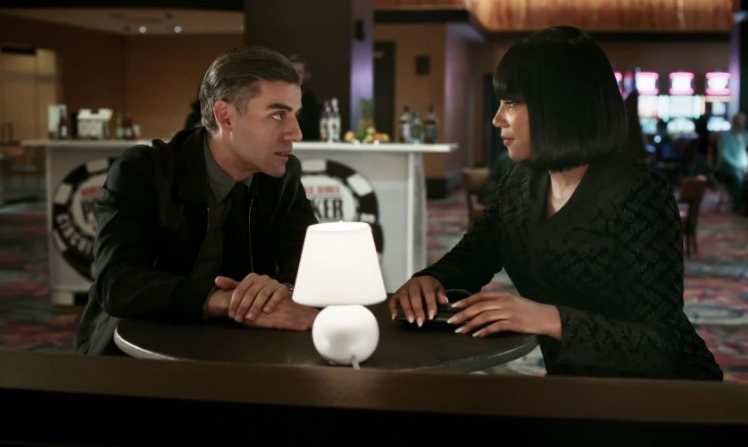 At this point, we can readily take Paul Schrader’s word for it: “Contradiction is the heart and soul of character and drama.” The eclectic and uncompromising filmmaker, who began his career more than forty years ago with gripping screenplays for Martin Scorsese (Taxi Driver, Raging Bull), has returned to familiar, disturbing ground with his latest picture, The Card Counter.

With Schrader, it usually comes back to his European idol, Robert Bresson, a master of minimalism. Schrader chose the French director (and his “man at the table” films) as the subject of his doctoral thesis, and he clearly identifies with Bresson’s obsession with moral ambiguity and the need for personal redemption.

Oscar Isaac brings an utterly convincing focus and discipline to the title character in The Card Counter. He plays William Tillich–he prefers to be called William Tell–a talented, itinerant poker player who travels around the country to minor tournaments with limited stakes. He stays in cheap motels and covers the furniture in white bedsheets to keep the rooms as consistently clean and generic as possible. You might describe his lifestyle as ascetic, because he has sins to expiate and demons to purge.  “A moral weight,” he tells us, “can never be lifted.”

Along the way, he intersects with three characters who change the rules of the game for him. First, La Linda, a manager of professional gamblers portrayed by Tiffany Haddish. She sees a winning potential in Tell, and he sees a possibility for a genuine human relationship–perhaps even love–with her.

Next, he meets Cirk (Tye Sheridan), the son of a fellow member of Tell’s army unit in Iraq. Even as the father committed suicide, the son lives for revenge.

Enter one of the director’s favorites, Willem Dafoe, who gave a fearless performance as a drug dealer in Schrader’s 1992 film, Light Sleeper. (A line from a song used in that movie appears in this one, tattooed across Tell’s back.) Here Dafoe plays Gordo, a retired U.S. Army major who supervised interrogation techniques at the infamous Abu Ghraib prison in Iraq. Convicted of torture for his own actions there, Tell has emerged from a decade behind bars as a changed but deeply troubled man. He now appreciates modesty, order and routine.

Schrader’s last movie, First Reformed, featured an award-worthy turn by Ethan Hawke as a small town minister grappling with faith and doubt, even as his soldier-son died in Iraq. It took an unexpected, sometimes surreal turn into the world of environmental degradation. In The Card Counter, the story pivots to an indictment of government corruption and officially sanctioned violence and inhumanity.

Cinematographer Alexander Dynan appropriately mutes the colors and employs garish, distorted wide shots inside the prison. Schrader’s script incorporates a diary and voice-over narration from the lead character (shades of several of his other movies) to emphasize the nature of his tortured soul. Alongside Isaac’s understated intensity, Haddish provides the only real glint of warmth to the story, and Sheridan goes from foil to friend as the story progresses. As for Dafoe, he embodies evil, without a hint of shame. His very presence anticipates an eruption of violence.

The Card Counter begins as a study in tactics at the card tables, but it morphs into a classic, existential morality tale. At 75, Paul Schrader is still exploring society’s demons through deeply personal stories. Robert Bresson would be proud.