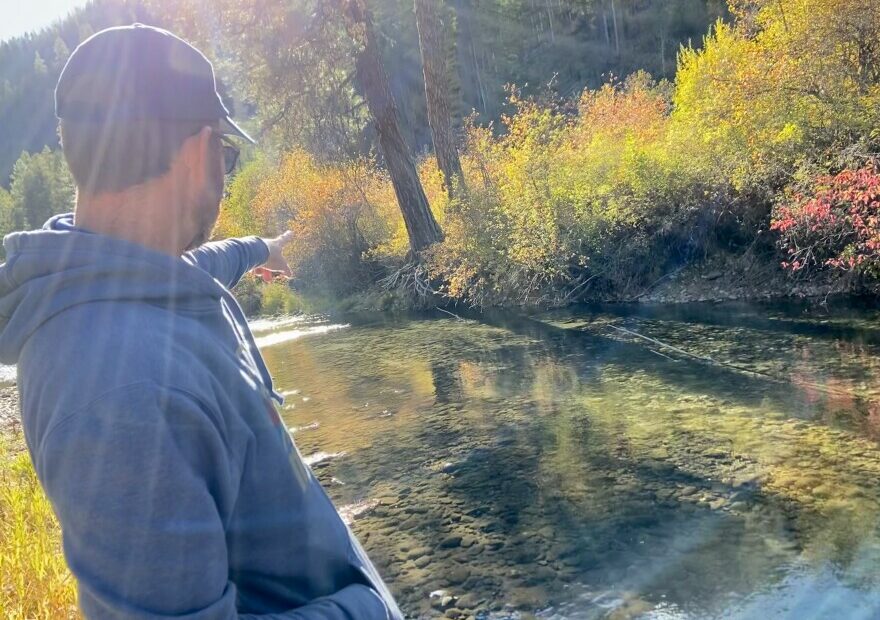 Salmon are now spawning in waters blocked by Grand Coulee Dam. It’s the start of a larger effort to reintroduce salmon into the blocked area.

A salmon splashes its tail in a shallow part of the Sanpoil River in an ancient ritual to build a nest, or redd. The salmon pushes lemon-sized pieces of gravel into a mound, burying the eggs underneath. 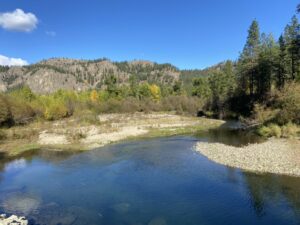 Salmon are building nests, or redds, on the Sanpoil River. The Confederated Tribes of the Colville Reservation trucked the salmon around Grand Coulee and Chief Joseph dams so that they could spawn in this blocked habitat. CREDIT: Courtney Flatt

In many other rivers in Washington, this is a normal sight. That’s not the case here, where massive concrete dams stopped salmon from reaching these spawning grounds for around 80 years.

Now, the salmon have made it to this area with the help of the Confederated Tribes of the Colville Reservation.

In the Sanpoil River, these salmon are a welcome, hopeful sight, said Casey Baldwin, a research scientist for the Colville Confederated Tribe Fish and Wildlife Department

“We want them to do what salmon do elsewhere. And, that’s what we’ve observed so far,” Baldwin said, watching the fish slosh back and forth as sunlight glints off the water.

Starting Oct. 4, Baldwin and his team walked these banks. They counted each redd and noted the positions on GPS. He said they hope to keep finding new redds through the end of October.

Of the Sanpoil habitat, Baldwin said, “We put them in here to see what they would do. We’re just trying to document that they can successfully spawn.”

Baldwin’s eyes easily spot the rocky mounds where each salmon can lay around 4,000 eggs typically in a single redd. He looks for clean piles where the fish have pushed large gravel on top of the mounds, creating nearby sandy stretches of river.

“In most rivers, it’s pretty easy to see,” Baldwin said. “Here you can tell each of these little patches of clean gravel represents one female’s redd. She digs a pit and then lays her eggs in it. Then digs upstream of that. Some fish put some gravel over top of the pit and bury the eggs under a thin layer of gravel for protection.”

“They’ll dig for days,” he said. “There were redds I counted last week that I saw this week, and now they are bigger, better. They’ve been working on it all week.”

Each redd illustrates just how well this cold-water river can support salmon life cycles, from nest to death. 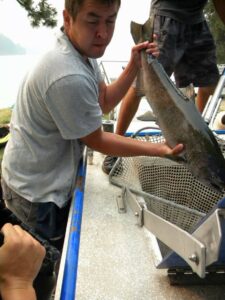 The Confederated Tribes of the Colville Reservation trucked salmon to Keller Park this August for a release ceremony. CREDIT: Colville Tribes Fish & Wildlife

Once the adult salmon spawn, they’ll die within a few days to weeks, Baldwin said. They become food for bears and birds, helping to further nourish this ecosystem.

This year, the Colville Tribe trucked 178 adult salmon to the Sanpoil River. The farthest release site was 135 miles from the Wells Hatchery, near Chelan.

Researchers looked for places they think could become good spawning habitat, areas with deep pools near shallower areas where the fish could build redds.

So far, the scientists appear to have picked good spawning spots.

Over the last two years, Baldwin said the adult salmon mostly stayed within one to two miles of where the tribe released them.

However, the juvenile salmon migrated out to sea, Baldwin said.

Researchers tag fish they catch in a trap near the mouth of the Sanpoil River. That way they can collect data as the salmon travel downstream.

“That’s the final proof that it worked and that their spawning was successful,” he said.

Since 2019, cultural and educational releases have marked the very beginning stages of a years-long process to bring salmon upstream of Chief Joseph and Grand Coulee dams, colloquially known as the blocked area.

The Upper Columbia United Tribes recently wrapped up Phase One of the reintroduction process. Now, the second phase of the study will include several pilot releases of chinook salmon and tests of interim passage facilities. The second phase could take at least 20 years to complete.

During that time, the Colville Tribe said it still plans to continue cultural and educational salmon releases in the blocked area. 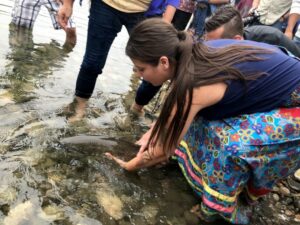 At the very first release above Chief Joseph Dam in 2019, people clapped and sang along with drummers as the first fish slid into the water.

“It’s a very sacred day for us to see fish back up in the upper part of the Columbia again,” said Rodney Cawston, Colville tribal chairman, at the ceremony. “This is where they need to be. They need to come home.”

Michelle Campobasso, spokesperson for the tribe, said the release ceremonies have shrunk during the pandemic. She said she hopes the jubilant release celebrations return soon. 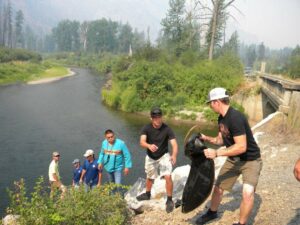 People help carry a salmon to the Sanpoil River at a release at Keller Park this August. CREDIT: Colville Tribes Fish & Wildlife

The first time the tribe released salmon in 2019 at Keller Park on the Sanpoil River, Campobasso said, the whole town showed up.

This August, in a video posted to the Fish and Wildlife Department’s Facebook page, fish splash in the hatchery truck before a handler places them in a modified rubber tire inner tube called a boot.

A line of people gently and quietly pass the tube from the truck to the water on the banks of Keller Park. This year, the tribe released 59 salmon at Keller Park and another 107 into Rufus Woods Lake, behind Chief Joseph Dam.

For Campobasso, the salmon releases into the Sanpoil took on extra meaning. As a child, she said she spent time with her grandparents fishing for trout in these waters, not far from the salmon redds now piled in the river.

“All along from West Fork near my grandparents’ house up to Keller. This is where we’d fish all along these bridges,” Campobasso said. “Our grandparents never saw salmon. Well, maybe when they were little. This is amazing.”

During this summer’s heatwave, the Sanpoil River was cooler than the Okanogan River, where summer chinook typically do well, Baldwin said.

“Part of the reason that we brought the fish this far up the Sanpoil, as opposed to releasing them down closer to the mouth, was temperature,” Baldwin said. “With the cool nights, this river cools off pretty quick at night.”

Before the tribe brings salmon into the blocked area, researchers test the fish for viruses. Some common viruses in the Lower Columbia are rare above Chief Joseph Dam because salmon were kept from these waters for so long.

So far, Baldwin said, salmon the tribe released into Lake Roosevelt, behind Grand Coulee Dam, haven’t easily made their way to the well-suited spawning waters on the Sanpoil. Instead, the tribe trucked adults to the river.

However, the salmon born in this river should be able to find their way back after they’ve migrated out to the ocean and back inland. That is, he said, if researchers can find the salmon and transport them around Grand Coulee and Chief Joseph dams.

“The hard part for us is going to be finding those salmon. They’re going to be a needle in the haystack below Chief Joe. We’re going to try to find them,” Baldwin said.

“It would be nice if we can find the offspring of these fish and bring them up here,” Baldwin said. “But, ultimately, the objective is to reconnect the people with the fish and the fish with the habitat – to make some incremental steps.”