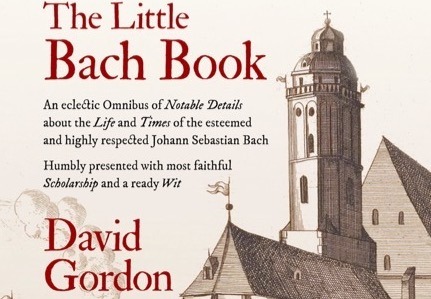 There’s a recipe for just this baroque-era staple included in The Little Bach Book by the Oregon-based tenor, Bach specialist and book designer David Gordon (Lucky Valley Press, 2017). Only 160 pages, including maps, glossary, timeline, recommendations for further reading and, yes, recipes, Gordon’s little book reveals the magnificent Johann Sebastian Bach as a man of his time, a hardworking family man whose daily life included a great deal of beer.

As long as he was learning Bach’s music, Gordon figured, he might as well learn what kind of world this music was created in.

It was a world where drinking water could make you sick, but you could be safe with beer. The beverage was served at every meal, its low but steady alcohol content keeping the water-borne bacteria at bay. Gordon figures that Bach’s busy household went through nearly 300 gallons every year.

As for that soup? Like all good home cooking, it’s a recipe for using up leftovers. Those unrefrigerated, open containers of the family’s favorite drink went flat quickly.

Two soups for you, from The Little Bach Book by David Gordon. Used by permission.

Brown 2T flour in 3T butter. Blend in 1quart flat beer. For a sweet breakfast soup, add a small piece of cinnamon stick and a bit of sugar. Bring mixture to a simmer and stir until a bit thickened. Remove from heat. Whisk together 2 egg yolks and ½ cup fresh cream or sour cream. Stir into the hot beer. Commonly eaten with chunks of bread submerged in the soup. Says author David Gordon, “We had fun trying all the recipes, and the beer soup was surprisingly delicious.” There are many versions of beer soup, he writes, but this is the basic concept.

Chop ½ cup shelled almonds finely, and simmer in one quart of milk with a bit of sugar. Let cool slightly. Beat two egg yolks with a small amount of butter, and stir the mixture rapidly into the milk until the liquid is foamy. [In another pan] chop bread into cubes, toss in butter, and toast lightly. Sprinkle over the soup. For a sweeter effect, the bread cubes can be tossed with sugar and caramelized in butter in a hot pan.