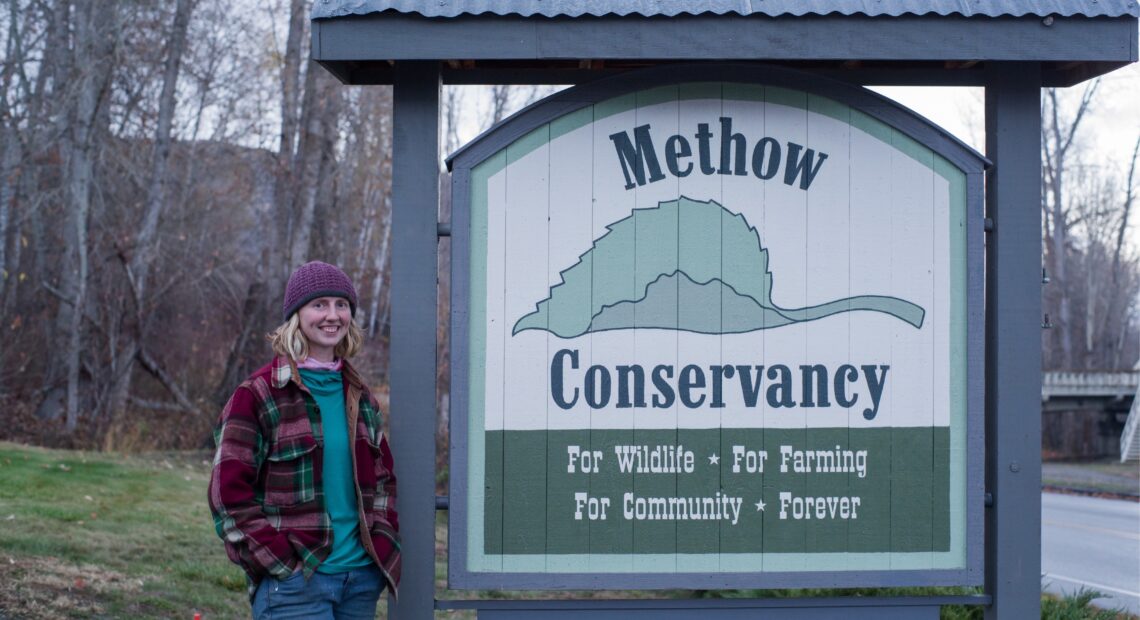 How Conservation Is Preserving A Community

Connor Henricksen reports on how conservation efforts in one Washington town may be preserving more than the land and the environment / Runtime – 4:17

Conservation has a long history in the Northwest. Most of the time it’s about saving the environment, but in some areas it can also preserve communities.

It’s a chilly, gloomy day in Winthrop. The Methow River roars in the distance.

I’m here to meet with Johnnie Duguay-Smith. She’s the stewardship associate at Methow Conservancy, and a childhood friend.

“My role at the Methow Conservancy is to monitor all of our conservation easement properties every year,” says Duguay-Smith.

The conservation easements Johnnie is talking about limit what can happen on certain plots of land. In the Methow that usually means preserving areas as wild space or for agricultural use.

“We preserve quite a variety of landscapes,” she says. “Everything from agricultural lands to great riparian habitat, upland habitat, shrubstep…”

The land up here is gorgeous and as a result the valley has long been a vacation destination for people west of the Cascades, sometimes as far away as California. ‘Coasties’ for short. They spend a lot of money buying land and building houses in the area.

All that development means the land itself is expensive, so it’s tempting for some agriculturists to cash out. That’s where the Conservancy steps in and gives them an alternative. A lot of times that means money in return for restrictions on land use.

“A lot of times we’re compensating the private landowners for basically what they otherwise lost because they’re definitely giving up development rights,” she says. “And some of them are purely donated by the landowners, but a lot of times landowners receive compensation, and it can help people stay on the land that in some cases their families have farmed for a long time.”

One person determined to stay on the land is Craig Boesel, a rancher. Johnnie shows me a brief overview of his land in a thick binder.

“Craig’s conservation easement it’s about 60 acres and most of it is farmland, like, this is the ag zone and there’s also a riparian habitat conservation zone,” Duguay-Smith says. “Each of those different zones have different activities that are allowed or not allowed.”

After that overview we headed to meet Craig on that land just south of Winthrop. He’s been interested in conservation since the early ‘90s. He was worried about his sons being priced out of the Methow.

“In the 90s, I would have been raising four little boys. I thought I was blessed to have the opportunity to do that in this community,” Boesel says. “And I wasn’t sure that there was going to be a way for any of them if they wanted to do it to be available to do that, unless somehow we preserve that opportunity, which would be some of us saying, Okay, we are just not going to develop our land. We just aren’t going to allow it. And how we’re going to do that is we’re going to put a conservation easement on it before we pass away, that people can’t change.” 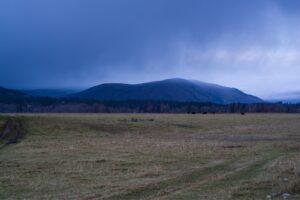 So he did it. It took some time to put his plan in action, but the plot we visited him on has been protected since 1998.

Taking that step wasn’t an easy choice. It still isn’t. Landowners can add a lot of zeros to their bank accounts by selling to developers.

“Land is so expensive that it is really a challenge for some of us to say, you know, do I want to put a conservation easement where you cannot put houses on it, or do we just want to have a few hundred acres here, and we’re just going to put it in lots,” he says. “One is worth this and the other is worth 10 million. That can truly test our belief in what we think is a priority.”

The terms of the easement can be changed in the future, but those changes have to be approved by the Methow Conservancy. That means splitting the land into housing parcels is off the table.

The Biden administration wants to start a federal land conservation program as part of the America the Beautiful initiative. The current framework relies heavily on easements with private landowners. The future of that plan is uncertain and even if it gets off the ground it could be a hard sell. These easements are largely built on trust, something that the federal government is short on in many communities.

“Some agriculturists are pretty territorial,” he says. “Having other people have some kind of input and say ‘okay we’re going to monitor your land every year’ or something, they’re going to say ‘I don’t think so.’ So it does, I believe, need to entertain a considerable amount of trust.”

Even if no federal program pans out, the Methow Conservancy and people like Craig Boesel will continue to preserve land and community they love.