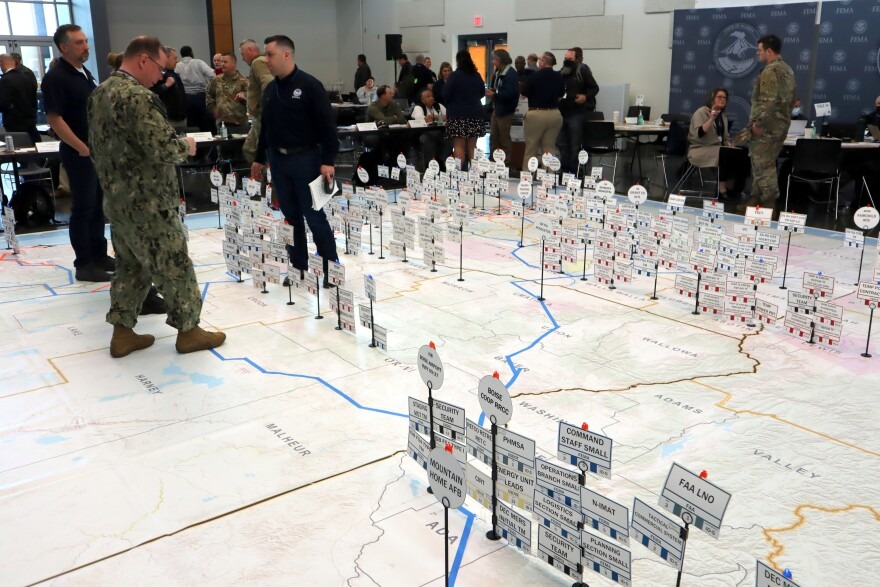 Close to 200 federal, state and tribal emergency preparedness planners gathered around a giant map of the Pacific Northwest this week to rehearse and critique the federal response plan for “The Big One.” The three-day Cascadia earthquake discussion exercise partially replaced a much bigger planned dress rehearsal that was canceled due to the coronavirus pandemic.

Either way, the scenario was the same: a Magnitude 9.0 full rip of the offshore Cascadia fault zone followed by a tsunami. The exercise assumed “lots and lots of destruction” in Western Oregon and Washington, including blockages on Interstate 5 and buckled highways to the east.

The disaster response exercise at the Washington National Guard’s Camp Murray near Tacoma resembled something out of a war games movie or a giant game of Risk. Planners moved stanchions representing resources such as search and rescue, security and air support across a basketball court-sized map of Oregon, Washington and Idaho.

“We’ve got the experts down there right now talking about what’s real, how long it’s going to take, what roads may be available, what’s not available,” said FEMA Regional Administrator Willie Nunn, looking down on the exercise from an overhead balcony.

Nunn said walking through the earthquake and tsunami response in detail, technically known as a “Rehearsal of Concept,” should yield learnings that will be incorporated into an updated federal Cascadia Subduction Zone plan.

“What we’re doing right now is critical,” Nunn said. “Our priority is lifesaving and life sustaining, as always. But we also have got to enable recovery. So, we’re going to have to make hard decisions.”

The exercise reinforced for Oregon Office of Emergency Management Director Andrew Phelps how long it might take for quake relief to reach people in disaster-stricken parts of Oregon and Washington state. He said residents should prepare to be self-sufficient for at least a week, if not two or three weeks.

The 2022 edition of Cascadia Rising would have built upon lessons learned from an initial full-scale Cascadia Rising drill held in 2016. That exercise exposed serious gaps in communication interoperability, sustainment in the absence of fuel supplies and electricity and relief supply ordering and dispatch problems.

“It really became crystal clear that much of the Cascadia response is going to be a huge logistics challenge,” Washington Emergency Management Division Director Robert Ezelle said at a media briefing Wednesday. “How do we move critical supplies from the rest of the country into the impacted area?”

“That’s a lot of what we are working on,” Ezelle said. State emergency management agencies and interested nonprofits are planning their own exercises next month in place of the full-scale, regionwide drill.

Ezelle said the COVID-19 pandemic response gave emergency managers another type of stress test that could strengthen the response to a catastrophic earthquake. He specifically mentioned improved coordination between state and federal agencies and more practice than anyone could have wished for using virtual meeting software, such as Microsoft Teams.

Geologists and emergency planners consider the Cascadia Subduction Zone fault among the most significant disaster threats in the U.S. The offshore fault last ruptured in January 1700, spawning a tsunami that reached all the way across the Pacific to Japan.

Researchers digging in coastal marshes and offshore canyon bottoms have also found evidence of earlier great earthquakes and tsunamis. The radiocarbon dating of those events makes it possible to estimate the recurrence interval of Cascadia megaquakes at between 250 to 800 years. That puts the present day well within the return window.