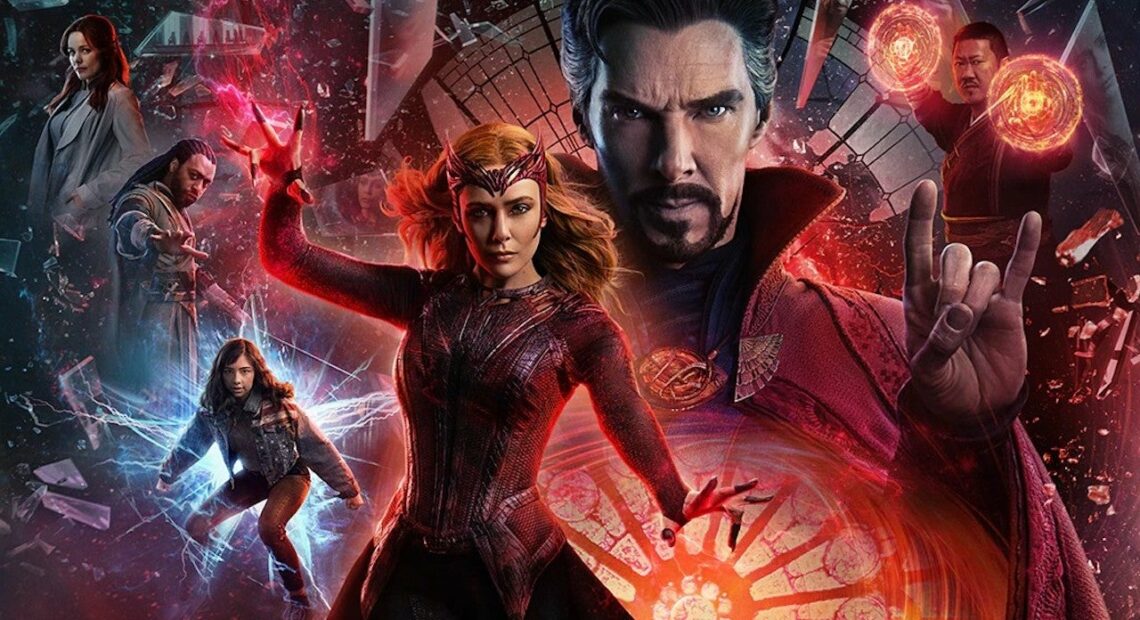 The MCU (Marvel Cinematic Universe) made its debut fourteen years ago this month, as a glib and charismatic Robert Downey, Jr. established his superhero credentials as Iron Man. That universe has expanded steadily ever since, although in ways that could easily elude the geometrically challenged.

In this latest big-screen installment, Benedict Cumberbatch returns as Doctor Stephen Strange, the sorcerer–not really a wizard, as he points out–with the eloquent and powerful hands, the Sling Ring and Cloak of Levitation. With the deaths (plural) of the supervillain Thanos in Avengers: Endgame (2019), Strange now faces new challenges. One comes from the Illuminati, the council which accuses him of misusing their Darkhold (Book of the Damned) to bring about a universe-destroying “incursion.” The other, more immediate, threat comes from Wanda Maximoff (aka The Scarlet Witch), fresh from her very clever and well-received TV incarnation in WandaVision.

The story begins with the Doctor dreaming of the wedding of his fellow surgeon and erstwhile love Christine Palmer (Rachel McAdams) to another man, only to have Gargantos, a monstrous, one-eyed octopus bring him back to his heroic senses. Wanda (Elizabeth Olsen) has unleashed this awful menace as a manifestation of her frustration and grief over the disintegration of her twin boys in the not-so-idyllic town of Westfield, New Jersey. She and the demons at her beck and call also want to capture America Chavez (played by Xochitl Gomez), a bilingual teenager with an LGBTQ+ pride pin and the ability to punch open doorways and travel between various dimensions. Strange and America get timely support from Wong, Master of the Mystic Arts (Benedict Wong), and Wanda finds common cause with Baron Mordo (Chiwetel Ejiofor), a former sorcerer-ally of Strange since disillusioned by his flouting the laws of nature.

Olsen, so good in WandaVision with its sitcom tropes and homages, has too little narrative space here. She grieves for her kids and unleashes demons. Cumberbatch, ever the intelligent presence on screen, embodies alternative versions of Strange and demonstrates his magical repertoire (on more than one “earth,” no less). However, their characters lack sufficient emotional depth, and the entire cast gets saddled with an excess of banal dialogue. (“America doesn’t have long” and “Get the hell out of my universe” come readily to mind.) The movie ultimately registers as a placeholder in what has become Phase Four of the MCU.

With so much discussion of the “multiverse,” it’s worth noting that philosopher William James actually coined the word back in 1895, referring to natural phenomena. Kudos to Raimi and his team for one of the visual high points of this latest Doctor Strange, in which the protagonist and the spunky America tumble through many dimensions of it in an impressive display of pacing, framing and editing. Yes, we even get an honest-to-goodness tempest in a teacup. Editor Bob Murawski (a deserving Academy Award winner for The Hurt Locker) also contributes laudable work in Wanda’s dreamwalking scene and Strange’s wonderful battle of musical notes.

Doctor Strange in the Multiverse of Madness incorporates all three of those elements: doctor, multiverse and madness. It dabbles in horror, as well as magic. It features a strong, if underused, cast. Even at that, if you’re a Marvel fan, you’re much more likely to appreciate the visual and aural virtuosity than any narrative cohesion. Of course, you can always live for the end credits and the next MCU release to see how all of these plots and shapes fit, geometrically.