Storing renewable energy is critical in the Northwest. A draft review for the region’s largest proposed energy storage project is available for public comment.

More than 2,400 feet above the Columbia River, high atop Goodnoe Hills in south central Washington, a reservoir could one day cover 61-acres of this private land. Right now, cows graze underneath wind turbines, which gently swoosh overhead.

Down below, nearly at river level, a second 63-acre reservoir could one day stretch across a small section of a former aluminum smelter site. Developers plan to clean up the area, which is filled with contaminated material the smelter dumped.

These two reservoirs would be connected by concrete- or steel-lined tunnels that would be burrowed into the sloped hillside, said Erik Steimle, vice president of Rye Development, which is developing the energy storage project.

This setup, known as a pumped storage project, will be key to implementing the Northwest’s renewable energy goals, Steimle said. These energy storage projects act as batteries, saving excess power for times when the sun isn’t shining or the wind isn’t blowing.

If built, the Goldendale Energy Storage Project would be the largest pumped storage project in the Northwest, providing up to 1,200 megawatts on-demand, the equivalent of 12-hours of electricity for residents in a city the size of Seattle, Steimle said.

In addition, the Goldendate project would make up one-fifth of the region’s need for energy storage, he said.

To work, the project would store energy when there is excess power on the grid. The pumped storage project would act like a battery, using the natural geography of the cliffs.

First, the project would pump water from the lower reservoir into the higher reservoir when there is excess power on the grid, such as when there’s a lot of spring snowmelt flowing through dams and a lot of wind spinning turbine blades. 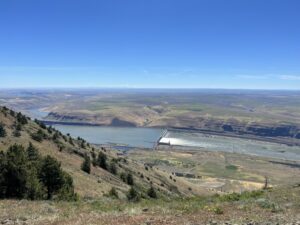 A view from the edge of the cliff where the Goldendale Energy Storage Project could be built. An underground tunnel would carry water from a upper reservoir to a reservoir down below. CREDIT: Courtney Flatt

Once water is pumped to the upper reservoir, the water would sit in there until more power is needed, such as when people come home from work. At that time, there’s a spike in the demand, with people cooking dinner and turning on the air conditioning.

That’s when the water in the upper reservoir could be released downhill, traveling through a powerhouse and turbines, into the lower reservoir.

To get the facility to full generation would take less than four minutes, Steimle said.

“This is more like a day that we would typically see in April,” Stiemle said at the project tour June 22. “When the hydro facilities on the Columbia are operating at a full rate, it can be difficult for the wind to fully deliver its generation into the system.”

Moreover, Steimle said, the pumped storage project has a 100-year lifespan, which could help balance the grid long-term.

“This is a low cost way of aggregating all this wind and solar for generations,” Steimle said.

Long-term and shorter impacts of the pumped storage project are currently under review.

A new draft environmental impact statement from the Washington Department of Ecology is out now. The draft statement examines potential environmental effects of the project and its construction. The public can comment on the draft EIS through Aug. 9. The final online zoom session about the draft EIS will be at 10 a.m. June 30. The public also can submit comments online.

Around 60 people attended a public hearing June 28 in Goldendale, said Ryan Miller, communications manager with the Washington Department of Ecology. At that meeting, officials heard around 25 oral public comments, which all supported the project.

The final environmental impact statement, which is expected later this year, will guide future permits for the pumped storage project. The project will need federal, state and Klickitat County permits.

In the draft statement, the Department of Ecology noted significant impacts to wildlife and tribal cultural resources.

The department proposed measures to lessen potential problems for wildlife, including birds of conservation concern, such as the rufous hummingbird and sage thrasher. In addition, other species could face impacts from the project, including golden and bald eagles; ferruginous hawks, which are endangered in Washington; little brown bats, which are a priority species in Washington; and Western gray squirrels, which are threatened in Washington.

The tribal cultural damage also would be significant and unavoidable, according to the draft statement.

In an earlier story from Northwest News Network, tribal members called the cultural losses irreversible and an environmental injustice.

The Goodnoe Hills, known as Put-a-lish, is where the Ka-milt-pah people survived the Ice Age Floods nearly 15,000 years ago, said Elaine Harvey, a Ka-milt-pah member, known in English as the Rock Creek Band of the Yakama Nation.

“This whole area is really sacred from the bottom all the way to the top,” Harvey said.

Moreover, the project would be built on top of important traditional gathering sites for berries, roots and medicinal plants, Harvey said.

According to the draft environmental impact statement, “Restrictions to access and removal of areas used for cultural practices will indirectly affect entire tribal communities and multiple generations.”

The Washington State Department of Archeology and Historic Preservation estimates 15 archeological sites could be disturbed during construction, according to the draft statement.

“The study area was intensively used in the past, and this use is reflected by a dense concentration of archaeological sites,” according to the draft statement.

The culturally sacred area is something Rye Development has taken into consideration, Steimle said.

“We worked with the tribes to hire their own staff to do cultural resource survey work, ethnographic survey work in our project area,” he said. “It’s important to understand that tribal nations need to be heard. They’re an important part of the process.”

Consultation between the tribal governments and the federal government is ongoing, Steimle said.

“We’re more listeners in that process,” he said.

Solutions aren’t so easy as moving the project to another location in the Columbia Gorge, Steimle said. Numerous studies have found this site makes the perfect place for a pumped storage project. It just hasn’t been feasible until now, he said.

“From an engineering standpoint, this is one of the best pumped storage sites in North America. It’s been studied since the 1970s,” Steimle said.

The difference now, he said, is that Rye Development’s proposal is more environmentally friendly. This proposal removes the largest amount of water from the Columbia River once, while earlier studies looked at open-looped systems, which would have filled the upper reservoir with water from the river every time.

The energy storage project would be built near an existing wind facility, which means minimal road construction to get to the upper reservoir, Steimle said.

Many construction impacts have already happened at the site, he said, which makes it less harmful to build at this site.

In addition, he said, the project would be built near a Bonneville Power Administration transmission infrastructure. Project developers would add an additional transmission line across the Columbia River that would hook into the John Day Substation in Sherman County, Oregon.

“We don’t have to build a lot of new unsightly transmission to build a massive storage project for Washingtonians to integrate renewable resources like this,” Steimle said.

Moreover, he said, the project would purchase existing water rights from the Klickitat Public Utility District.

Other concerns addressed in the draft environmental impact statement include minimal potential changes to how the area looks. Once built, the lower pool would be visible from Washington Highway 14, he said.

According to the draft statement, aquatic species in the Columbia River likely would not be affected.

For this project, water would be drawn from the Columbia River, a one-time withdrawal that would use water rights from the Klickitat Public Utility District, as would subsequent smaller withdrawals to account for evaporation and leaks, Steimle said.

According to the draft statement, initially filling the pools would take around six months.

The lower reservoir would be built on a part of former aluminum smelter site, to the left of the trees. CREDIT: Courtney Flatt

The lower reservoir would be built on the west surface impoundment lot of the old Columbia Gorge Aluminum smelter, which closed in 2003. Steimle said Rye Development would remove the contaminated materials, including sludge from the aluminum smelter and paving cleanup. The cleanup also would include soil underneath the site.

“It’s not an area that had some of the historical contamination that’s more concerning,” Steimle said. “It was essentially a garbage dump for the aluminum smelter. So old cars, other parts, that kind of thing were buried there over decades.”

Contractors would dispose of all the contaminated material, he said.

With both of the storage reservoirs and the tunnel between, the Goldendale Energy Storage Project would take up much less space than any other renewable energy project that could generate the same amount of energy, he said.

If all the permits get approved, construction is expected to last around five years. The pumped storage facility is expected to be fully operational in 2028.

These types of projects will be necessary as more renewable energy comes online and the world transitions off fossil fuels that contribute to climate change, Steimle said.