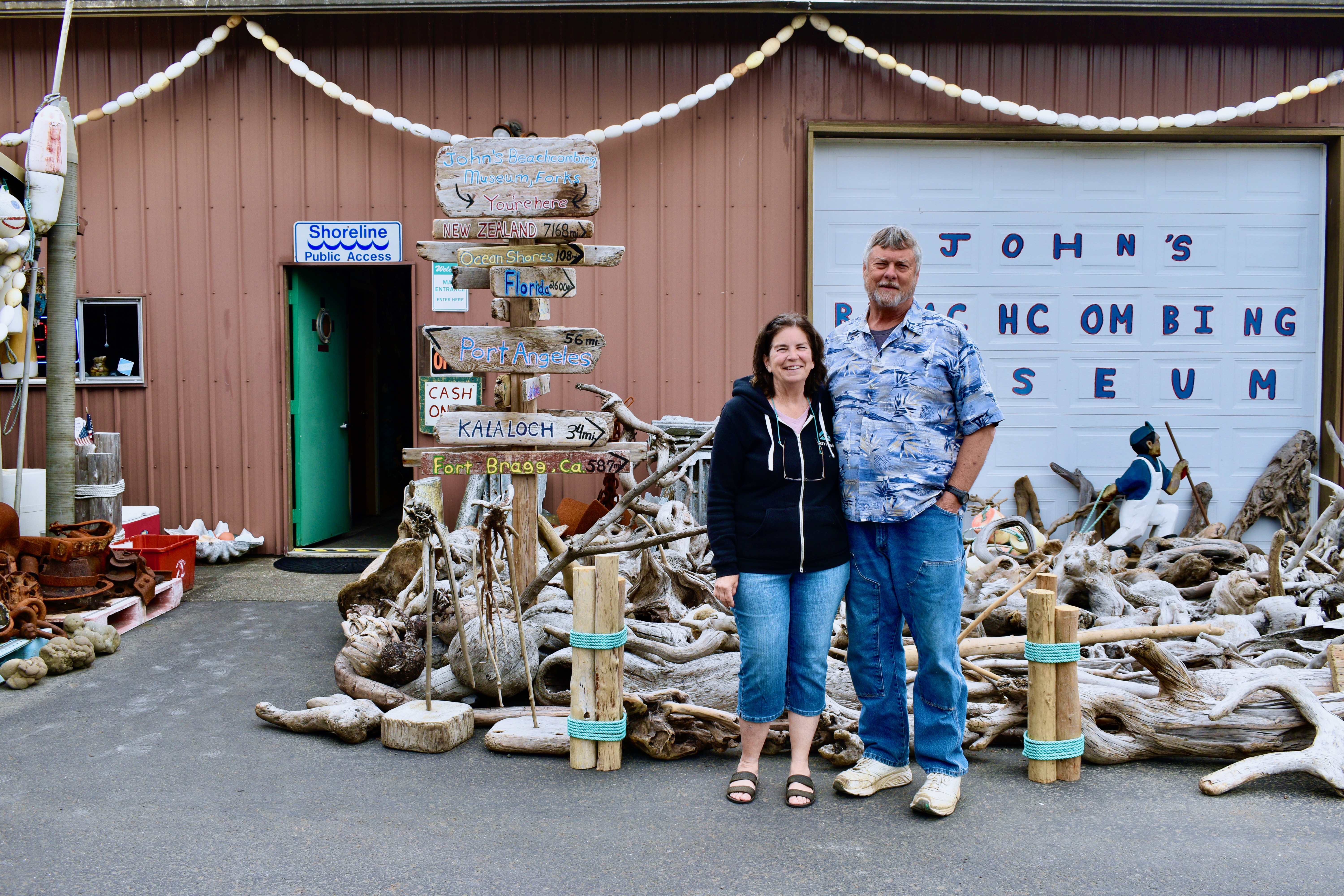 Deep, dark, and mysterious. Most people think that whatever falls into the ocean is lost forever, but not John Anderson.

Born and raised in Forks, he spends a lot of time walking the beaches of the Olympic peninsula. When he was 22, he picked up the Holy Grail of beachcombing, a Japanese glass float – that started his extensive collection.

“And that’s what most people go beachcombing for is glass floats because they look cool, they’re collectible. It’s amazing they survive washing over and washing up on the beaches and not get broken.”

The Japanese glass float is an iconic piece of flotsam. Round glass bubbles that come in all different colors and sizes, usually wrapped in rope. Anybody who has been to a coastal town knows what these look like. John says they aren’t that common to find these days because they stopped making them around the late 60’s and early 70’s. John has hundreds of them, because he has been scouring the beach for nearly 50 years. He has some pretty rare ones too. His most prized possession is a dumbbell shaped float.

A retired plumber, John has been beachcombing since the 70’s. In his Hawaiian shirt, shorts and sandals, he has big Margaritaville vibes. In certain circles he is known as the world’s greatest beachcomber.

Chains from medieval ships, parts of space probes, dozens of Nike shoes from the shoe spill of 1990, hundreds of bottles of Suntory whiskey, 1000s of rubber buoys–which he turns into sculptures that can only be described as monuments. There are millions of lost—now found—items in his plumbing shop, which he converted into a museum. The museum opened in the mid-2010s to the public, like a shrine to the sea.

“My first favorite thing that I found was a fossilized mammoth tooth from the Pleistocene era. I didn’t know what it was University of Washington IDed and dated it for me…. It probably washed out of the bank there and was laying on the beach, getting kicked around with the rocks. And then the weirdest thing I found is a snake in a sake bottle.”

He doesn’t use a metal detector when he goes beachcombing, just his eyes. He takes whatever he can fit into his backpack. But there’s some treasures too large.

“Well, I found a part turned out to be center spinner cone from the Boeing 727 jet engine.”

He’s also found boats and pallets that fall off cargo ships. For the stuff that doesn’t fit in his backpack, he puts it in his truck. For the really big stuff, he flies it out with a helicopter.

“Back in the day, I had a friend with a helicopter he would fly stuff off for me, and I used to be a volunteer with the park service when I was a young man and I would coordinate a plane up on a section of beach that I had something really big on or a big stash of buoys on, get it all flown off.”

On the drive into the museum are thousands of rubber buoys lining the driveway. There are all different colors and sizes. Some have Japanese writing on them. In fact, many of the items he finds come from Japan. He says that’s because the currents of the Pacific Ocean bring stuff from the eastern hemisphere to the western hemisphere. He also uses the buoys to build his huge sculptural installations.

When you into the museum you are greeted by John or his wife. It costs a few dollars to get in. You’ll see the driftwood sculptures made by his wife, Deb. He met her the same year he started beachcombing.

Turn to your right and you will see a floor to ceiling wall stacked with Suntory whiskey bottles. He says he has so many of these because Suntory was a favored brand among Japanese sailors, and the tradition among these sailors after enjoying the whiskey was to leave the very last drink in the bottle and throw it overboard for the ocean.

Facing the whiskey wall, on the right you will see the purple starfish John made. It’s made from water bottles, five-gallon jugs, ropes, etc. and painted purple. Pieces like this make you imagine how much plastic this man has scooped out of our oceans.

There’s an exhibit on the 2011 Japanese Tsunami. In March of that year a huge earthquake sent a tsunami crashing into the Japanese coast, engulfing nearly one hundred cities, and pulled millions of tons of debris into the ocean. Nearly a year later, the ocean currents carried them to the Washington coast.

Here you can see a poster for the documentary Lost & Found, about the tsunami. John’s hands are holding the volleyball in the poster, and the volleyball is in his museum.

As you wrap around the exhibits, there’s a book full of messages pulled from bottles. Every once in a while, somebody will come into the museum and recognize a message’s author.

“I meet people that know like the notes and bottles. I had a young gal on here one day she was in her early 20s, she was reading the messages. She was like ‘Oh my god! and that was my boyfriend in high school.’ It was a like an eight year old kid who wrote this note in a bottle, that was her boyfriend in high school. Two weeks later, there was a young guy in here and he looked at [the same note] he says ‘I know that guy, he was one of my buddies in high school.’ So just in two weeks I’ve met other people that know people in there.”

The back room is where the real treasures are. He keeps his mammoth tooth in here, and his one-of-a-kind, bell-shaped glass float is kept protected in a glass case. His old bottle of Habushu, a type of sake with a habu pit viper in it, is here and so is part of a space probe that was launched off his property and promptly exploded on takeoff.

One of the items that people always remember when they visit this museum is also kept in this room. It is a pair of slippers. The story goes, one of his plumbing customers found a lone slipper on the beach. It has a name on it, Mr. Closkey. It’s counterpart was nowhere to be found. But one year later when John is walking along the beach, he stumbled across the other slipper, also with Mr. Closkey’s name on it. The pair is hanging on the walls of this room, reunited forever.

He’s pretty good at identifying the items that he finds. But when picking up everything off the beach, sometimes there’s a lot of unknowns.

John says, “a lot of my things were IDed by customers. I had an old timer come in here and he was looking at thing I had and I didn’t know what it was. He said, ‘I know what that as he says that’s a life raft radio from World War Two. A Gibson Girl life raft radio.’”

John says, “He was a Navy pilot in World War Two in Alaska. He said if you’ve had to ditch your plane in the ocean and eject he says that life raft rejected with that radio and you had to swim to it to radio for help. And in all these years it washed up on the beach here.”

And this stuff doesn’t just sit around and collect dust. Sometimes he wears the hats that he finds on the beach. He uses washed up plates and forks and Nalgene bottles for picnics and when he built his house 30% of the lumber he used was found on the beach.

He says beachcombing is a nice community. There are Facebook groups where people can share their finds. And if you’re interested in beachcombing, John says the best advice is to just get out there and start looking.

“Get your pack and get up early in the morning and go to some remote beaches. Get a big building to put it in. Hope your wife lets you haul it all home.”

This story was produced as part of Northwest Public Broadcasting’s Centennial. Celebrating the people, places and things of the Northwest.

This is one of John's favorites
John lets his sense of humor come out when titling some of his exhibits Here he has Wilson's Cousin Voit on display
Many times John will find multiple of the same items washed up on shore, like these doll heads. When this happens, it is most likely the result of a cargo container spill
He says these are filled with mop strings. Makeshift buoys like this are used to keep packages of drugs afloat in smuggling operations
John made this for his children
The skull from a juvenile Gray Whale. John has found enough whale bones over the years to reconstruct a nearly complete skeleton
'The Walking Man' One of the driftwood sculptures in the museum. Deb Anderson makes most of these
A nearly-pristine pair of Nike sneakers. The Great Nike Shoe Spill of 1990 happened when a hurricane hit a cargo ship. John says in the years to follow, beachcombers were giving Nike shoes as gifts to just about everybody
Many tropical and coastal plants produces floating seed pods that are carried by the ocean to new places to put down roots. John has many different species of seeds. He kindly gave me one called a sea heart to take home with me
If you ask John the item he finds the most of? "Lighters."
Just some of the antique glass buoys from his collection. He has hundreds of these
Just some of the thousands of hats john has found on the beach. His love of collecting started with hats long before he became a beachcomber, with a collection of over 3,000
John repurposes many of the items he finds. Here he is in a chair swing he made from a buoy. He says, "it doesn't fit him well."
He started combing the beach in his early 20's
Tags: beachcombing centennial culture Forks human interest