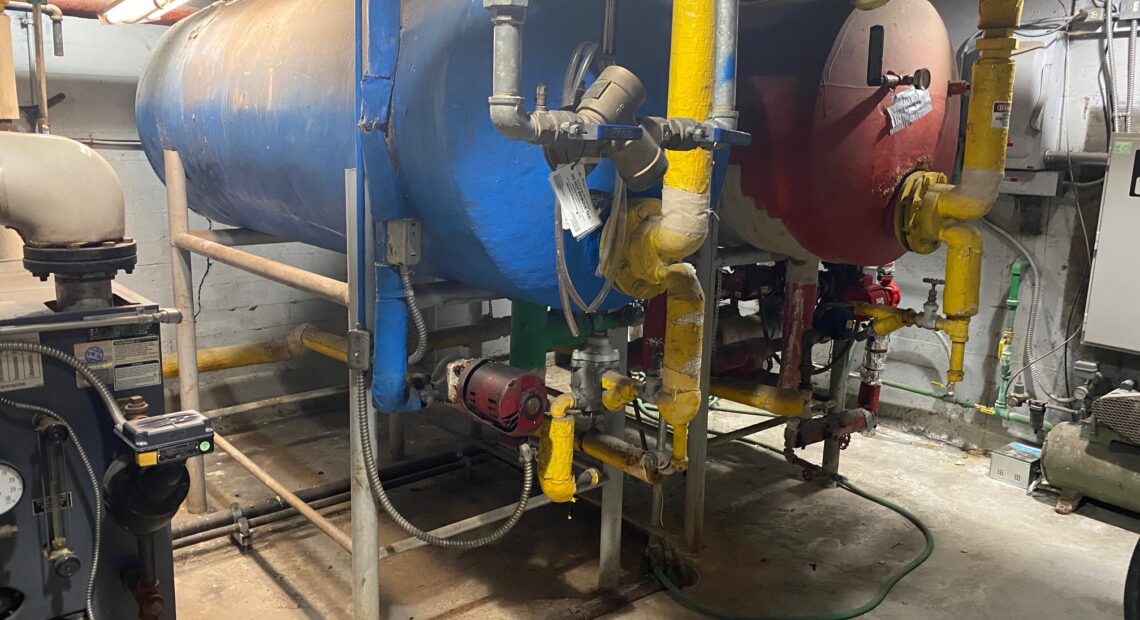 After years of struggling to maintain financial viability, the Garfield County Hospital District is laying out a five-year plan they hope will increase revenue and ensure continued service to the community.

A big part of those goals are replacing the main hospital facility, which was built in 1948, said Mat Slaybaugh, co-chief executive officer.

“One of the biggest things working against us is our facility,” he said. “We are the second oldest building or facility in the state of Washington.”

That building houses the emergency room, X-ray, lab, ultrasound, and business and administrative offices. It was placed on moratorium by Labor and Industries because of inadequate electrical infrastructure, but intervention by the Washington Department of Health allowed it to stay open.

Aside from electrical and space limitations, the building’s heating and cooling is outdated. At a Tuesday presentation in Pomeroy, Slaybaugh pointed to a photo of an old vent at the hospital.

“That’s a vent for a swamp cooler. There’s three of those that are the primary cooling for the hospital building,” he said. “A lot of our offices have nice jerry-rigged, taped-in vents for window ACs so that our offices aren’t 90 degrees in the summer days.”

The heating, though functional, uses a boiler system pulled from an old steam ship at the time of the building’s construction.

Part of the plan would also bring the Pomeroy Medical Clinic to the hospital campus.

The estimated cost for facility upgrades and replacement was initially set at $8 million, though the cost per square foot increased from roughly $400 to $1,000 since the initial projection, Slaybaugh said. About 70% of the cost would be covered by Medicare over a period of 30 years, but the hospital would need to cover the upfront cost.

Electrical upgrades, most of which would occur outside the existing building, are expected to cost $1 million. The hospital has a $1 million grant from the USDA on that front, Slaybaugh said, in addition to $300,000 in other grants.

A debt capacity study commissioned from the business advisory firm Eide Bailly estimated the hospital could take on between $9 million and $12 million in debt.

Existing operational budget, grants and donations would account for a roughly 20% down payment, Slaybaugh said. There is no plan to run a bond for the construction.

In regard to increased revenue, the hospital saw some increase this year, with $282,000 in net profit as of June. A large portion of that came from ultrasound services added in the past year.

Part of that increase also came from more patients getting medications through the 340B drug pricing program, which allows certain providers to offer outpatient drugs at a reduced price. Outpatient care also increased by 31%, and acute care by 123%.

One of the next major additions will include a CT scanner, which is projected to add $300,000 in annual revenue and increase diagnostic and acute care abilities, he said.

The hospital is also looking to increase its lab utilization by changing how patients are billed.

Current prices are on par with other local providers, Slaybaugh said, but because the lab is run through the hospital, fees go toward deductibles rather than a smaller copay. Moving lab tests to the medical clinic would change that, and could make the payment more appealing to customers, he said.

Lastly, the plan includes a goal to develop diabetic programs, which would help serve the county that’s consistently ranked as one of the highest in the state for diabetes.

“We want to look at adding programs for diabetic foot care, nutritional counseling, some of those things to try to support people with diabetes and try to prevent more people from (becoming) diabetic,” Slaybaugh said.