Two Pacific lamprey have made history. The eel-like fish have made it past the Soda Springs Dam on Oregon’s North Umpqua River.

It seemed like a normal Monday morning. Rich Grost pulled his truck into work and went to see what fish had swam past the Soda Springs Dam on Oregon’s North Umpqua River.

He thought he might see a giant 50-pound chinook salmon. What he saw was even better – after nearly 10 years of waiting.

A Pacific lamprey propelled itself through the dam’s fish ladder.

Grost, an aquatic scientist on Pacific Power’s North Umpqua Hydroelectric Project, and an Oregon Department of Fish and Wildlife employee gave each other a high five.

Grost said they’d been waiting for what seemed like forever to see lamprey swim past the Soda Springs dam.

Pacific Power installed this fish ladder in 2012 with lamprey in mind. Lamprey need wet, rounded corners to travel up fish ladders, unlike salmon.

However, while salmon immediately began using the fish ladder, lamprey wouldn’t make it past the dam for another 10 years.

Often, fish ladders are designed with 90 degree angles and jumps for salmon. However, lamprey use their mouths, or oral discs, to suction and jump their way up fish ladders and waterfalls, such as Willamette Falls, said Kelly Coates, the director of natural resources for the Cow Creek Band of the Umpqua Tribe of Indians.

“They just suction cup their way up the falls. It’s kind of a unique move. It requires a lot of core strength,” Coates said, joking about the way lamprey move upstream.

The news of the first lamprey to get past the Soda Springs Dam quickly circulated among the wide group of people and agencies that had worked to get lamprey to this point, around 180 miles inland from the Pacific Ocean.

A few weeks later, a second lamprey suctioned itself to the glass fish observation area, perhaps signaling more lamprey could make the journey next year, said Sam Moyers, a biologist with the Oregon Department of Fish and Wildlife.

“It was pretty late in the season when they crossed the dam,” Moyers said. “Usually, lower in the river, they would have found their little hidey hole to hang out in for the summer.”

Moyers said he hopes more lamprey will make it past the Soda Springs Dam earlier in the season next year.

Pacific lamprey are an imperiled species in the Northwest. Young lamprey spend at least five years in river sediment, filter feeding until they’re able to migrate out to the ocean.

When adult lamprey return inland to spawn, they don’t always return to the exact location where they were born, as salmon do. Scientists believe pheromones play a role in the direction lamprey head, which is one reason Coates said she’s excited to see lamprey making it past the Soda Springs dam. Others could follow their pheromones.

Moreover, Coates said, lamprey, known as xtàan in Takelma, the language of the Cow Creek Band of the Umpqua Tribe of Indians, are a culturally important first food to the tribe. Their lipid-rich bodies provide a good source of protein. Often, people eat lamprey dried or smoked.

“She slept better that night than she had in three nights,” Coat said. “So, I can personally attest to lamprey being good medicine.”

The North Umpqua River is a usual and accustomed fishing spot for the Cow Creek Band of the Umpqua Tribe of Indians. Lamprey haven’t been harvested in this area in a really long time, she said. Harvesting lamprey is an eventual goal once the population is sustainable.

Beyond healing indigenous people, the return of lamprey will help heal the ecosystem, Coates said. In addition to filter feeding when they are young, lamprey provide food sources for other fish. Adult lamprey bring marine-derived nutrients to the streams in which lamprey spawn and die.

The two lamprey that made it past Soda Springs Dam could signal a better future for lamprey in the Umpqua River system, Coates said.

“It’s helping to restore the balance, putting the system back on the trajectory to be healthy and functional,” she said. Getting more lamprey into colder waters will be important as climate change causes warmer waters, said Bob Nichols, the Forest-Fish Program manager for the Umpqua National Forest. During the 2021 heat dome, a tremendous number of lamprey died before spawning in the South Umpqua River, Nichols said.

“The access to cool water habitats are going to be pretty important in the future,” Nichols said.

Lamprey numbers in the Umpqua River system have been depressed since the early 1970s.

Those numbers likely contributed to a few lamprey making it farther upstream into the North Umpqua system and to the Soda Springs Dam, Moyers said.

“This expands their range,” she said.

Barriers in the river, such as dams and culverts, are one of the biggest problems for lamprey, Coates said. The Pacific Lamprey Conservation Initiative, for which Coates is the tribal co-chair, works with landowners to remove or modify passage barriers to make rounded corners.

“Passage barriers are one of the main reasons we don’t see Pacific lamprey in more places,” Coates said. 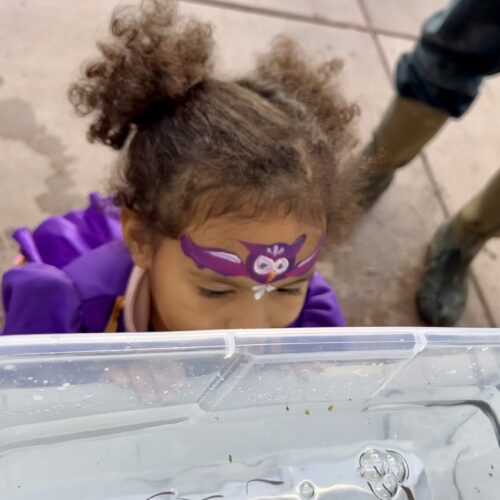 Spiders, scorpions, Pacific lamprey: kids – and adults – get a peek into Washington’s wild side

Jevencia Marshall, 2, peers into a tank of juvenile lamprey at the Screech at the REACH event Friday. CREDIT: Courtney Flatt, Northwest News Network. LISTEN (RUNTIME: 1:00) READ As a… Continue Reading Spiders, scorpions, Pacific lamprey: kids – and adults – get a peek into Washington’s wild side 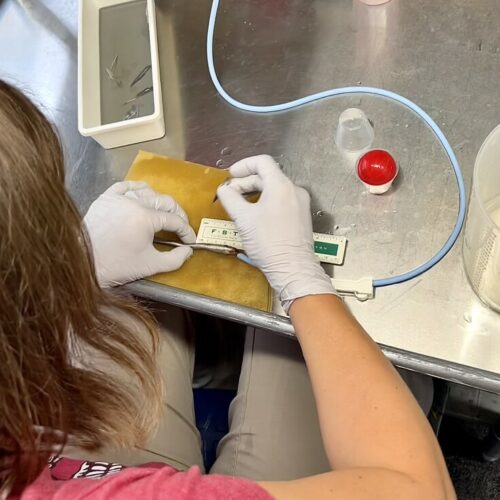