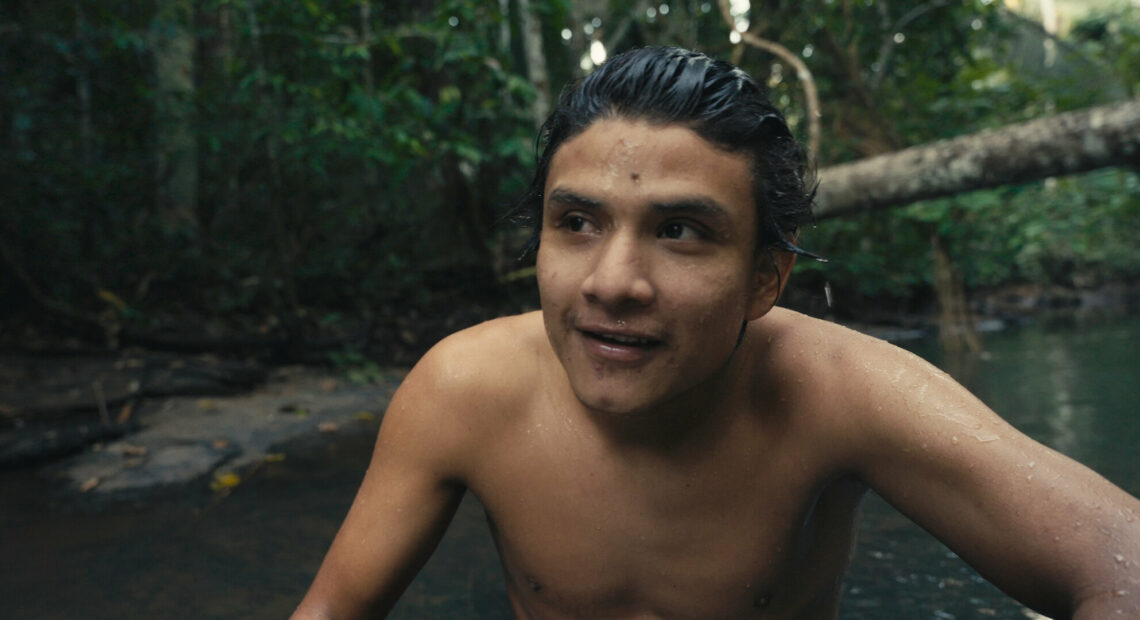 When evaluating a documentary, you might ask several questions. Does the film have a clear protagonist, or several? Does it have a compelling story and message? Does it have substance and depth? Has the director organized the material in a coherent way? In the case of Alex Pritz’s new movie, The Territory, the answers are a resounding “Yes.” It richly deserves its major awards from this year’s Sundance and Seattle International Film Festivals, among many others.

A production of National Geographic’s Documentary Division, it focuses on an Indigenous tribe living–actually, just trying to survive–in Brazil’s rapidly dwindling Amazonian rainforest. The Uru-eu-wau-wau people have seen their numbers dwindle to less than 200 in the forty years since first “contact” by white poachers, settlers and government representatives. They brought destruction to the landscape and disease, most recently COVID, to the native population, which now faces an existential threat.

The Territory has a disarmingly muted tone, which makes its message all the more devastating. Much of that derives from the form of its voiceover-free narrative. Bitaté, a 20-year-old activist and third-generation leader within the Indigenous community, shot much of the footage in the tribal lands, along with fellow community member Tangae. With this “cinéma vérité” approach, the movie proceeds with a sense of increasing drama, even as Pritz and his team provide a larger, no-less-ominous context.

The production took three years to complete, given the pandemic and the scope of its storytelling. It begins in 2018, with the successful presidential campaign of Jair Bolsonaro. His administration has accelerated the reduction of the rainforest, while encouraging the greedy developers, economic “associations” and abjectly poor settlers who have no sympathy for either the government or the native peoples. Sérgio, an itinerant agricultural worker, sees the remaining forest as the “promised land” and complains that the tribes “don’t create anything.” One of the elders responds that “they want us to disappear,” while using the word “genocide.” It’s a toxic mix, and it’s the essence of a modern tragedy.

The Uru-eu-wau-wau, although vastly outnumbered, have their allies. Neidinha Bandeira, a tireless champion of the Indigenous population and their centuries-old home in the rainforest, has cultivated relationships with journalists and local police authorities to try to minimize the worst offenses. As the film points out, her courage has put her and her daughters at physical risk. The bullet holes in a “No Trespassing” sign attest to that. (Alleged poachers have been charged with the murders of British journalist Dom Phillips and Indigenous expert Bruno Pereira in the same region this past June.)

Along with Carolyn Bernstein, an Executive Vice President at National Geographic, lead producing credit goes to Darren Aronofsky. His own feature films as director (Requiem for a Dream, The Wrestler, Black Swan) have often veered toward the melodramatic and the surreal, no more so than Mother! (2017). Its slow-burning psychological horror goes full eco-apocalypse in the last act. Since then, Aronofsky has been working on many environmentally conscious projects such as this. Indeed, he and Pritz, a cinematographer-turned-director, view The Territory as part Western, part thriller.

It opens with shots of industrious ants and playful children, each representing the nature of the conflict about to unfold. It ends with stark views of decaying leaves and disappearing trees. The camera itself becomes a kind of weapon, a testament to a native population (some of them still uncontacted) and a vast ecosystem in critical distress. Ultimately, The Territory does what all of the best documentaries do. It informs. It involves. It resonates.