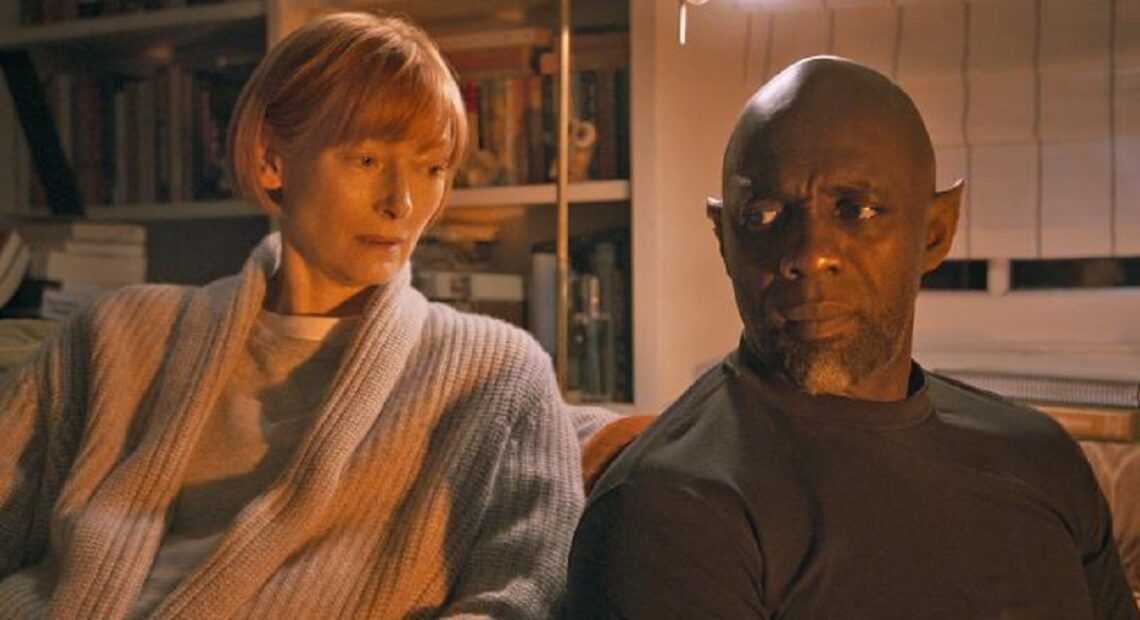 Alithea Binnie, a scholar of mythology, believes in credibility. Then she encounters The Djinn, who spins fanciful and unreliable tales of lost love and palace intrigue. Her independence and his freedom become the themes of the fantasy-romance, Three Thousand Years of Longing.

George Miller, the Australian writer-director of the Mad Max, Babe and Happy Feet franchises, indulges one of his own cinematic dreams here. His latest movie has been gestating for at least two decades, and it betrays his passion for the subject matter. The casting, like the imagery, is inspired, even if the material fails to stretch their talents.

Tilda Swinton plays Alithea as an academic convinced of her own self-sufficiency. She’s alone but independent, absorbed in the fascinating narratives of other cultures which substitute for the lack of passion in her own life. (She did “once have a husband.”) Idris Elba literally materializes in her hotel room as The Djinn, a genie released by Alithea after discovering a small bottle in the Grand Bazaar in Istanbul. When he offers her the chance to have three wishes fulfilled, she hesitates. She doubts. She applies healthy skepticism to every story she hears or reads. After all, her very name comes from Aletheia, the ancient Greek goddess of truth. His subsequent tales expand the film’s universe well beyond the confines of her room, both in time and space.

To their credit, the producers cast a significant number of Turkish/Mediterranean actors for the historical segments, which begin with the Biblical relationship of Solomon and Sheba. Whether serious or humorous, The Djinn’s stories demonstrate how love and desire can often fall victim to accidents and misunderstandings. All the while, the film bathes its subject matter in a rich array of visual effects.

Australian cinematographer John Seale, an Academy Award winner for The English Patient (1996), emerged from retirement a second time in order to work with Miller here. His often gliding, swooping camera, combined with suitably varied lighting and a dazzling color palette (especially the reds) underscore a plot which leans heavily into history and poetry. The copious special effects call attention to themselves, but never distract from the story.

Miller and his daughter, Augusta Gore, co-wrote the script, based on a short story by British author A.S. Byatt published in 1994. It has a structural symmetry and a wealth of suggestive references. For example, the appearances of the fictional Shahrazad Airlines and “The Prophet,” the best-selling book by the Lebanese-American writer-poet Gibran Khalil Gibran. Also, consider the recurrence of “three,” from the wishes and flashbacks to the room number in the hotel. Where the balance breaks down is in the juxtaposition of intellect and emotion.

With an academic as a lead character–a woman who observes that “in some cultures, abstinence from desire means enlightenment”–you would expect a more rigorous approach to the film’s plotting. More substance. A greater emphasis on ideas. Yet Alithea takes a back seat to The Djinn’s fabulous yarns for much of the movie, with the occasional interjection. Where the imbalance ultimately works, though, is in the last act.

Three Thousand Years eventually departs Istanbul for a much less exotic London, but not before the emotion coursing throughout the plot rises to the surface and leads to the consummation of the central relationship. Miller and Seale have choreographed this scene of “lovecraft” in a discreet and imaginative way. The scholar makes an audacious wish–only one–which allows her and the genie to embark on their own timeless tale.

Three Thousand Years of Longing has its share of flaws. The Djinn’s stories will hardly mesmerize you, and the last act in England introduces two odd, dramatically unconvincing elements. However, at age 77, George Miller has clearly not lost his creative edge, and he has several projects in the pipeline, including two more Mad Max films. If you’re looking for a palate-cleansing, time-traveling entertainment featuring a pair of eminently watchable actors (who look good in terry cloth robes), then you may find your own wish fulfillment in Three Thousand Years.