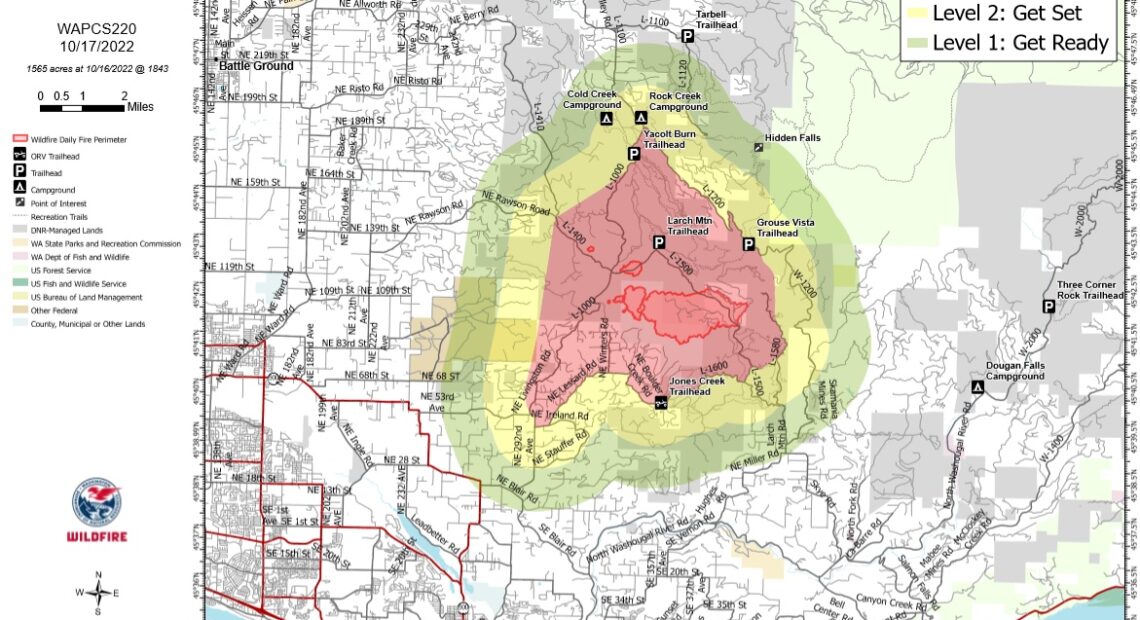 More than 28,000 homes in Clark County are still under level three, or go now, evacuation orders, which haven’t changed since Monday.

“Our first priority right now is containment. We want to keep this fire as small as possible,” Weber said. “The first thing we need to do is build that perimeter around it to keep it at that size.”

The fire has grown to just under 1,800 acres, which Weber said was expected as crews work to establish containment lines.

However, the steep terrain could cause debris to fall on firefighters working downhill. Crews are taking precautions with these new hazards, Weber said.

In addition to the Clark County homes under go now evacuation orders, incarcerated people at the Larch Mountain Correctional Facility, which can house up to 240 men, were evacuated on Sunday to alternative Washington Department of Corrections facilities, according to the department’s website.

Staff at the facility worked with the Clark Regional Emergency Services Agency and Clark County to get everyone to safety on Sunday, said Rachel Ericson, deputy director of communications with the Washington State Department of Corrections.

Until the county’s emergency services agency says it is safe to return, Ericson said incarcerated people will stay in alternative facilities. Family members were notified of the evacuation, Ericson said.

As fire fighting continues, crews hope they’ll get some help from Mother Nature later in the week, Weber said.

“We do have some rain in the forecast, which is expected to come in Friday night,” Weber said. “That will be a huge help to firefighters.”