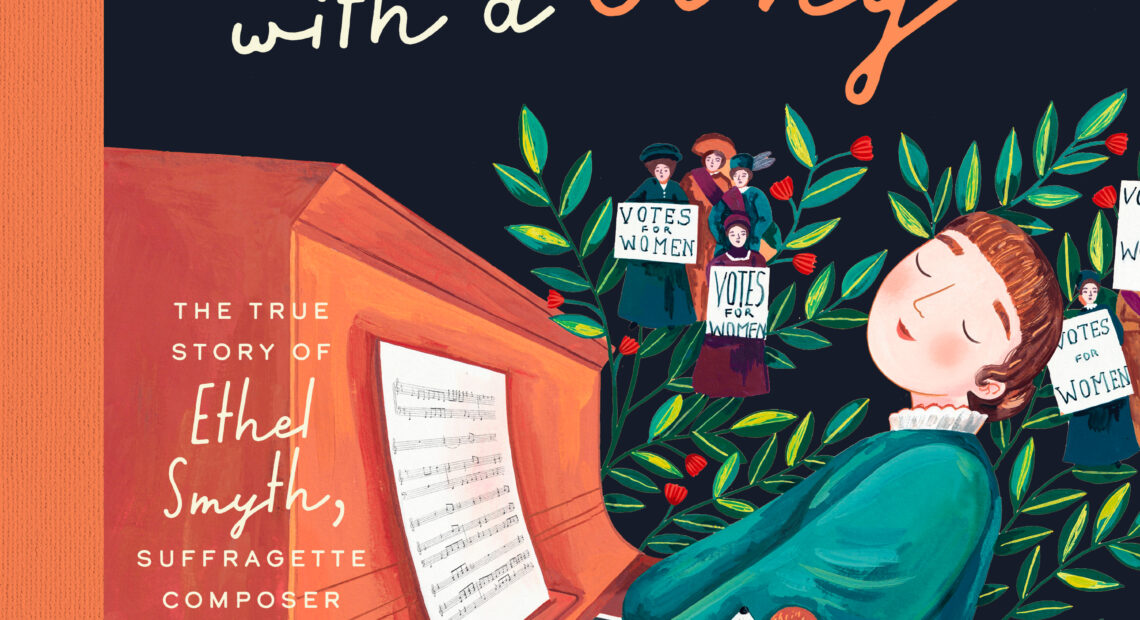 Do you know a girl who bounces across the lawn, no matter what dress she’s wearing? Jumping, singing, climbing trees? That’s the kind of girl this story is about.

That young reader will understand Ethel, who “marched to a different beat,” the picture of joy and curiosity in the proper blue dress that girls like her were expected to wear in the England of the 1860s. The reader will learn that girls like Ethel were supervised by governesses, strict women who expected them to walk only quietly, to speak only when spoken to. Ethel’s governesses kept quitting. But happily for Ethel, and for girls like her in our own time, music comes to the rescue: a piano, a conservatory-trained governess, a Beethoven sonata. 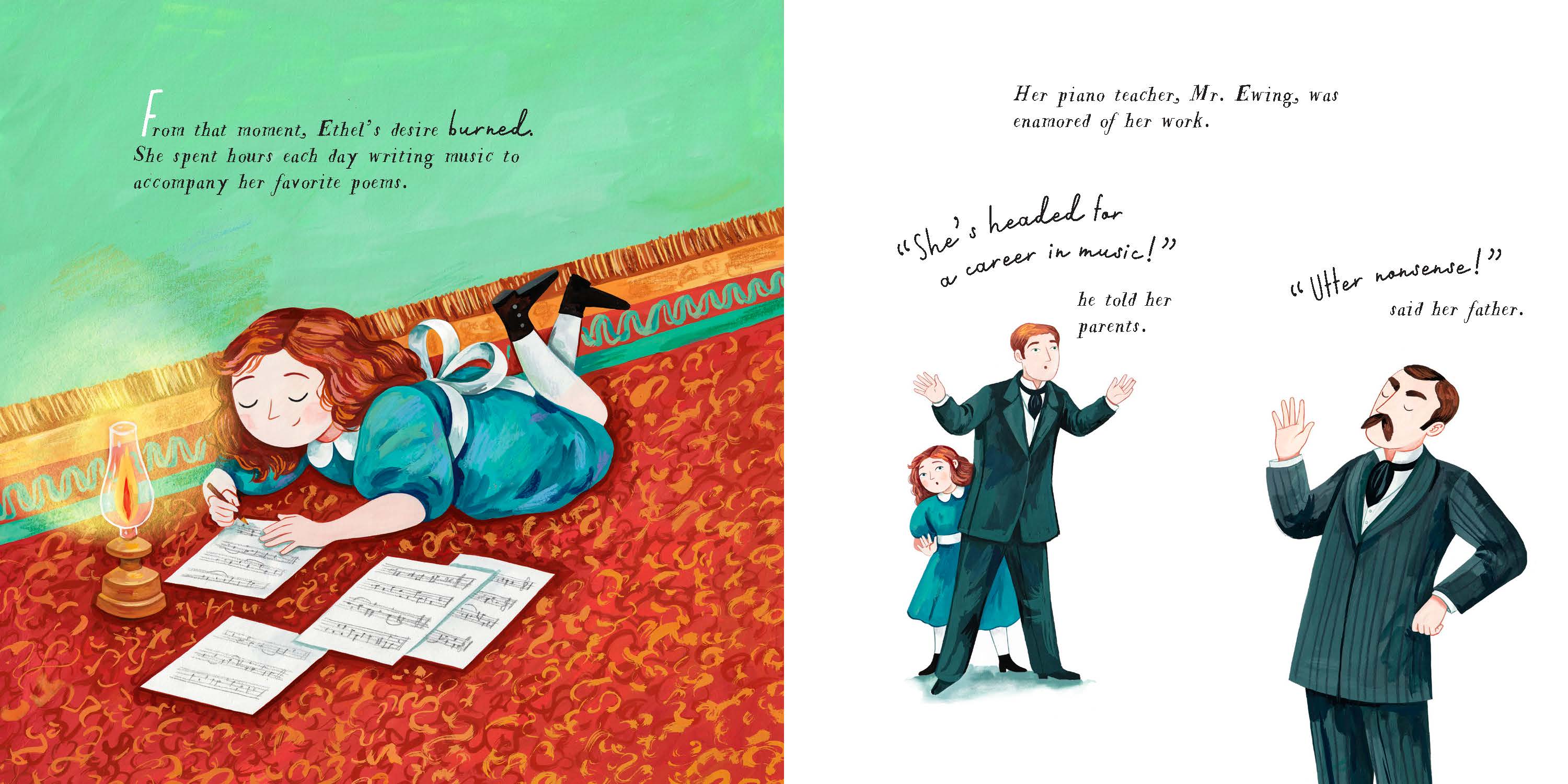 One grownup with music to share may be all it takes to turn rebellion into brilliance. In this bright little book, the phrase “marched to a different drummer” matures, as Ethel does, into the history of a legendary march: the march toward a world that welcomes the full voices and talents of girls—and the votes of women.

Ethel overcomes her father’s resistance and gets herself into a respected music conservatory. But finds she has to put a fake man’s name on the music she writes to get people to even listen to it, much less to play it. It’s an obstacle she will overcome.

Ethel Smyth’s sophisticated chamber music, choral works, symphonies, and operas, in her own name, eventually found performers and audiences. But it is Ethel’s contribution to the movement to secure voting rights (“suffrage”) for women that gets top billing in this story of her life. Jailed with other “suffragettes” in London, she composes “March of the Women,” and yes, there’s Ethel at a jailhouse window, conducting her singers with a toothbrush. Beyond that iconic scene, the March becomes a planet-spanning metaphor for the emergence of today’s world of women, empowered to perform, no matter where their talents take them. 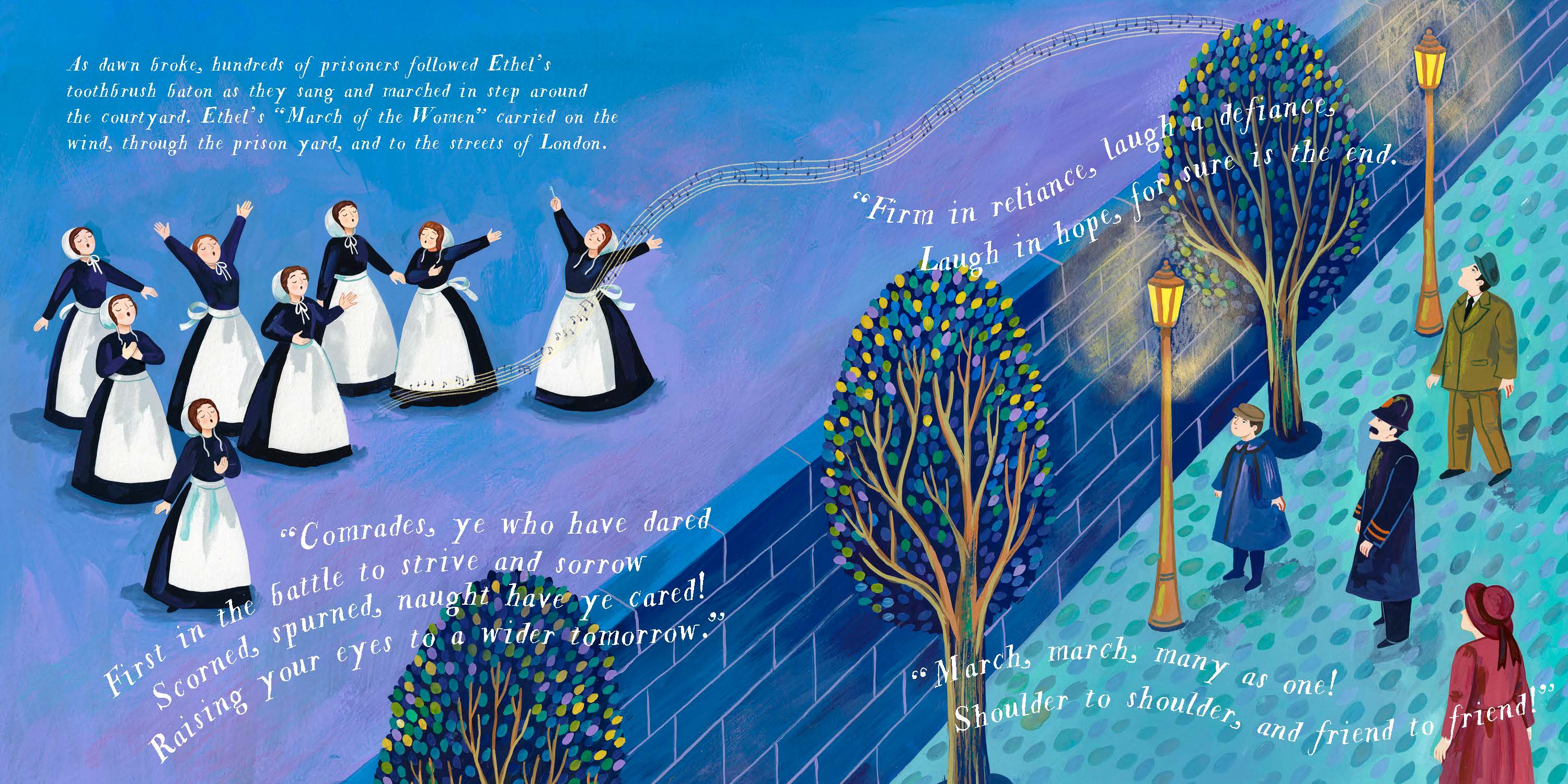 Brava to the illustrator, who moves the story along with Kahlo-bright colors, vivid faces, and whimsical lettering, and to the author, for choosing well among the stories about Smyth. And kudos to all involved, for giving the story a life beyond this book. Did you know that a recording of Smyth’s music was awarded a Grammy in 2021? That’s in the “Ethel’s Music Lives On” section of the book. Rare for a book aimed at the grade 4-6 reader, this appendix provides a timeline of Smyth’s life, a selected list of her works, and a generous bibliography. It’s enough to feed the mind of even a reader beyond elementary school; one who, like Ethel, is always hungry for more.

This is the second children’s book about a noted female musician by Diane Worthey, a violinist/violist in Moscow, member of the Washington-Idaho Symphony. Her In One Ear And Out The Other: Antonia Brico & Her Amazingly Musical Life was an award winner. For the sake of all the little musical girls to come, here’s hoping she’s already looking into writing about another composer who can inspire them.

Rise Up With A Song: The True Story Of Ethel Smyth, Suffragette Composer