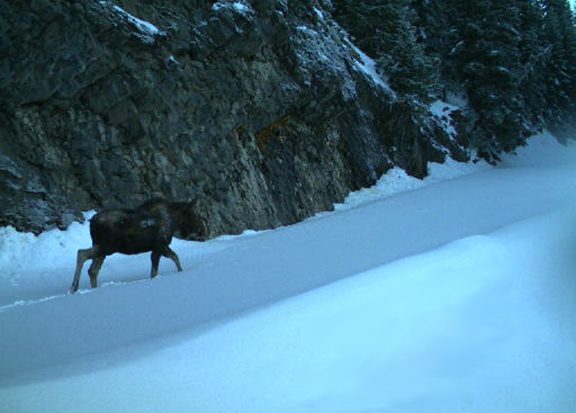 For the first time, a moose has been captured on camera in Mount Rainier National Park. The sighting is also the first documentation of a moose in southwest Washington, according to a tweet from the national park.

Is that a MOOSE? Yes, it’s a moose!!! This is the first recorded moose sighting @MountRainierNPS & southwestern Washington! Could this be same moose recently observed on the I-90 wildlife undercrossing at Resort Creek? Check out @WSDOT’s video https://t.co/LW446Gz0Fu @WDFW -tc/pw pic.twitter.com/TxkahARNbW

The Mount Rainier moose likely wandered into southwest Washington with the help of wildlife underpasses along Interstate 90.

Since 2015, the Washington Department of Transportation estimates at least 20,000 wildlife – from bobcats to snowshoe hares, now, to moose – have used the I-90 wildlife crossings.

What might look like a bridge-to-nowhere across the Interstate at Snoqualmie Pass connects the North and South Cascades for wildlife.

With urban sprawl leading to more concrete and dividing habitat, conservation groups said these types of wildlife crossings are more important than ever – both for the wildlife and for people.

“If you are in a vehicle and you hit a deer or a moose, that’s not going to be good for anybody involved,” said Andrea Wolf-Buck, spokesperson for Conservation Northwest.

In Oregon, wildlife structures on Highway 97 near Bend reduced collisions by up to 90%, according to the Oregon Department of Transportation.

Privately-funded underpasses on Highway 97 in Washington’s Okanogan County also have reduced collisions along a stretch of highway known for collisions with deer, although more funding is needed to complete the Safe Passage 97 project.

Beyond saving lives, wildlife crossings also can save dollars, according to a study from Washington State University. Study authors estimated each wildlife crossing could save between $235,000 to 443,000 annually, depending on the crossing structure type and location.

In addition, Wolf-Buck said, connecting wildlife habitat will be even more important as the climate changes.

“Having something like this beautiful moose show up in a new area just shows that we can still have development and humans getting the things that they need but also keeping in mind how critical it is to consider wildlife and that this is their habitat,” she said.

The Washington Department of Fish and Wildlife estimates there are around 5,000 moose in Washington. Most moose live in the northeastern part of the state, although smaller populations are found in the North Cascades, Okanogan and Blue Mountains.