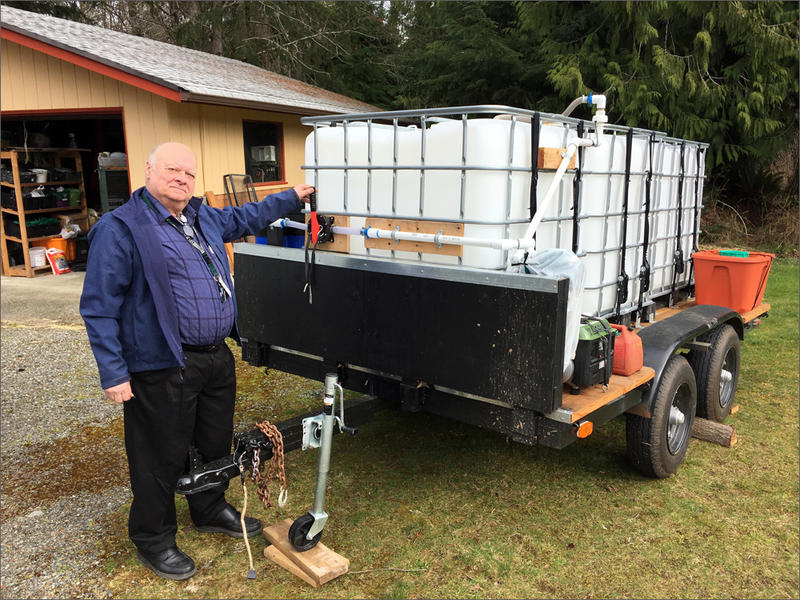 Prep For ‘The Big One’: Building Water Treatment Rigs To Use After Major Northwest Quake

One of the key elements of your emergency kit should be enough drinking water to be self-sufficient for days or weeks after a big earthquake.

Emergency preparedness volunteer Jim Buck and some of his neighbors around Joyce, Washington, have stockpiled cots, sleeping bags, food and first aid supplies in case of The Big One. But drinking water for up to 300 disaster victims at the church shelter proved to be a harder nut to crack.

Statewide disaster preparedness messaging aimed at households and businesses calls for one gallon per person per day as the goal for emergency drinking water. Scooping water out of a creek or pond is dicey because of the widespread giardia parasite, aka “beaver fever.”

“My sense of humor about having 300 people in a gym with diarrhea is just not there,” Buck said. “So we wanted to make sure that we had something that worked the first time, every time, no questions asked, and that’s what we built. “

Their solution is a water treatment trailer made out of repurposed parts including food-grade plastic totes, charcoal filters and a hand-cranked bilge pump.

Buck said several fire districts elsewhere on the peninsula have already copied the design to make their own rigs.

Buck and his neighbors collaborated through a community group, Joyce Emergency Planning and Preparation, to cobble together two water filtration rigs with donated materials. Buck estimated the cost to assemble was around $1,000 to $2,500 each.

The systems produce about six gallons of potable water per minute.

“This was designed by me and one of the neighbors just based on looking at a municipal water system diagram and scaling it down to what we could actually handle here,” Buck said.

Buck, a retired structural engineer and former state legislator, travels throughout Clallam and Jefferson Counties giving talks about earthquake preparedness and the threat posed by the offshore Cascadia fault zone. He tells local audiences to prepare to be self-sufficient for as long as 30 days after a major Cascadia earthquake because landslides, buckled roads and collapsed bridges will make it difficult for outside help to reach the Olympic Peninsula.