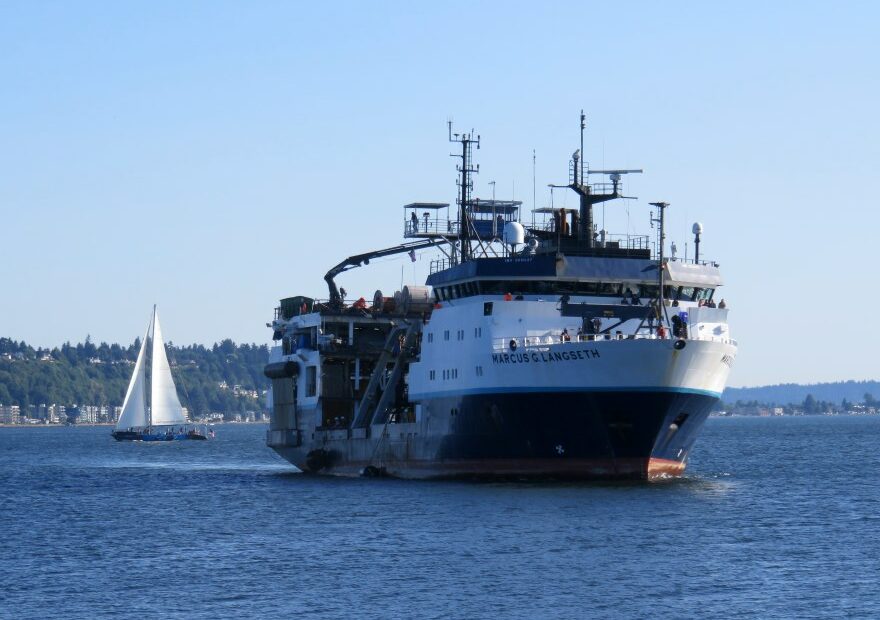 Earthquake researchers are eager to dig into a trove of new data about the offshore Cascadia fault zone. When Cascadia ruptures, it can trigger a megaquake known as “the Big One.” The valuable new imaging of the geology off the Oregon, Washington and British Columbia coasts comes from a specialized research vessel.

The National Science Foundation seismic survey ship Marcus Langseth zigged and zagged for nearly six weeks over the full length of the undersea Cascadia Subduction Zone — from the Oregon-California border north to Vancouver Island. The research expedition departed from Newport, Oregon, on June 1 and returned to shore in Seattle late Sunday.

“It’s going to be a tremendous asset for us to understand Cascadia,” said co-chief scientist Brian Boston of Columbia University, moments after stepping off the ship after 41 days at sea.

Fellow chief scientist Suzanne Carbotte, a geophysicist from Columbia University, said the primary goal was to produce a much sharper picture of the undersea fault zone. Many scientists, including her, suspect two colliding plates are stuck, or “locked” together, building up tension that will be released sooner or later in a catastrophic earthquake.

“For this expedition, we were using modern technology that is vastly superior in terms of what people can learn over the data that had been acquired before,” Carbotte said in an interview. “The imaging that we’re going to get here is going to be in a different class than what we have.”

The expedition used sound to probe miles under the seafloor. A set of underwater compressed air guns directed booming acoustic pulses at the seabed.

“It goes to the seafloor and then penetrates because it has a lot of low frequencies in it and then it reflects, bounces off of horizons in the subsurface, very similar to a 3D CAT scan,” Carbotte said.

The reflected echoes were picked up by receivers on land, on the seafloor and on a 12-kilometer long cable towed behind the research vessel.

This kind of noisy underwater seismic survey work had the potential to upset environmentalists. Ocean activists worry about disturbance to protected marine mammals off the Pacific coast — chiefly, whales.

The lead scientists on the cruise said they deployed lookouts and an advance scout ship to make sure no whales or dolphins were nearby when they were making their underwater racket.

“Anytime that it might become a problem that we might hurt or damage a whale, we immediately shut down the experiment,” Boston said. “It was very much about protecting these species out at sea and not trying to bother them.”

Boston said shutdowns happened infrequently, less often than he thought they would, mainly from encounters with humpback whales.

One of the many researchers excited to dig into the terabytes of data gathered by this seismic survey is University of Washington professor and Pacific Northwest Seismic Network director Harold Tobin. Tobin came down to the Seattle pier to greet the returning ship. He said one thing the much improved imaging of the Cascadia fault zone won’t tell us is when the next Big One will strike.

“It’s not so much that it will help us predict the timing directly,” Tobin said. “What it is going to do is create that understanding of and baseline for what the fault is actually like and then how changes in some property we can measure — like the speed of sound waves through the ground — if that changes over time, that could tell us new things about how the fault is changing its stress.”

Tobin expects lots of other insights to emerge. For example, we could get a much better idea to what degree the 700-mile long offshore fault is segmented into shorter chunks with different properties.

“The reason that’s important is because that could make the difference between one magnitude 9 that rips the whole thing open — or breaks the whole fault — or, a series of smaller earthquakes, still maybe magnitude 8 scale earthquakes, but that would have very different implications for, let’s say, tsunami hazard,” Tobin said.

Improved understanding of the tsunami risk could also come from 3D imaging of the top layer of ocean sediment overlying the tectonic plate boundary. The way the seabed moves or slips in response to a strong Cascadia earthquake starting below it has a lot to do with how bad a tsunami could be unleashed.

Tobin said to expect the first research findings based on the freshly-gathered data to come out next year and continue for years to come.

“We have a lot of mysteries still about the Cascadia Subduction Zone despite all those decades of study,” Tobin said.

The expedition cruise to find answers started with what Carbotte called “a lot of rough spots.” They had issues with balky instruments, and then fishing gear got tangled in the very long “streamer” listening cable. After that, heavy seas tore away the listening cable entirely. It was quickly retrieved and the data gathering got back on track.

“I’m very happy to be back on land,” said Shoushuo Han, the third co-chief scientist on the expedition. Han said the team considered the expedition to be a big success because they ended up acquiring over 90% of their data objectives.

The National Science Foundation provided the primary funding for the research cruise. NSF owns the Marcus Langseth, which is operated by Columbia University. Carbotte said the U.S. Geological Survey was also heavily involved in this project.

The last full rip of the Cascadia Subduction Zone happened in January 1700. The exact date and destructive power were determined from buried forests along the Pacific Northwest coast and an “orphan tsunami” that washed ashore in Japan.

Geologists digging in coastal marshes and offshore canyon bottoms have also found evidence of earlier great earthquakes and tsunamis. The radiocarbon dating of those events makes it possible to estimate the recurrence interval of Cascadia megaquakes at roughly every 250 to 800 years. Since the last one struck 321 years ago, that means the populous Northwest region is within the window for the next Big One.