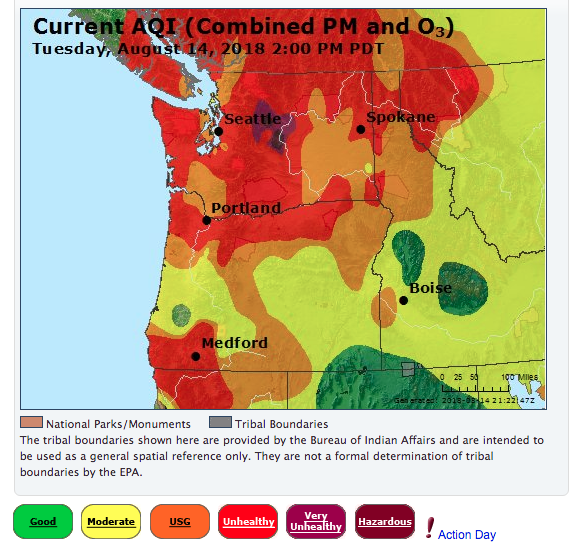 Fires In Canada And California Add To Northwest’s Smoky Haze

Fires across the region have blanketed the Northwest in smoke. Blazes in California and British Columbia are also adding to the thick, reddish-gray haze.

The Space Needle’s panoramic webcam shows a thick layer of reddish-gray haze over Seattle and that doesn’t change much nearly 300 miles east in Spokane. Along the Interstate 5 corridor for 140 miles from Medford, Oregon, north to Portland, the skies are filled with smoke that burns your eyes and scratches your throat. 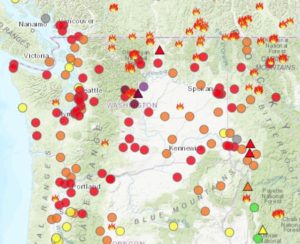 Air quality across the Northwest is mostly unhealthy due to fires in Washington, Oregon, Idaho, California and British Columbia. Screen grab from Washington Smoke Blog Aug. 14, 2018

“We expect this to kind of stick around for the time being,” said Spokane meteorologist Bryce Williams.

“Usually it would take a strong low-pressure system that brings a cold front that could scour out the smoke,” Williams said. “But the fly in the ointment would be the additional fact that we are basically surrounded by fires in all directions, so no matter which way the wind blows it may clear out what we have now, but it’s also going to be bringing in more behind it.”

The smoke has not affected aviation operations at regional airports in Spokane, Salem or Washington’s Tri-Cities. But outdoor recreation is taking a hit. Public pools in Spokane are closed until air quality falls below 150 on the air quality index. In Portland, the pools are open, but some outdoor activities hosted by the Parks and Recreation Department there have been moved inside.