NOTE: This story comes from Crosscut, a part of Cascade Public Media and the EarthFix collaborative, to which NWPB belongs.

Congratulations, jealousy, bewilderment: Usually, a mix of these emotions greets backpackers who score a coveted permit to The Enchantments. Trudging with heavy packs up a 2,000-foot chute of crumbling talus called Aasgard Pass, a constant stream of day hikers keeps sharing variations of these emotions to my crew of mostly first-time backpackers. Seattle’s Joshua Aplaca scored the permit on a first try as a birthday present for his partner, Neal Morton, and invited a few friends along (it’s the first real backpacking trip for most of the group). I’ve tried almost every year for the last nine years and never gotten it. This is only the second time I’ve been invited along with another party. 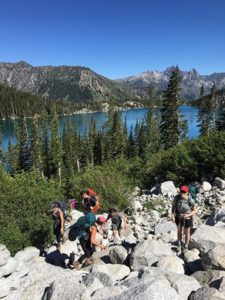 The long march up Asgard Pass in The Enchantments.
CREDIT: TED ALVAREZ

There’s a steady stream of day hikers who pass us, maybe 30 or so an hour. Two of them are wearing Viking helmets. More have had my experience than Joshua’s, meaning that rather than taking their time to huff up this hill, knowing that a campsite awaits, they’re forced to go up and back in a day, or over the top and out another way. Hiking all the way through is 18 miles and about 5,000 feet of elevation gain and 7,000 feet of loss — a monster day by anything but ultrarunning standards. One man from Spokane whose name I can’t catch shouts down at us that he’s enlisted his entire family — parents, brothers, aunts, uncles, infant cousins — to put names in the lottery every year. He’s come up with zilch in eight years of trying.

“I can’t believe you scored one on your first try,” he marvels. His girlfriend shares sour candy as she passes. He turns to his girlfriend and says, “I must be doing something wrong.”

He isn’t. In 1987, to mitigate damage from visitation, the U.S. Forest Service instituted a permit system to allow for no more than 60 people camping in The Enchantments per night during the peak season of mid-May to the end of October. Seventy-five percent of permits are awarded during the lottery, which hikers apply for the February and March prior; 25 percent are awarded day-of. Today, the permits remain as controversial as they are elusive.

As the era of Instagram hiking propagates an aspirational outdoor lifestyle that draws so many to the Pacific Northwest, The Enchantments are a jewel in the crown. But that popularity can precipitate a downfall. Propelled partially by appearances on popular accounts like That PNW Life, places like the Vance Creek Bridge — you know, where flanneled hipsters sit on sky-high railroad ties and dangle their feet over the edge — are now off-limits.

Management of these places — especially wildernesses like The Enchantments — digs into the issues (rampant growth, quality of life, climate change) that will define That Actual PNW life over the next several decades. To ensure the survival of zones like The Enchantments, access and restriction will need to exist in balance — a balance that might be hard to find.

Washington’s Cascades are blessed with plenty of granite wonderlands and picturesque tarns, but The Enchantments stand apart. White stone spires and domes streaked with snow encircle a high alpine basin, and emerald lakes and waterfalls out of a Norse legend decorate the valleys. That’s why Bill and Peg Stark, who were among the first climbers to visit the area in the 1940s, gave the places mythological names — Leprechaun, Sprite, and Gnome lakes. Others are merely apt descriptors: Perfection, Inspiration, Little Annapurna. It’s easy to see why people want to come here.

Lots of them try. According to Forest Service ranger Carly Reed, approximately 50,000 combined day and overnight users visited the Enchantments in 2016. A shade under that visited in 2017, but Reed thinks it would’ve been more if it weren’t for fires and related closures. (As I speak with Reed in mid-August, new fires were breaking out in the region this year, too. At press time, the largest — Cougar Creek Fire — burned nearly 42,000 acres and was 50 percent contained.) For comparison, the Forest Service recorded about 19,000 total visits in 2009.