Under pressure to resign following a new allegation of sexual misconduct, Republican state legislator Matt Manweller on Monday told a reporter from the Columbia Basin Herald that he would resign if re-elected this November.

In his statement, Manweller neither denied what he called the “alleged relationship” nor apologized.

“Last week, media stories broke about an alleged relationship I had 22 years ago,” he said. “As the Kavanaugh hearings have shown, there is no limit on how far back in time one can go to dig up such allegations.”

Manweller went on to say that he would be focused on “creating a safe and healthy environment” for his family. He did not respond to a request for comment from the Northwest News Network.

Manweller’s announcement came less than 72 hours after House Republican leadership called on him to step down following the publication of a story by the public radio Northwest News Network (which includes NWPB) that detailed an alleged underage sexual relationship Manweller had with a 17-year-old former high school student of his from Idaho in 1997. Manweller has denied having had sex with anyone under 18.

“You know, our request was that he resign,” House Republican leader J.T. Wilcox said. “He took the weekend and decided what made the most sense to him, that really is his choice. And for me I wanted to reach a resolution that was dignified for everybody and I think he’s found a way to do that.”

If Manweller is re-elected, local Republicans would appoint another Republican to take his place in the Legislature come January.

Last month, Manweller was fired from his job as a tenured political science professor at Central Washington University. His termination came after a multi-month investigation that found Manweller had engaged in a “pattern of unprofessional and inappropriate behavior” toward current and former female students over a 13-year period. That included allegations of “offering an educational benefit in exchange for sex.”

Manweller denies any inappropriate behavior and has filed a wrongful termination lawsuit against the university and its investigator.

In the story published Friday, a former student of Manweller’s from Wood River High School in Hailey, Idaho, near Sun Valley, said she had a sexual relationship with him that began in the summer of 1997 after she had graduated when she was 17 and he was a decade her senior. At the time, a relationship between a male and a female under age 18 constituted statutory rape, although the statute of limitations has long since expired. 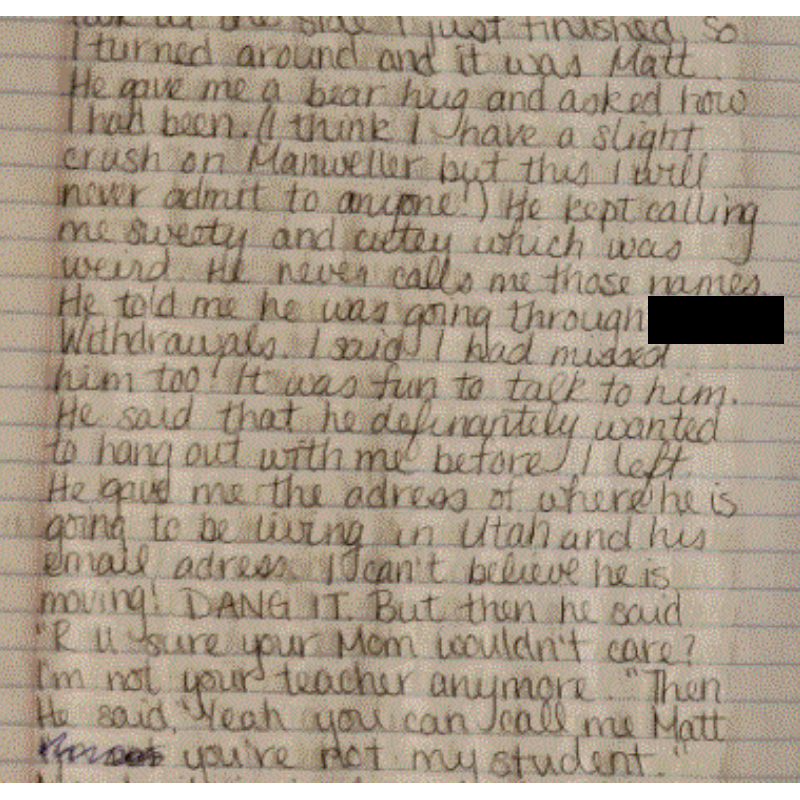 An excerpt of the woman’s journal from June 1997 talks about a Matt Manweller stopping at her work as she was changing the marquee out front. CREDIT: AUSTIN JENKINS/N3

The woman, who asked not to be identified, provided excerpts from her journal at the time as evidence of the relationship, which she says lasted about a year and continued after Manweller had moved to southern Utah to take a different teaching job.

On Monday, she sent the Northwest News Network an additional journal entry that described spending her 18th birthday with Manweller in St. George, Utah.

“Well, I’m officially 18 now,” the woman wrote in her journal on October 5, 1997. She described arriving at Manweller’s house after a long drive and finding that he had ordered the wrong topping for her birthday pizza.

Asked Monday about Manweller’s announcement, the woman—who has said she doesn’t want to be publicly connected to Manweller—said that she felt relieved.

“I think that’s the best thing that I could have hoped for,” she said. “My intent all along has not been to destroy story his life, but to see that other women are protected. And if creating a safe environment for his family entails him getting help, that would be a wonderful end to this story.”

The woman, who is a registered Republican in Idaho, did not indicate what her next steps might be or whether she would eventually allow her name to be used publicly.

Earlier Monday, the full House Republican caucus met via conference call so leaders could brief the members on call for Manweller to resign. Afterwards, a rank-and-file member who asked not to be identified speaking about caucus matters, said the caucus was mostly supportive of the leadership’s judgment as it related to Manweller.

“I think it’s a fair representation that the caucus very much leans with the leadership decision, but there are some members of the caucus that are very, very cautious of jumping to conclusions and turning on our own without hearing the other side,” the unnamed state lawmaker said.

Manweller faces a challenge in the general election from Democrat Sylvia Hammond. In the primary, she only received 37 percent of the vote to Manweller’s 63 percent in the solidly Republican central Washington district.