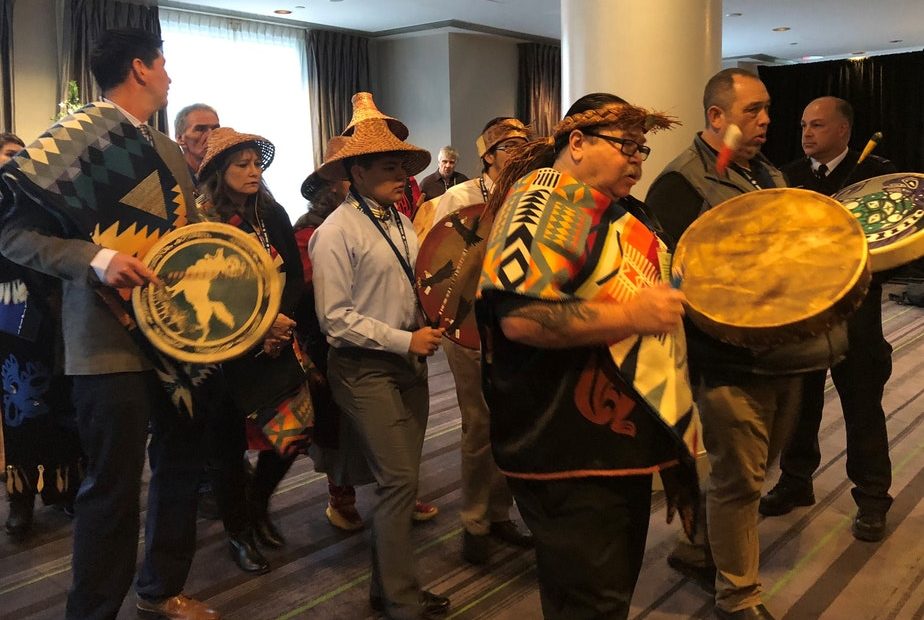 Tribal leaders and members from Washington state crossed the Salish Sea to oppose a pipeline that could bring more oil tankers to waters on both sides of U.S.-Canada border.

The Canadian government wants to expand the Trans Mountain Pipeline and triple the flow of oil from Alberta to the Pacific coast.

Members of the Lummi, Suquamish, Swinomish and Tulalip Tribes made the trip to Vancouver Island to support their Coast Salish relatives north of the border – and their relatives under water.

“Our relatives, the salmon and the killer whales, do not recognize this border,” Tulalip Tribes chair Marie Zackuse told Canada’s National Energy Board at a hearing in Victoria on Wednesday. “As Tulalip people, we share a sacred cultural bond with the killer whales. They are the symbol of our tribe, and it is our responsibility to speak up for them when they are in need.”

Canada’s Federal Court of Appeal halted the pipeline project in August after finding that the Canadian government failed to address the expanded pipeline’s aquatic impacts—from ship noise to oil spills—and for failing to consult with indigenous nations along its route from the prairies of Alberta to the hunting grounds of southern resident killer whales.

Since then, Canada’s National Energy Board has devoted 11 days to listening to indigenous nations all along the pipeline route.

While other interested parties have commented in writing, the board recognizes that much indigenous knowledge is passed down orally, and allows First Nations, as they’re known in Canada, to participate in their traditional format.

Following their tradition, leaders of four Washington tribes started the hearing with a “paddle song” to let the energy board know that they came in peace. But they also said they were ready to fight for the waters they call the Salish Sea.

“I have to come up to Canada and express the fight I have in me to save these species, save our culture,” commercial fisherman and Swinomish tribal senator Jeremy Wilbur said.

With an expanded pipeline, tanker traffic from the Port of Vancouver could increase from the current five ships per month to 34.

Tribal speakers said that passing oil tankers already make it dangerous to be out in fishing boats in the tribes’ traditional fishing areas and that the tankers destroy gear like crab pots and and salmon nets.

“That’s not letting us continue our way of life,” Lisa Wilson with the Lummi Nation said.

According to pipeline operator Trans Mountain, oil tankers will remain a small fraction of the shipping traffic on the Salish Sea, even if the flow of oil through its pipeline is tripled.

The increased tanker traffic would have “a negligible effect” on the frequency of oil spills in the Salish Sea, according to Trans Mountain.

“The operation of project-related vessels is likely to result in significant adverse effects upon both the southern resident killer whale and indigenous cultural uses of this endangered species,” Justice Eleanor Dawson wrote in the August ruling that forced the National Energy Board to reconsider the already-approved pipeline project.

The remaining 74 southern resident killer whales are protected in the U.S. by the Endangered Species Act and in Canada by the Species at Risk Act.

While a major oil spill could have a catastrophic impact on the struggling whale population, everyday noise from boats and ships interferes with their ability to hunt by echolocation. Ship noise compounds the problem of dwindling numbers of salmon for the orcas to eat.

“If you’ve ever been underwater when a tanker, one of these big tankers, or even a ferry, goes by, four or five miles away, you can hear it underwater,” said Wilbur, who earns part of his living in a non-traditional fishery: diving for sea urchins and sea cucumbers. “And not just hear it, you can feel it in your body.”

“One of the many reasons our southern resident killer whales are about ready to go extinct,” Wilbur said.

A two-month-long pilot program last year found that underwater noise levels along the Canada-U.S. border west of San Juan Island could be cut in half when big ships bound for the Port of Vancouver voluntarily slowed down.

A decision from Canada’s National Energy Board on the Trans Mountain Pipeline project is expected in February. 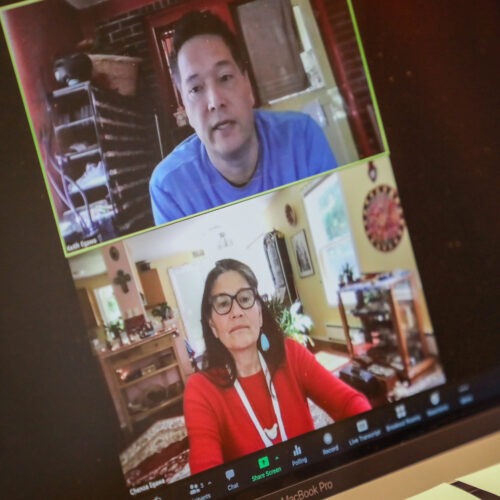 ‘Traverse Talks’ Episode 21: Keith and Chenoa Egawa On How All Of Our Connections Shape Us 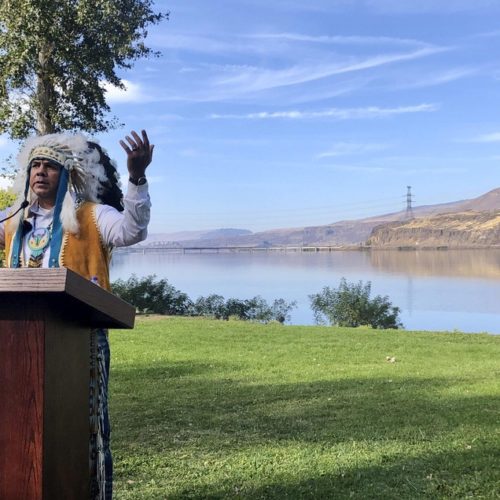 Standing on the banks of the Columbia River, near the remnants of Celilo Falls in the Columbia River Gorge, Yakama Nation Chairman JoDe Goudy traced the history of decrees, congressional acts and court cases that led to the damming of the river. Continue Reading Yakama And Lummi Nation Leaders Call For Removal Of 3 Lower Columbia River Dams