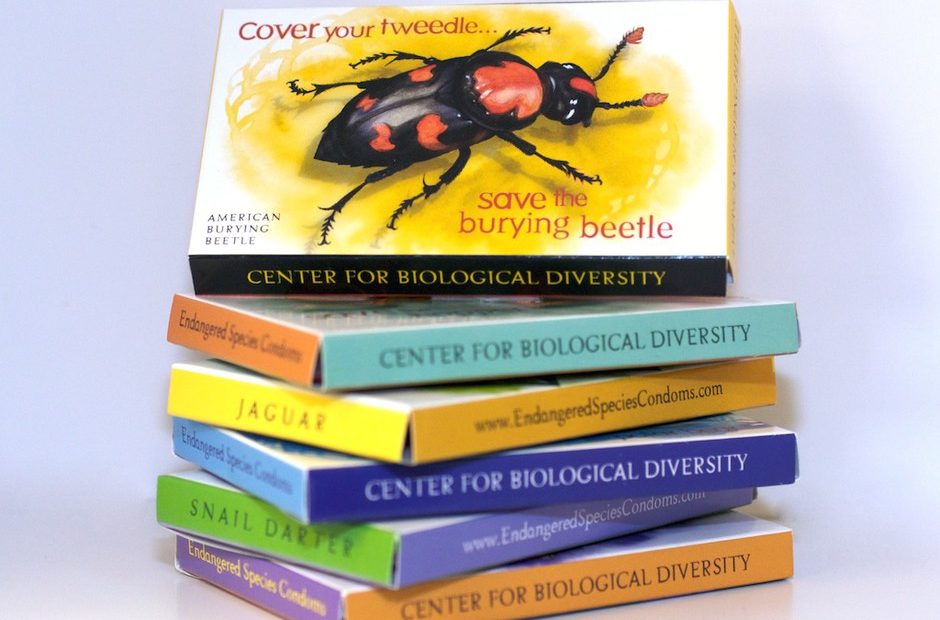 To Save Endangered Species, Conservationists Want You To ‘Wrap It Up’

Before you wrap up that date with your special someone, there’s something else conservationists hope you wrap up as well … for the love of wildlife. They say preventing unplanned pregnancies could actually help save endangered species.

“As our population grows that’s more people that need more resources for food and water and a space to live. We’re competing and pushing wildlife out,” said Sarah Baillie, with the Center for Biological Diversity’s endangered species condoms coordinator.

The center has run an endangered species condoms program for nearly 10 years, with volunteers passing out rubbers at adult-themed events. To clear one thing up, real fast:

“Uh, the condoms are not for endangered species. They’re a way we can help them,” Baillie said.

The packaging is designed to induce giggles and spark conversations, with slogans like this: “Before it gets any hotter remember the sea otter.”

But researchers say there are some real consequences to our planet’s ever-growing population. They say it’s not being talked about enough.

Jeffrey McKee is an anthropologist at The Ohio State University. Years ago, he developed a model to predict how human density affected birds and mammals. The news wasn’t good. A decade later, he found he was right.

“You look at the chart as it comes up on the computer, and you go, ‘Yay, we were right.’ And then it’s like, ‘Oh no. We were right.’ It means we have a very serious problem. We are in a sixth mass extinction right now,” McKee said.

From insects, to wildlife, to plants, McKee said life on our planet is quickly becoming a lot less diverse. He said the best way to help: practice what he calls “responsible reproduction.”

“These are what I call my three pillars. One is education,” he said.

“The second one was widespread availability of contraception. The third pillar is simply the empowerment of women,” he said.

In the U.S., birth rates are actually declining. The Centers for Disease Control recently reported birth rates in the U.S.  have dropped since 2007.

Our expanding population comes from immigration. Some researchers say there needs to be more limits to how many people can move to the U.S. each year.

Philip Cafaro, a philosophy professor at Colorado State University, said the endangered species condoms always get a laugh when he passes them out in class. But, he said, more discussion here should hinge on immigration issues, even if it might not make for easy dinner conversations.

“If you want to stabilize the U.S. population you pretty much have to advocate for less immigration,” said Cafaro. “There are tradeoffs. There are tough decisions to be made about immigration policy, just like all government policies. There are going to be winners and losers. As we think about those issues, we want to make sure that other species just don’t become de facto losers.”

For now, it doesn’t hurt to plan for your big night. To quote from one of those birth-control items we’ve been talking about: “Wear a condom now, save the spotted owl.”