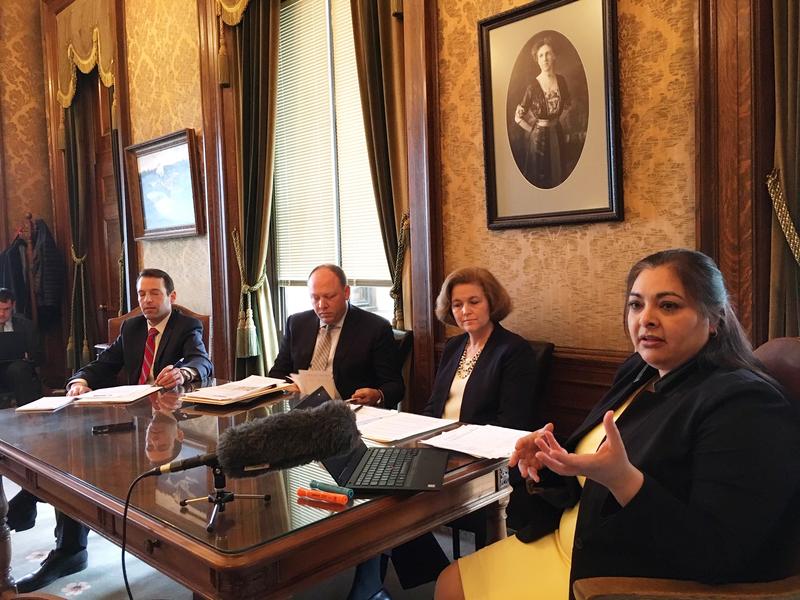 Washington Senate Democrats on Friday proposed a capital gains tax that would fund a suite of tax reductions for low-income families, small businesses and senior citizen homeowners. The tax proposal was rolled out in conjunction with the Senate Democrats’ unveiling of a $52 billion two-year state spending plan, which followed a House Democratic budget presentation earlier in the week.

Under the Senate plan, Washington would enact an 8.9 percent tax on capital gains profits above $250,000 for individuals or joint filers. Profits from retirement accounts, small businesses and the sale of homes, farms or forestry lands would be exempt. Senate Democrats estimate 8,000 “of the very wealthiest” Washington households would pay the tax.

The proceeds from the capital gains tax, an estimated $780 million starting in 2021, would be used to fund several tax cuts including:

While presented in tandem with their budget rollout, Senate Democrats said the capital gains tax is not assumed in their budget and framed it as a stand-alone tax “fairness” proposal.

“Our tax code is broken and we’re trying to put forward a thoughtful proposal that will help fix our state’s upside down tax code,” said Senate Majority Leader Andy Billig.

By separating the capital gains tax from the budget, Senate Democrats are taking a starkly different approach than House Democrats and Gov. Jay Inslee whose budget proposals rely on the new tax as a new stream of revenue.

Supporters of the capital gains tax consider it an excise tax and say its enactment would make Washington’s tax system more progressive by creating a tax aimed at the state’s highest earners. But opponents argue it’s a form of an income tax and have vowed to challenge it in court if enacted by the Legislature.

Washington does not have a state income tax and previous court rulings have said a graduated tax on income is unconstitutional.

Earlier in the week, House Democrats proposed a 9.9 percent “extraordinary profits” tax on capital gains of $100,000 or more for single-filers and $200,000 or more for married couples. They estimated fewer than 14,000 Washingtonians would pay the tax. In December, Inslee proposed a 9 percent capital gains tax with a much lower threshold of $25,000 for individuals and $50,000 for joint filers. At the time Inslee said 1.5 percent of Washington households would pay the tax in the first year.

While the idea of a capital gains tax appears to be gaining traction among Democrats in Olympia, passage this year remains uncertain. House Democrats planned to approve their budget proposal in a floor vote Friday, but are expected to hold off on any tax votes until a final budget deal is forged with the Senate.

In the Senate, Democratic leaders said they are unsure if they have the votes to pass their own capital gains proposal. Democratic state Sen. Mark Mullet, for one, confirmed Friday that he’s a “no” vote.

“To me, passage of a capital gains tax is just going to encourage more spending,” Mullet said.

Separately, Senate Democrats are proposing a tax package that is part of their budget. That package includes a graduated real estate excise tax, similar to ones proposed by House Democrats and Inslee. In addition, Senate Democrats would close three tax exemptions, including the non-resident sales tax exemption enjoyed by Oregon shoppers. Instead of showing an Oregon driver’s license to a Washington retailer and avoiding payment of the sales tax, shoppers would have to request a refund from the state and could only do so once a year. House Democrats introduced a similar change.

Finally, Senate Democrats are proposing a new insurance premium tax that would raise an estimated $125 million over the next two years to pay for fighting wildfires and improving forest health.

The Senate Democratic budget does not include a proposed hike in the B&O tax on professional services, as House Democrats and Inslee have proposed.

Overall, the Senate Democratic tax package totals about $520 million over the next two years compared to the House Democrat’s $1.4 billion, two-year tax plan.

Despite the differences in tax policy, in many ways the Senate’s budget — which would spend about $500 million less than the House budget — aligns with the spending plan House Democrat’s released on Tuesday.

Both budgets include spending increases for K-12 education, behavioral health and early learning. The budgets also dedicate new funding to address homelessness and housing availability and increase the rates for providers of services like in-home care for the developmentally disabled and foster youth who need behavioral services.

“Our overall difference is fairly small relative to the size of the budget and our values are the same so we have invested in very, very similar things,” said state Sen. Christine Rolfes, the chair of the Senate Ways and Means Committee.

Republican reaction to the Senate budget was relatively muted. State Sen. John Braun, the ranking Republican on the Ways and Means Committee, called the Senate spending plan “much more respectful of taxpayers than the House approach.” Still, Braun said he opposed any tax increases in the final budget.

“The Legislature is well-positioned this year to pass a budget that would support major new investments in bipartisan priorities, like special education and mental health treatment, without any new taxes,” Braun said in a statement.

Majority Democrats counter that maintaining services at current levels and fulfilling K-12 spending obligations will eat up the $5.6 billion in additional projected revenues the state is expected to take in over the next two years. In order to fund additional investments in areas like mental health, they say, will require at least some new or higher taxes.

As the House and Senate begin to negotiate a final budget, sticking points could come as the two chambers work out differences over local school levy caps, higher education funding and special education funding.

“There’s a just a lot more conversation to have about special education and how we fund it appropriately,” Rofles said.

Agreeing on a tax package could also prove tricky as House Democrats seem more determined to raise new and higher taxes than Senate Democrats who emphasized their lack of a reliance on the capital gains tax to make their budget balance.

“We funded our base spending plan without a capital gains tax and so I think that gives a lot of flexibility to try to figure out what’s best for the people of Washington and what can we get 50 votes in the House, 25 votes in the Senate and a signature from the governor,” Billig said.

The two Democratically-controlled chambers have until April 28, the last day of the 105-day session, to agree on and pass a new, two-year state budget. If they don’t meet that deadline, the governor would likely call a special session.