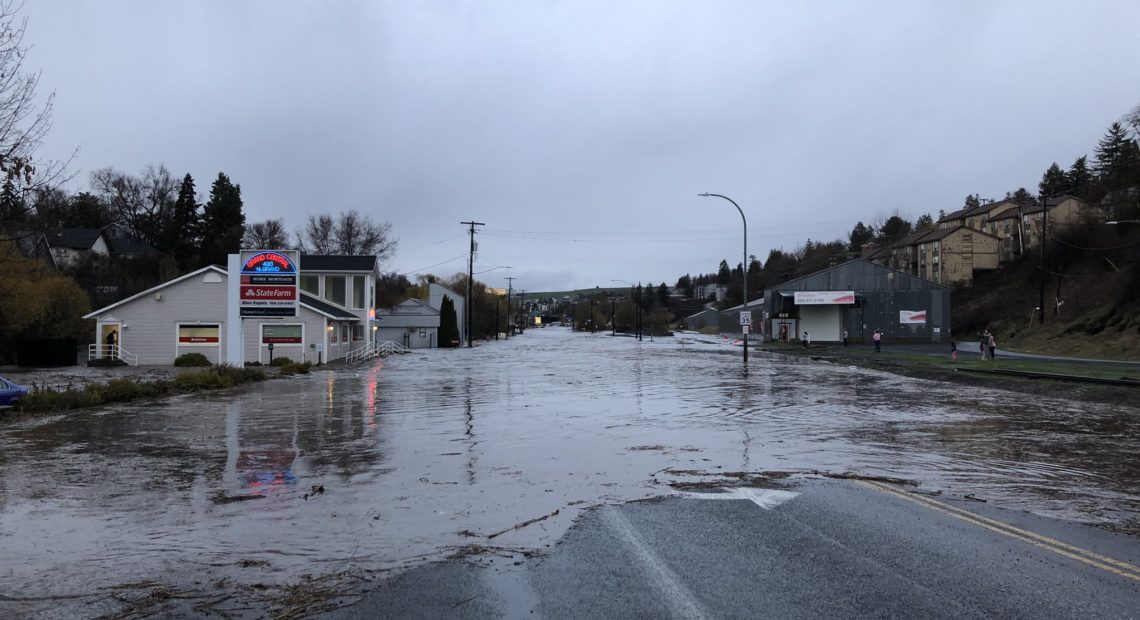 YIKES! Look at what happened here! So many damaged cars and businesses. It’s going to be a tough day for many in Pullman @kxly4news pic.twitter.com/wI9i8NHWre

The National Weather Service says a flood warning remains in effect Wednesday for Paradise Creek in Moscow and Pullman, and the Palouse River through Potlatch, Idaho and Palouse, Washington. Water levels remained near flood stage Wednesday morning but were expected to drop throughout the day to more seasonal levels. 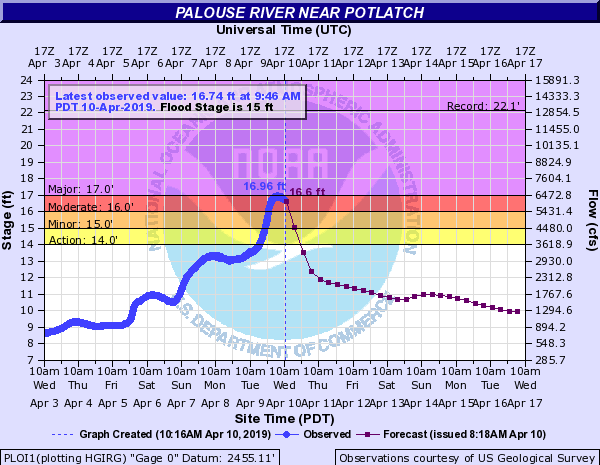 Residents of the Palouse region of southeastern Washington and north-central Idaho experienced flood conditions Tuesday. The localized flooding from heavy rain was expected to persist into Wednesday.

Emergency responders remind people not to drive in, walk into or otherwise enter flooded areas.

The National Weather Service in Spokane said the river was expected to remain above the flood stage of 7 feet Tuesday night before receding Wednesday morning. At that stage, minor flooding would occur in low-lying roadways, residences and businesses near rivers and creeks.

Heavy rains on the Palouse are producing faster than expected rises on the South Fork of the Palouse River near Pullman. Here is the latest forecast showing minor flooding is expected shortly. The river will fall below flood stage before daybreak. #wawx pic.twitter.com/RS8bbJ3I3Q

The Moscow Pullman Daily News reported that the Palouse River between Palouse, Washington and Potlatch, Idaho was expected to rise Tuesday night into Wednesday:

At 15 feet, extensive flooding of the low-lying areas between Potlatch and Palouse will occur. Flooding will occur at the Lions Club Community Park and Hayton-Greene Park in Palouse at this stage. South River Road will likely be flooded where it crosses the Palouse River at Wellesley Road west of Potlatch. The Potlatch softball and baseball fields will also start to flood.

Emergency personnel in Pullman responded to people trapped in businesses along Grand Avenue.

The heavier rains from earlier today are beginning to taper off around the Pullman/Moscow area. This will allow the flood waters along the Missouri Flat Creek to slowly recede. A flood advisory continues until midnight for the smaller rivers/creeks in this area.  #wawx #idwx pic.twitter.com/IUTb8i3Sei

This is a developing story and will be updated as conditions require.