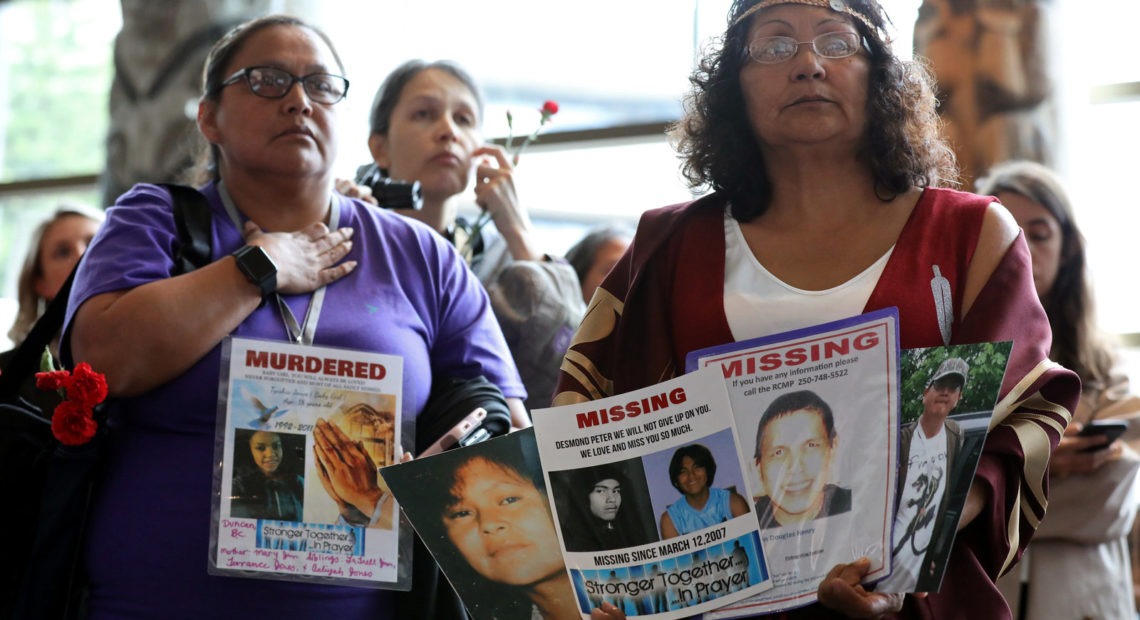 ‘Genocide’ Has Been Committed Against Indigenous Women And Girls, Canadian Panel Says

A years-long government inquiry says human rights abuses “perpetrated historically and maintained today by the Canadian state” has led to violence against Indigenous women and girls that amounts to genocide.

It’s the conclusion of more than two years of research involving at least 2,380 people who shared their stories or artwork with the National Inquiry into Missing and Murdered Indigenous Women and Girls.

At a ceremony detailing the findings early Monday in Gatineau, Quebec, Indigenous community members cheered and wept. Indigenous peoples in Canada have long expressed frustration that violent acts against their communities were not adequately investigated by authorities.

RELATED: Missing And Murdered On The Yakama Reservation

“The significant, persistent and deliberate pattern of systemic racial and gendered, human and Indigenous rights violations and abuses — perpetuated historically and maintained today by the Canadian state, designed to displace Indigenous Peoples from their lands, social structures and governance and to eradicate their existence as Nations, communities, families and individuals — is the cause of the disappearances, murders and violence experienced by Indigenous women, girls, 2SLGBTQQIA people, and this is genocide,” Chief Commissioner Marion Buller said at the ceremony.

The steps to end the violence, the report states, “must be no less monumental than the combination of systems and actions that has worked to maintain colonial violence for generations.”

The inquiry was a campaign promise by Canadian Prime Minister Justin Trudeau, who took part in Monday’s ceremony. In a statement, Trudeau said his government would thoroughly review the report and “develop and implement a National Action Plan to address violence against Indigenous women, girls, and LGBTQ and two-spirit people.”

The inquiry put forward a lengthy list of recommendations, named Calls for Justice, that it said Canada has a “legal imperative” to implement. Trudeau vowed that the government will turn these demands into “real, meaningful, Indigenous-led action.”

As NPR has reported, a 2014 study by the Royal Canadian Mounted Police found that nearly 1,200 Indigenous women were murdered or went missing between 1980 and 2012, and government ministers have said they believe the actual number is far higher.

The National Inquiry didn’t quantify the number of missing and murdered in Canada, instead concluding that “thousands of women’s deaths or disappearances have likely gone unrecorded over the decades.”

The report views the violence as a product of a long history of oppression. “Violence against Indigenous women and girls is a crisis centuries in the making,” the report states. “The process of colonization has, in fact, created the conditions for the crisis of missing and murdered Indigenous women, girls and 2SLGBTQQIA people that we are confronting today.”

Trauma from government policies toward the Indigenous community, it says, are a catalyst for violence — policies such as separating children from their families and forcing children to attend government-sponsored schools for purposes of assimilation. Violence also stemmed from the economic and social marginalization of these communities and a lack of will by the government and other institutions to make concrete reforms.

“In the justice system, the health care system, child welfare, and in other situations, witnesses commonly described an institutional culture that makes women and 2SLGBTQQIA people feel as though the violence they’re experiencing is due to their own personal failings, rather than recognizing that these challenges are a reflection of the way their own institutions contribute to colonial violence,” the report states.

RELATED: Missing And Murdered On The Yakama Reservation

The government has not listened enough to Indigenous community members and what they think might help end the violence, according to the inquiry. The dozens of recommendations put forward ranged from global to local in scope — such as calling on the government to fulfill its obligations under international law and asking Canadian officials to help provide access for Indigenous communities to connect with their own cultures.

The report also urged the governmen