Oregon Senate Republicans will return to work Saturday following a nine-day walkout, setting the stage for a weekend where lawmakers sprint toward adjournment.

As expected, Senate Minority Leader Herman Baertschiger Jr., R-Grants Pass, announced in a press conference Friday morning his members would be in the building at 9 a.m. Saturday. That comes after Democratic leaders offered assurances a sweeping climate change bill, House Bill 2020, will not pass this session.

Baertschiger had strongly suggested in an interview OPB earlier Friday his members were prepared to get back to work.

With Republicans’ presence seemingly assured, the question becomes how quickly lawmakers in both chambers can pass more than 100 remaining bills before they are forced to adjourn Sunday at midnight. Baertschiger said Friday that his party would decline to grant a blanket rules suspension that would allow all legislation to be fast-tracked.

Though he repeatedly professed to believe Democrat promises the bill was dead, Baertschiger said Republicans worried such a suspension could lead HB 2020 to be brought forward at the last minute. He said his party would grant suspension for a portion of bills.

Baertschiger also signaled his party wants the Senate to take up budget bills first. That’s not likely to be warmly received by Democrats, who have insisted that remaining policy bills be passed before the Legislature takes up bills to complete a state budget. They say giving up those bills would amount to another concession, in a year when Democrats have already scuttled bills on climate change, guns and vaccines in the face of Republican walkouts. 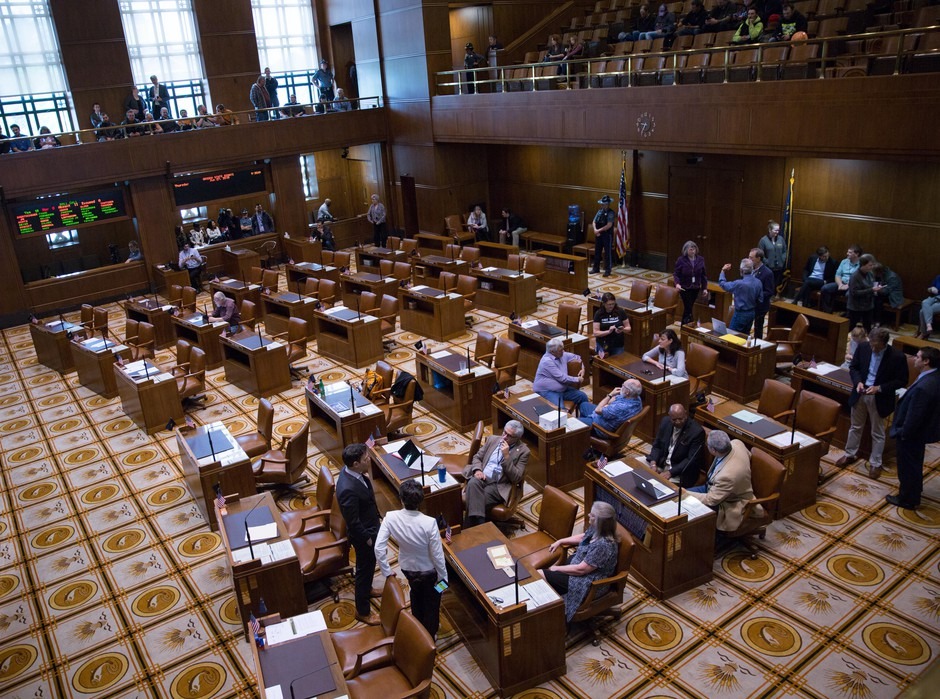 Democratic members of the Oregon Senate stand in the mostly empty Senate chambers at the Oregon Capitol in Salem, Ore., on Thursday, June 27, 2019. On the eighth day of a walkout by Republican senators, Oregon Senate President Peter Courtney adjourned the session shortly after it began due lacking the required number of senators to meet a quorum. CREDIT: Bryan M. Vance/OPB

“Most of those [bills] are good,” Baertschiger said of remaining policy proposals. “There are a handful of bills that we are having a conversation about, but I think that … those need an up-and-down vote.”

He declined to specify what legislation he was talking about, but Republicans have opposed proposals to allow driver’s licenses to undocumented immigrants, and to speed up a possible election to decide the fate of a new business tax, among other things.

Baertschiger said he’d be against walking off the job over remaining bills, but that his caucus would need to discuss the matter. And he put any potential delays that would leave vital work unfinished at the feet of Democrats.

Republican senators walked off the job June 20, in order to block a vote on HB 2020, a proposal to cap the state’s greenhouse gas emissions and charge companies for their pollution. That bill was declared dead earlier this week, but behind-the-scenes dickering has continued between leaders of both parties.

One concern Republicans raised: HB 2020 is scheduled for a vote, and will need senators to take some action in order to get it off the Senate calendar. That’s led Republicans to worry Democrats could pull last-minute trickery. Top Democrats have said that’s preposterous.

“I’m really glad that we’re going to be able to go back to doing the people’s work, and get the remaining 140-ish policy and budget bills moved forward,” said Sen. Elizabeth Steiner Hayward, D-Beaverton, a co-chair of the Legislature’s budget committee. “I was relieved to hear Sen. Baertschiger’s statement that he, at least, thought they went out over 2020 and that it wasn’t appropriate to start bringing up a lot of other bills.

In the press conference, Baertschiger offered a timeline of events, charting Republicans’ decision to walk out and deny Democrats a quorum for the second time this year. He called such boycotts “something that should never be used until we get it to a point we no longer will talk.”

Baertschiger said he was the only member of his caucus who did not initially support walking away from the Capitol, but that he eventually agreed.

Once Republicans did leave, Baertschiger described threats from the governor, senate majority leader and house speaker that Republicans’ budget priorities would be axed if they did not return. Gov. Kate Brown has said her office made no such threats, but did impress upon some officials in Republican districts that a budget could not pass without senators present.

Baertschiger also took issue with the fact that Brown sent troopers to bring Republicans in and with continual $500 fines for each day senators were absent.

“It saddens me that that’s how people govern in this state,” Baertschiger said, adding that Senate President Peter Courtney had never made a threat.

“He reminded me that we had an agreement from the last time we walked,” Baertschiger said, referring to a deal in May that led to Democrats scrapping two high-profile bills.

“It’s one of those things when you’re in the room we all probably had a bit different definition of ‘reset,’” Baertschiger conceded.

Baertschiger also addressed comments by another Republican senators, Brian Boquist of Dallas, who prior to the walkout said that Oregon State Police should “send bachelors and come heavily armed” if they tried to bring him back to the Capitol.

Those comments, and ensuing online activity by right-wing militia groups has created a tense atmosphere — and heightened police presence — in the statehouse. Lawmakers even canceled a Senate floor session scheduled for last Saturday at the behest of state police.

“Obviously [Boquist’s] statement was not helpful,” said Baertschiger.  “There has been a lot of things said by a lot of senators on both side of the aisle when tempers were flaring.”

Republicans’ decision to return to work, will likely be a disappointment to hundreds of people who showed up to the Capitol on Thursday, urging them to stay away. That “Stay Gone Stay Strong” rally drew loggers, truckers and farmers all opposed to HB 2020, and worried Democrats could still attempt to pass the bill in the waning hours of the session.