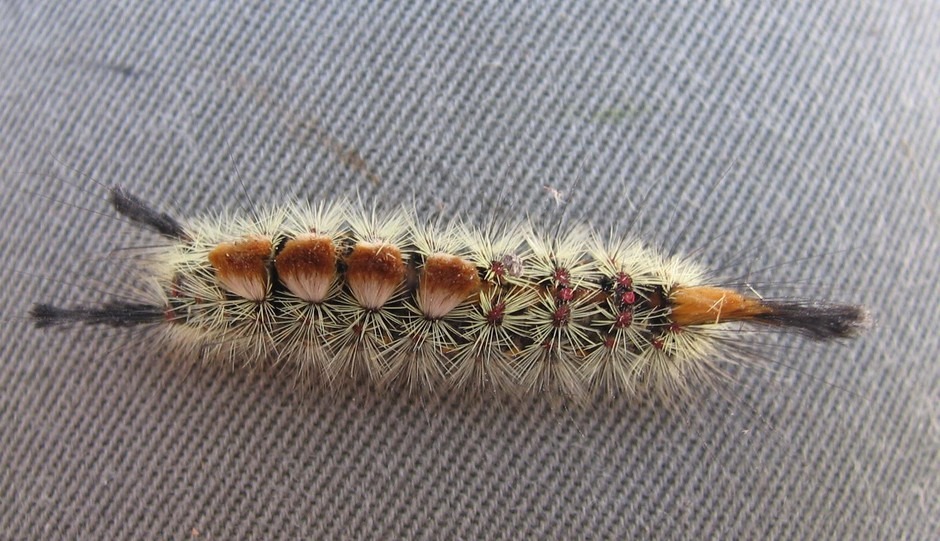 The tussock moth caterpillar is quite the sight, if you’ve ever seen one hanging around a Douglas fir tree. Its brightly colored body is covered in fuzz, with tufts of hair on its back.

“The caterpillars are really quite attractive,” said Connie Mehmel, a forest entomologist with the U.S. Forest Service. “They’re very colorful. They have a pair of hairs on either side of their heads that look like horns.”

But about every 10 years, Mehmel starts seeing too many of these native insects. Too many can be a bad thing.

These hungry caterpillars can eat Douglas fir and grand fir needles, first starting with the new needles that grow as the caterpillars hatch. Later, munching on older needles high in the treetops.

“These caterpillars, when there are a lot of them in the forest, they really can strip a tree from top to bottom. When a tree loses all of its needles in a single year, that tree will usually die,” Mehmel said.

That can mean a lot of dead standing trees, which could fuel large wildfires, Mehmel said. In that way, the situation is similar to a bark beetle infestation. It can also be dangerous for people recreating in forests, which is why they try to treat outbreaks in high-use areas before the caterpillars damage trees.

To prevent too many trees from dying, the Forest Service sprayed goop that’s toxic only to tussock moth caterpillars — it doesn’t even affect other insects, Mehmel said. The mixture is made up of a virus that’s been grown and turned into a powder, combined with water and molasses.

Caterpillars eat the sticky mixture and become infected. When infected caterpillars die, their remains spread the virus onto nearby fir needles.

“Other caterpillars come along and eat it and get the virus. And it causes one after another to die, which will cause the population to collapse. Once that happens, we usually don’t see them again for another 10 years or more,” Mehmel said.

This year’s outbreak occurred mainly near Blewett Pass in Central Washington. Two other campgrounds (one in the Methow Valley and one near Fish Lake) also saw a lot of tussock moth caterpillars.

Oregon has recently seen an increase in tussock moth caterpillars just north of Bend and in parts of northeastern Oregon, said Karen Ripley, an entomologist with the Forest Service based in Portland.

Ripley said about 9,400 acres in those areas showed signs of tussock moth defoliation last year. Officials in Oregon haven’t surveyed those areas yet, but they expect the same defoliation or potentially an increase in downed fir needles this year, Ripley said.

This summer in Washington, researchers used helicopters to spray the virus into the tops of the trees, where the moths lay their eggs. They sprayed a little more than 500,000 acres over two days in June.

It wasn’t always so easy to stop these outbreaks, said Mehmel, who began her forest health career studying tussock moths 42 years ago.

The last serious outbreak, what Mehmel called the “outbreak from hell,” happened in the mid-1970s. Tussock moth caterpillars showed up across Northwest forests — from Northern California up to British Columbia and into Montana.

Then, researchers used the toxic pesticide DDT on about half of the affected acres.

“That was the last time DDT was ever used on the national forest,” Mehmel said. The Forest Service had to get special permission to spray the insecticide because it had already been banned by the Environmental Protection Agency.

That’s when research began to find the virus mixture that’s used today, which was manufactured by a lab in Corvallis, Oregon.

In the next few weeks, Mehmel said hikers may see downed needles in areas near the outbreak.

“We have seen some new defoliation since the spray, but we’re also seeing that insects are starting to die,” Mehmel said.

As you’re hiking, she said, be sure not to touch or pick up the caterpillars. Most people are allergic to the sharp hairs all over the caterpillars, which Mehmel said look like tiny harpoons when examined under a microscope.

People can get rashes from the hairs touching their skin or even have respiratory problems if there are a lot of hairs floating about.

“If there are a lot of caterpillars, and their hairs are in the air, personally, my eyes always get really itchy,” Mehmel said. “Most people are allergic, and they can really cause skin irritations.”

You can help entomologists monitor the tussock moth caterpillars if you see them. Letting local ranger districts know about caterpillar sightings can help researchers know when and where the next outbreak might happen.

“It is hard to predict,” Mehmel said. “When a population only builds up rarely, and it’s hard to find in between (outbreaks), it’s hard to study.” 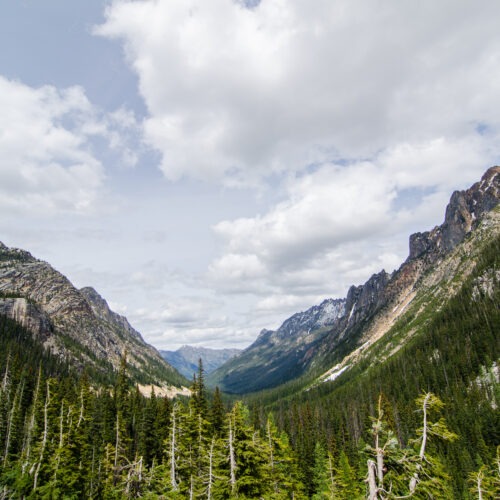