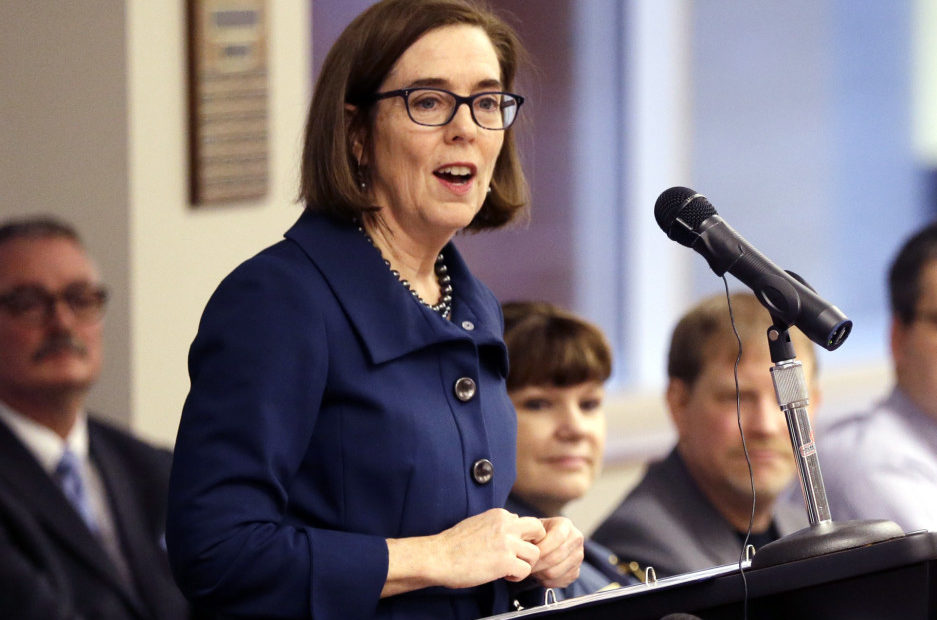 In response to the recent legislative session, Oregon Democrats have cheered a wide array of policy proposals they were able to muscle through with supermajorities in the state House and Senate.

The head of the Oregon Republican Party on Monday took a first step toward forcing a recall election of Gov. Kate Brown, whose term expires at the end of 2022.

In a prospective petition filing with the Oregon Secretary of State, Oregon GOP Chair Bill Currier listed Brown’s support for a cap-and-trade program to curb greenhouse gas emissions and a bill granting undocumented immigrants driving privileges among his reasons for beginning a recall.

Oregon voters overturned a law to give undocumented immigrants driver’s cards in 2014.

“The people or Oregon deserve and expect a Governor that honors the will of the voters and works for the good of all citizens, not just special interests and politically-motivated agendas,” Currier wrote.

The document is one of two recall efforts filed with elections officials Monday — the first possible day to file a recall petition against Brown. The other was made by Michael Cross, a Salem resident who is behind a website dedicated to recalling the governor.

In his filing, Cross suggests Brown “raised taxes mercilessly and spends OUR money recklessly.” Like Currier, he cites driving privileges for undocumented immigrants and concerns about the public employees retirement system as reasons for a recall.

Forcing a recall election is not easy in Oregon. To do so, supporters of the two efforts would need to collect 280,050 valid signatures from Oregon voters — nearly twice the amount required to force a vote on amending the state constitution.

Under Oregon rules, the two groups have 90 days to collect those signatures, assuming documents initiating a petition are “complete and correct.”

“I would describe it as a tall order,” Currier told OPB. “A very challenging task.”

If either effort were successful, Brown would have five days to file a statement of justification. A recall election would be held within 35 days after that.

Word of the recall effort by the Oregon Republican Party was first reported by the Washington Times on Monday.

Currier said his party had made the decision just recently to pursue a recall. He believes that a number of contentious issues supported by the governor and other Democrats this year have created the potential for a coalition that could bounce her from office.

Currier envisions that coalition including groups like truckers and loggers who opposed the cap-and-trade proposal, gun owners who chafed at proposed gun controls, parents who railed against proposed stricter vaccine regulations, and more.

“The political landscape changed dramatically toward the end of the session,” Currier said. “All of these groups, even though there’s not much overlap between them, combine to represent well over a half million voters. And there’s an incredible opportunity to harness that energy and direct it toward the change that they want.”

Currier said his party will use professional signature gatherers to meet the October deadline, and is prepared to spend hundreds of thousands of dollars.

In the document initiating the recall effort, Currier also made explicit mention of Brown’s threat, after the failure of the cap-and-trade bill, to implement new greenhouse gas regulations via executive order.

“She has threatened to usurp legislative power with executive orders to implement her failed legislation, deciding single-handedly what is best for Oregon,” Currier wrote. “This is not the Oregon way.”

The governor’s office did not immediately respond to a request for comment.