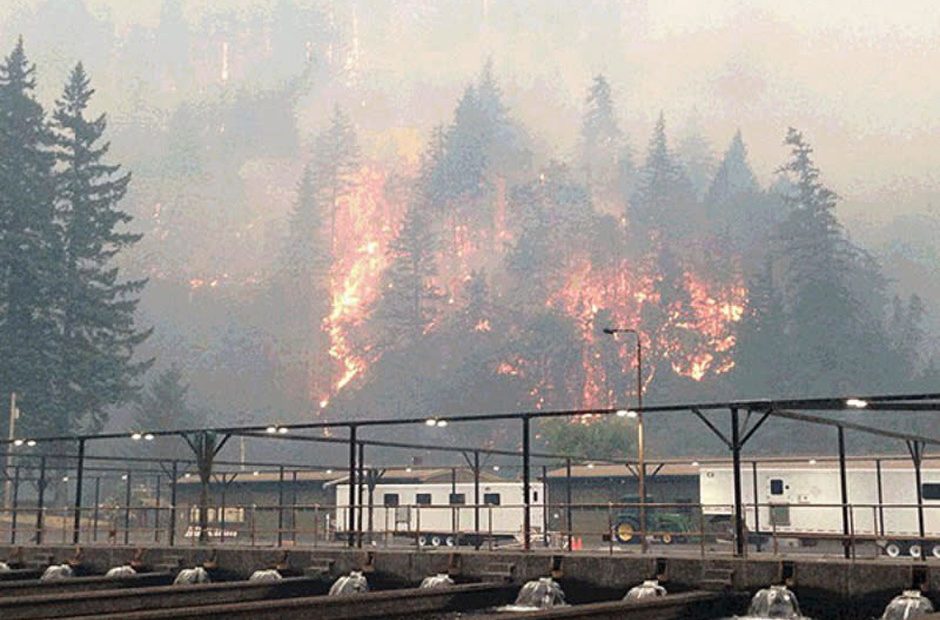 Oregon state lawmakers abandoned a multimillion-dollar project to develop early warning systems for earthquakes and wildfires, and scientists warn that the funding shake-up could endanger public safety and put Oregon further behind other West Coast states in preparing for natural disasters.

Researchers were shocked when nearly $12 million to expand ShakeAlert and AlertWildfire — early warning systems to help detect significant earthquakes and wildfires — unexpectedly went up in smoke last month, just days before the end of the legislative session. Money for the projects was included as part of a larger funding package, but was stripped in a last-minute amendment.

Disaster preparedness has continually been a focal point as Western states are poised to enter the hottest and driest months of wildfire season. And two massive earthquakes in remote areas of Southern California this month reminded the public it’s only a matter of time before the next destructive quake hits.

“We don’t know when the next big earthquake or wildfire will strike, but we know it will happen at some point,” said Douglas Toomey, a seismologist and earth sciences professor at the University of Oregon who helps run both early warning detection systems. And Oregon is “woefully” unprepared, he said.

Gov. Kate Brown, who included the $12 million in funding for the projects in her proposed budget last year, has told reporters the decision not to expand the early detection systems was one of the “biggest disappointments” of this year’s legislative session.

ShakeAlert and AlertWildfire are designed to detect natural disasters as they start and alert responders and the public before significant damage occurs. They are managed by a consortium of public universities and funded through state, federal and private partnerships.

In Oregon, the programs are in the initial phases and need significant state investments to expand to a point that they’ll be useful to the public, Toomey said.

AlertWildfire is a system of cameras stationed in some of the most remote and fire-prone parts of Oregon, Nevada and California. It has provided critical information to first responders in over 600 fires during the past three fire seasons, allowing firefighters in some cases to contain blazes before they spiral out of control.

ShakeAlert, meanwhile, is a sensor system being built out across California, Oregon and Washington. The sensors pick up on faster-moving but less-damaging energy waves that emerge during the start of an earthquake. They can then sound the alarm before the stronger, more destructive secondary wave, giving people seconds or minutes to prepare depending on the size of the earthquake and their distance from the epicenter.

Other Western states have thrown significant cash behind the two systems, allowing them to build out hundreds of earthquake sensors and wildfire cameras.

Cities and states need at least 75% of their earthquake sensors in place before officials can begin alerting the public through the ShakeAlert app.

Los Angeles became the first U.S. city to make the app available in January. The system could be sending alerts to the rest of California by the end of the year thanks to a $16.3 million investment from state lawmakers.

Additional emergency management funds also have allowed California to expand its use of AlertWildfire, and the state is expected to install 200 to 300 new wildfire cameras by October.

Washington’s ShakeAlert system could be ready by October 2020, and the state contributed $1 million this year to enhance the network.

Meanwhile, only three wildfire cameras have been installed in Oregon, and the state still has to build over 100 more earthquake sensors before alerts can be sent through ShakeAlert.

Without any additional money from the state, ShakeAlert will remain dependent on federal funds. That could mean the system won’t be online until 2021 at the earliest — far later than Oregon’s neighboring states.

State lawmakers didn’t specify why funding for ShakeAlert and AlertWildfire was abandoned, but it’s common for last-minute funding shake-ups to happen based on available resources, according to the office of Sen. Elizabeth Steiner Hayward, who chairs the legislative committee in charge of funding decisions.

Lizzy Atwood Wills, chief of staff to Steiner Hayward, said ShakeAlert and AlertWildfire were some of the many projects not to receive funding this year. Investments are prioritized “within the limited resources available,” she said.

Toomey said he still doesn’t understand why it wasn’t considered a priority, saying the money would have created jobs and attracted additional federal matching funds besides possibly saving lives.

“It feels like the state is demoting public safety,” he said. “There are lives at stake here.”